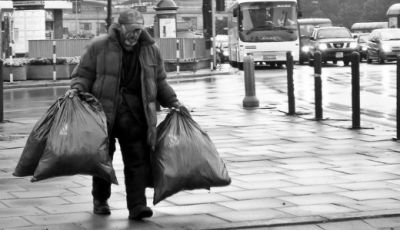 The Census Bureau is reporting that the number of Americans in poverty jumped to 15.1 percent in 2010, a 27-year high. The figure includes many who are unemployed and a lot who are being paid too little to live on.

The number of people lacking health insurance increased to 49.9 million, a new high after revisions were made to 2009 figures. Losses were due mostly to working-age Americans who lost employer-provided insurance in the weak economy. If those that are underinsured are added – those that have insurance but the coverage is so lousy that they can’t afford to use it – the number rises nearly 50 percent to 78 million, according to the Commonwelath Fund.

Most main provisions of the health overhaul don’t take effect until 2014.

The statistics released this morning cover 2010, when U.S. unemployment averaged 9.6 percent, up from 9.3 percent the previous year.

The median – or midpoint – household income was $49,445, a 2.3 percent decline from 2009. However, even worse, median income for African-American and Hispanic families fell far below the $40,000 number, and their median net worth – now entering the fourth year of the Lesser Depression – is near zero, with almost half of families completely underwater financially.

By spring 2011, the number of doubled-up households had increased by 2 million to 21.8 million, 1.3 points from 17 to 18.3 percent. Doubled-up households are households that include at least one “additional” adult, a person 18 or older who is not enrolled in school and is not the householder, spouse or cohabiting partner of the householder. The housing collapse, and the subsequent foreclosure crisis, has dramatically increased the number of people crowding into parents’ or relatives homes to survive.

Young adults ages 25-34, living with their parents, had an official poverty rate of 8.4 percent, softened somewhat by the “doubling up” phenomenon. But if their poverty status were determined using their own income, 45.3 percent had an income below the poverty threshold for a single person under age 65

The poverty rate increased nearly 2 percent for children younger than 18.

It’s hard to point to any aspect of the economy that’s getting better. President Obama’s jobs plan, supporters say, needs to be passed immediately – every day lost is costing lives.

This article originally published on PeoplesWorld.org.