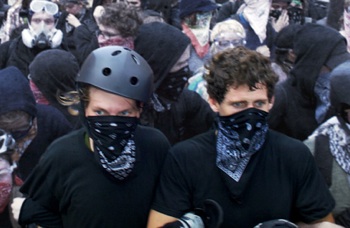 Bosom friends David McKay and Bradley Crowder bore the brunt of an outrageous preemptive measure on the part of the FBI to secure the proceedings of the 2008 Republican National Convention in St. Paul, MN. Eager to protest in a significant demonstration against government wrongdoings, these two young men fell in with Brandon Darby, a forceful left-wing activist who made a name for himself during the aftermath of Katrina for the uncompromising aid he and his grassroots organization Common Ground Relief provided the abandoned people of New Orleans. Over the following years Darby’s beliefs shifted radically, though, and his role in the build-up to the RNC proved that of an undercover FBI informant. Assuming the role of mentor, he coaxed McKay and Crowder toward an agenda of violence, which led them to the fabrication of Molotov cocktails that set up their arrest.

Stuck in the expressive register of a TV special, Better This World unravels the thwarted crime-and-punishment narrative of the two on the uneasy middle ground between a very personal story and a case study of brave new justice post-9/11. The former would have benefited from a more reflexive approach, revealing the filmmakers’ involvement in the lives of the McKay and Crowder families, while the latter only touches upon extremely wide-ranging questions of judicial liberty. One of these pertains to the role of informants, whose duties used to be limited to listening and reporting. In candid, clear-eyed assessments of their accountability, McKay and Crowder convincingly assert that, had they not come under Darby’s provocative alpha-male influence, they would never have considered initiating a violent intervention.

Given secret service resources invested in the two-year preparation of the RNC’s safe keeping, the arrest had to stick and two kids who made a mistake had to depicted as terrorists out to hurt people. (The federal prosecutor handling the case legitimizes Darby’s action with the suggestion that an informant of his caliber could have helped prevent September 11.) Failing to drive a rift between the two friends by offering to let one off the hook at the other’s expense, the government holds the possibility of ridiculously long jail sentences over their heads to avoid going to trial and suffering the exposure of all evidence.

Consequently, each accepts a plea bargain conditional upon absolving the authorities and Darby – now a right-wing commentator – of any culpability in the way they were treated. Crowder finished his two-year sentence in 2010; McKay will be released after four years in 2012. Could there be a more poignant parable of contemporary political activism in this country? Two boys from the Bushes’ home town of Midland, TX embrace a culture of protest only to find themselves identified as domestic terrorists. Better This World unceremoniously reminds us how the dangers that have come to beset America over the past decade lie deep within.