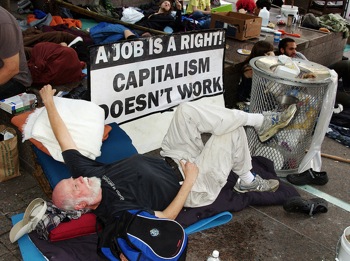 The occupation of Wall Street is in its 10th day. Our numbers have bolstered and momentum continues to build. Occupants continue to work around the clock making media, cleaning, meeting, discussing and dreaming. On Saturday 9/24 over a thousand people marched in solidarity from Liberty Plaza to Union Square. We are drawing members from organizations and movements from around the country and the world to this liberated square in the center of the world’s economic engine. I’ve talked to folks from Colorado, Chicago, California, Spain, Iran – this is truly a global movement and everyday a constant stream of people come and go and mix up the culture of ideas present here. We have started a “People’s Library” and are holding more and more teach-ins about activism and nonviolence. We are still holding two General Assemblies daily and discussing in a completely transparent and democratic process what our next steps should be. The air is thick with conversation even late into the night, and a walk through Liberty Plaza with open ears reveals the diversity of thought and opinion here.

The situation with the police remains mostly non-confrontational, with a few major exceptions, namely with Saturday’s march. About 100 were arrested on that day alone and a few were even pepper sprayed in the streets. After the march arrived at Union Square, the NYPD deployed large orange nets and trapped about 50 marchers on 12th Street between 5th Ave and University Place. All were subsequently arrested and held in city buses until their arraignment. It is a supremely dehumanizing tactic – the activists here refer to it as “kettling” – where marchers exercising their basic right to free speech and assembly are rounded-up en-mass, no questions asked. I myself narrowly avoided being caught in one of these nets. Many of the activists feel that these arrests could have been avoided if the march had been better planned. There was some confusion as to what would happen next when we arrived at Union Square. One group of marchers wanted to continue to the UN some 40 blocks uptown, while others wanted to return to Liberty Plaza. This gave the NYPD ample time to swarm around us and deploy their nets. Even the march itself felt a bit chaotic, winding against traffic and turning seemingly at random to our destination. The issue, of course, has been brought up at GA and hopefully a better plan of action will be implemented next time. When those arrested return to Square, the people erupt in applause and chant “Welcome home.”

Frayed nerves and high tensions overtook the Plaza on Saturday night as the police presence suddenly exploded. A line of police cars and paddy-wagons could be seen stretching for blocks down Broadway and what seemed like hundreds of police officers with plastic handcuffs hanging from their belts surrounded the park, ready to sweep through with nets and batons. A mild panic ensued, fed partially by the events on the streets earlier that day and a round of notices of “acceptable behavior” distributed to occupants and posted around the Plaza by officials earlier that morning. Emergency evacuation plans were announced during GA. Many of us were sure that it would be our last night in Liberty Plaza. We were ready to be arrested or relocate. Speculation was pouring from every corner of the Plaza that 10pm would be the time when they moved in. We lit candles and placed them around the perimeter of the park and drummed and danced louder than ever. But 10pm came and went and gradually the impenetrable wall of blue and white and flashing lights dissipated quietly. We’re still not exactly sure what happened, but we are thankful.

On Sunday we all turned into temporary shrinks. There were no marches, and the GAs were mostly short and to-the-point. It was a collective unwinding day. We talked and reflected about the previous day, and wondered why we had been so brutalized on the street and then spared later that night in the Plaza. Was it the less-than-PR-friendly media coverage (finally) of the violent arrests? Was it the owners of the Plaza that called off the raid? The NYPD itself, or maybe the City? We didn’t know, but we were healing by doing what we do best – talking it out. Eventually our healing gave way to food and drums and dancing. Reflecting with a new friend, I asked what he thought Saturday’s arrests and close call meant for the occupation. He looked at me with sincere eyes and said “It means that now this is real.”