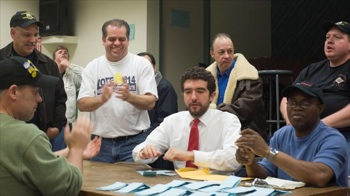 The 43 locked-out art handlers at Sotheby’s, all members of Teamsters Local 814, sent their message loud and clear – negotiate now – to management at a rally on August 26, where their ranks were swelled by hundreds of Teamster women in town from across the country for the annual Teamster Women’s Conference.

“If they don’t settle, we’re going to shut this place down,” Hoffa thundered to the crowd, promising the 1.4-million-strong international union’s support for the locked-out workers, which he said will include throwing up pickets outside Sotheby’s offices as far away as London.

Jason Ide, the local’s president and himself a former art handler for the company, painted a picture of a greedy corporation that has refused to bargain fairly with its workers, instead locking them out of work on August 1, in the midst of contract negotiations.

“This company sells art and antiques to some of the richest people in America. This company made $690 million in gross profits last year,” Ide said angrily to the assembled workers, who chanted “Teamster power!” and “No contract! No work, no peace!” “And when we went to the bargaining table, they said that’s for us, not for you.”

Among its demands, Sotheby’s, which just had its most profitable year ever in its 267 years of business and whose CEO, Bill Ruprecht, is paid approximately $60,000 a day, wants the art handlers to give up their 401K plan and work a reduced 36-hour week, effectively a 10 percent wage cut. The company also wants to cap workers’ overtime, eliminate certain titles that pay more, and, in initial bargaining, wanted workers to give up their right to sue over charges of discrimination.

Elethia Fray, a member of Teamsters Local 848 in Los Angeles, where she works for MV Transportation, was in New York for the women’s conference. She joined the rally because “we have to stick together as Teamsters. It’s a family.”

“It’s wrong that they’re taking the money for themselves and not giving it to the employees,” Fray said of Sotheby’s tremendous earnings. “They locked them out. That’s just wrong.”

Like many of his co-workers, art handler Roger Ousley, a member of the union’s negotiating committee, suspects the company is out to bust the union.

“They came in with a plan to bust us by hiring Jackson Lewis,” Ousley said, referring to Sotheby’s retention of the country’s most notorious anti-union law firm. “To hire them – that really wasn’t called for.”

As for negotiations, Ousley said that they have continued intermittently during the lockout, but no progress has been made since the company refuses to meet for more than two hours at a time.

“They want to say they’ve been negotiating, but they’re really not,” he said. “There’s been no movement.”

The next negotiating session will be on September 12.