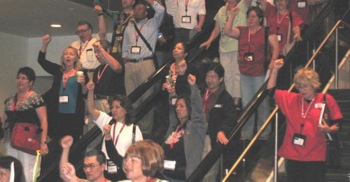 The sudden release of stored energy could easily describe earthquakes, of which we are very familiar in California. But this week, tremors of a different sort will shake the state from north to south.

The sudden release of pent up frustrations from more than 23,000 registered nurses at 34 Northern and Central California hospitals will explode to the surface in a one-day strike on Thursday, September 22.

“The strike at Sutter comes after nine months of failed negotiations,” Deborah Burger, R.N., told me. Burger is president of National Nurses United and co-president of its affiliate, the California Nurses Association.

“We staunchly refuse to be silenced on patient-care protections,” added Sharon Tobin, writing in a CNA press statement. Tobin is a 24-year R.N. at Sutter Mills-Peninsula in Burlingame, Calif. “A common theme throughout management’s proposals is removing our presence on committees that address important patient-care issues and nursing practices.

“Sutter doesn’t want to hear about anything that might cut into their huge profits.”

True to form, just as nurse Tobin suggested, Sutter Health claims that “the union’s proposals are out of touch. Demands like these would add tens of millions in extra costs for patients.”

“We listen to this all the time in bargaining,” Burger responded. “So, we already know Sutter is serious about reductions to patient care and cuts to employee pensions and health coverage.

“And, the same goes for Kaiser.

“For example, 1,400 Kaiser pharmacists, represented by the Guild for Professional Pharmacists, just got a contract that, we strongly believe, contains significant concessions we would not accept.”

In fact, the Guild, an independent union, reports on its website changes to their medical coverage and admits that their pensions are now “frozen.” In other words, previously accrued benefits remain but the amount will never grow because Kaiser will no longer make contributions.

Guild vice president Howard Hertz commented that “the benefit changes Kaiser is trying to impose punish people for their past loyalty to Kaiser … they are not just wrong, but immoral.”

The same contentious bargaining has played out in Kaiser negotiations with the National Union of Healthcare Workers over the last year. NUHW president Sal Rosselli explained the issues to me:

Kaiser has made over $5.7 billion in profits over the last two and a half years, and its executives receive millions of dollars in compensation and as many as eight separate pension plans each. There’s no economic justification for Kaiser’s insistence on cutting healthcare and retirement benefits for thousands of caregivers.There’s even less justification for Kaiser’s refusal to provide nurses, social workers and mental health professionals with the staff they need to provide Kaiser patients with safe and timely access to care.

Kaiser psychiatric social worker David Mallon, an NUHW negotiating committee member, witnesses these problems each day. “For decades, the clinicians at Kaiser have asked for more staff,” he says. “But there has been no fundamental change over the years in the attitude of the financial managers and principal executives at Kaiser: ‘Do more with less, and damned be the patients who don’t get better with what we offer.’ ”

The unholy juxtaposition of record profits and draconian cuts has jolted employees into organizing for September 22, which is expecting to be the largest Kaiser strike and the largest nurses’ strike in U.S. history.

But it does not stop there. There is more history to be made.

Solidarity: not just a slogan

In conjunction with the three-day work stoppage by 4,000 members of the NUHW on September 22, another 17,000 CNA/NNU nurses will join their picket lines on the first day of the walk out.

“Kaiser R.N.s will strike in sympathy and support for [NUHW] Kaiser … frontline workers … to protest substantial reductions in healthcare and retirement coverage,” according to CNA’s press statement.

“In these desperate times, we need each other,” Burger explained to me.

Not so, according to Kaiser Foundation Hospitals and Health Plan spokeswoman Gay Westfall, senior vice president in human resources.

“Simply put,” she said, “Kaiser Permanente is not in contract negotiations with CNA–and our bargaining with NUHW does not affect CNA.”

“Nurses inherently have an affinity for people suffering hardships, people just making ends meet, struggling to provide for their families, postponing or rejecting suggested medical care because they don’t have the money or because of insufficient insurance coverage.

“So, when we hear about Kaiser’s plans for take-aways and reductions in patient-care staffing, we are eager to support our NUHW co-workers and let them know they are doing the right thing by resisting.”

Another 2,000 Kaiser members of Operating Engineers Local 39, AFL-CIO, agree, and have also decided to join NUHW pickets in a sympathy strike.

This makes a total of 17,000 nurses and 2,000 engineers honoring legitimate picket lines of the 4,000 NUHW Kaiser co-workers who originally voted to strike.

The day’s activities also include, it must not be forgotten, another 6,000 CNA/NNU nurses conducting their own separate strike at Sutter Hospitals and Children’s Hospital in Oakland, thus comprising 23,000 total nurses on strike for the day.

It is truly a remarkable example of mass protest and genuine solidarity, long absent from labor disputes in this country, either because of explicit contractual prohibitions, insufficient leadership courage or inadequate membership support.

In the case of the NUHW Kaiser strike, a perfect storm came together by providing explicit legal protections for anyone respecting picket lines (1); by involving bold union leaders; and, most importantly, by attracting informed and determined members through steady rounds of education on the issues.

Burger also tersely observed that Kaiser’s belated concern for patients is completely disingenuous, only intended to mislead the public during the strike.

“We want people to know, CNA has set up patient-care committees at each worksite and at each facility, so that Kaiser can call upon us for any emergency.”

Solidarity for some, division for others

Jim Clifford, a therapist at Kaiser San Diego and an NUHW negotiator, proudly announced in a union leaflet that “psychologists, therapists, social workers, optical workers, health educators, dieticians, speech pathologists and audiologists are united in NUHW and we’re standing up and fighting back.

“And,” he said, acknowledging support from other Kaiser workers, “we’re not alone. If Kaiser succeeds in enacting these cuts, it will affect all Kaiser workers, especially members of the Kaiser Service and Tech and MSW units represented by SEIU-UHW who will soon face the same takeaways.”

But SEIU-UHW leaders do not see it that way.

Their spokesperson, Steve Trossman, told me that “SEIU-UHW [Kaiser] members have their raises and benefits fully protected and guaranteed in their national agreement through September of 2013. Next year we will negotiate a new national agreement in which we will fight for and win pay raises, full protection of all of our benefits, and enhanced job security. We have a plan that we are confident in and we are not going to be distracted by the fabricated claims or desperate publicity tactics of a failing organization like NUHW.”

Trossman’s disparaging remarks toward NUHW underscore his union’s bitter dispute with NUHW over the representation of 45,000 Kaiser Service and Technical workers.

This has only grown worse since the National Labor Relations Board recently accused SEIU-UHW of numerous unfair labor practices tainting the last election in 2010, thus setting up another union election contest between NUHW and UHW in the near future.

Perhaps this rivalry also accounts for UHW’s arguably overstated confidence in its still undisclosed “plan” to convince Kaiser to agree to “full protection of our benefits.”

It certainly seems to me that when unions representing 19,000 workers take the dramatic and unprecedented step of announcing a solidarity strike supporting 4,000 NUHW co-workers, it is ostensibly because there are valid and legitimate concerns about Kaiser’s shameful and disgraceful intentions. Ideally, all unions would follow the example of CNA and OE and support NUHW against management’s imminent threats to cut patient services and employee benefits. It is a mistake to blindly downplay real dangers with a false confidence that assumes “raises and benefits are fully protected and guaranteed” and that mischaracterizes and minimizes legitimate protests as “desperate publicity tactics.”

Serious divisions between unions, certainly in this particular case, can and should be settled through a democratic and fair representation election soon to be scheduled. And all of it can and should also be done without jeopardizing picket line unity at the work site.

(1) In Children’s Hospital of Oakland v. California Nurses Association, 283 F.3d 1188 (9th Cir. 2002), the federal appellate court for the Ninth Circuit (which includes California) explained that the right to engage in a sympathy strike, that is, the right to strike for the purpose of supporting the cause of workers represented by a different union, is a right protected under Section 7 of the National Labor Relations Act, 29 USC §157.

This article originally published by InTheseTimes.com