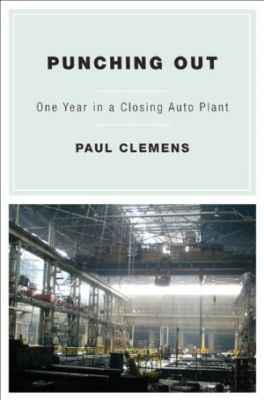 Punching Out: One Year in a Closing Auto Plant
By Paul Clemens
Doubleday, 2011

Paul Clemens’ Punching Out is a dreary but enjoyable read about the closing of a Detroit factory.

The book starts with the last auto part leaving the Budd Detroit Automotive Plant, Stamping and Framing Division. Punching Out’s strength is in Clemens’ knack for sizing up the remaining workers, who are tasked with taking apart the massive assembly-line presses that stamped out auto parts. The members of the core group of laborers and riggers range from immigrants to Arkansas rednecks. Of the Bosnian-born Nedzad, Clemens writes: “He had a bit of a belly, a European pot carried low, suggestive of small consolations after a day’s hard work.” Of the Arkansas Boys: “[They] had dental outcomes consistent with the 19th century English Midlands.”

Clemens finds ghosts of conflicts past in the recesses of the massive factory — such as old grievances from UAW Local 306 over unpaid snow days in 1965 and layoffs in 1983. The author also encounters but does not explore working class anti-unionism among the rigging crews: “Pro-union and anti-union members of the working class can be as difficult to distinguish, for those who haven’t made a study of the schism, as Shia and Sunni.” After two decade-long wars in foreign lands, Americans sense a decline of power. Punching Out documents a decline much closer to home.