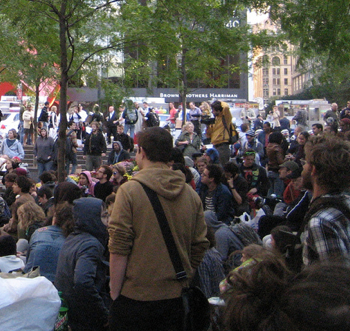 On day 12 of Occupy Wall Street (OWS), I helped moderate a meeting of the “open source” OWS working group by keeping a list of speakers and co-chairing. I am not sure what the open source group is supposed to do exactly, but I decided to attend this meeting after watching a middle-aged man call in the General Assembly for developing demands and goals on the OWS live feed and people in the crowd telling him the open source working group was tasked with this.

After the daily 1 p.m. General Assembly meeting ended, OWS divided into its working groups, including media, labor, outreach, and a number of others. I walked over and sat down next to the point person (or “ leader”) of the working group, a young white guy in his twenties who looked like a 60s throwback with his long, straight hippy-style hair, rainbow tights, fatigue shirt, and Ziploc bag of rolling papers. Of course, you can never judge a book by its cover — he is also a student of behavioral economics and mentioned that academic studies have shown that the OWS’s decentralized, highly participatory, and lengthy process of dialogue is the best way to organize.

The open source meeting swelled very quickly to 20 or 30 people, an indication that a lot of people want to figure out what OWS’s demands should be. The group moderator remarked that the group was so big it was practically a “second General Assembly.” His brief introduction to the process whereby OWS would define its vision (he repeatedly used the phrase “visioning”) was interrupted as many hands went up, asking to be called on; at least 10 people wanted to speak and each was allowed a minute and a half.

What emerged from the discussion was that there is no consensus that demands are even necessary. Quite a few protesters argued along the lines that this is movement or process of dialogue is the demand/goal and that therefore demands are not necessary; one said our demand to the world should that they “join us.” Two older people, one in his sixties, the other in his thirties, spoke out for having clear, specific demands as being a very necessary step to creating a sustainable protest, much less a movement.

I argued that a few concrete, achievable demands were important, citing the “Day of Wrath” protest on January 25, 2011 that began the revolution in Egypt that demanded raising the minimum wage, an end to the dictatorship’s “emergency laws,” the firing of the interior minister, and a two term presidency. I explained that Mubarak’s ouster was not one of their original demands, but it became a demand once millions of people became involved in the movement, and therefore demands can and should change depending on circumstances. My suggested demand was to raise taxes on the 1%, something the New York state legislature and the city council could vote to do immediately.

One woman argued against having demands on the grounds that the media wanted us to do exactly that, that it would be a way for them to put us in a nice neat little confining box the better to ignore us; instead, she proposed we copy the model used to write grant proposals and draw up a mission statement, goals, and objectives. The moderator took to this and we dispersed into six groups of five or so to discuss what motivated us to protest and what our “visions” (or goals, long and short term) were; after the break out, we would reconvene to sum up and share what each of our groups had come up with in the hopes of finding some type of consensus that would inform some sort of statement to the world.

The OWS political process is very participatory, cumbersome, and time-consuming. One strength of their process is that it avoids the top-down control that Wisconsin’s union leaders exercised to scuttle the protests and developing strike wave that shook the state in favor of harmless (and ultimately fruitless) recall efforts.

To participate and help shape OWS politically requires dedicating many, many waking hours every day to ongoing, continuous debates and discussions. This is not necessarily a bad thing but in practice ends up favoring the participation of those who can afford to skip work and/or school for a week or more. With unemployment over 9% (a figure even higher for the 18-25 age group), it should be no surprise that these are the people taking the fight to the enemy’s lair.

It may be that OWS never develops a clear set of demands. OWS seems to be headed toward issuing a general statement akin to the Port Huron Statement by Students for a Democratic Society (SDS) in 1962, although it will probably be less wordy and much darker. Port Huron spoke moralistically of the highly privileged lives led by America’s post-World War Two college students that stood in stark contrast to the conditions facing black and brown people in the Jim Crow south, America’s urban ghettos, and the Third World. Today, students face the prospect of lifelong debt, serial dead-end jobs, and holding two or even three part-time jobs just to keep up with the bills and rent, just like the non-college educated working class.

Whatever OWS decides with regards to demands, they deserve credit for putting their finger on the real enemy and being brave enough to defy the police and break the law to make the voices of their generation heard.

Everyone who can should go and help occupy Wall Street.

Pham Binh’s articles have been published by Asia Times Online, Znet, Counterpunch, and International Socialist Review. His other writings can be found at www.planetanarchy.net