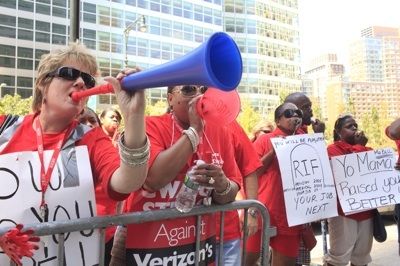 When 45,000 Verizon workers walked out on Aug. 8, rejecting draconian work-rule and benefit concessions demanded by the telecom giant, union officials representing the strikers spoke of a historic showdown.

Greg Chenez, president of Communication Workers of America (CWA) Local 1117, said Verizon’s “demands cover everything we’ve negotiated over the past 50 years and they want concessions on all of it.” Chenez said the company was insisting on “concessions on wages, pensions, medical benefits, work rules, job security, double time, differentials, sick pay, disability payments, reducing vacations, tuition reimbursement and increasing retiree costs for benefits. Their list goes on and on and on.”

Yet two weeks into the strike, even as Verizon appeared to be feeling the sting from growing service complaints, union bigwigs called it quits. Saying the job action successfully got Verizon’s “attention,” union insiders claimed the company agreed to drop some of the more than 100 different concessions it was seeking. But major issues remain on the table, such as making unionized workers pay for healthcare plans for the first time, ending pension contributions for existing employees and switching new workers to volatile 401(k) pensions.

BACK TO THE TABLE
For its part, Verizon, which demanded $1 billion in givebacks from unionized wireline technicians despite posting $19.4 billion in profits in the last four years, was far from conciliatory. After the CWA and the International Brotherhood of Electrical Workers (IBEW) announced it would re-engage in negotiations, company spokesman John Bonomo mocked the picket lines as “theatrics.” Verizon Executive Vice President Marc Reed, whom labor reporter Steve Early describes as a “major architect” of the company’s de-unionization strategy, also took a dig, claiming Verizon only wanted “to convince the unions to begin bargaining in good faith.”

Nonetheless, some labor supporters see hope in the renewed talks. Joe Burns, a CWA lawyer (whose work is unrelated to Verizon) and author of Reviving the Strike: How Working People Can Regain Power and Transform America, said that in most situations when a strike ends without a deal, workers are forced to work without a collective bargaining agreement until one is reached. In this case, the company agreed to have the current pact extended.

“That demonstrates that the strike was having success. It represents the company having to back down,” Burns told The Indypendent. “We haven’t seen a strike like this for years. It’s a very significant event. The question’s going to be: how do you keep up the pressure?”

Burns argues unions need to see the process as more like a chess game and less like a boxing match. He says a strike isn’t about trying to land a knockout blow against the company, but rather it’s a tool in a multi-pronged approach, especially when the company’s war chest is much bigger than the union’s. In this instance, Labor Notes reported that “on the eve of the strike, Verizon announced it would pay a special $10 billion dividend to shareholders.” Meanwhile, the CWA went into battle with a $400 million strike fund that would pay a maximum of $300 a week to picketers.

“From the union side it was more strategic to go back to work,” Burns said. “The point is you need to have tactical flexibility.”

And he might be right for the veteran workers: The unions may walk away with a contract that doesn’t have all the givebacks the company wanted.

THERE IS POWER IN A UNION
But the Verizon strike was also a rare opportunity when union workers could show their might. The strike ended just as service disruptions began to be reported. CWA District 1 Vice President Chris Shelton called the strike a “Wisconsin moment,” referring to the rank-and-file mobilization and occupation of the statehouse in Madison last February against the Republican effort to strip public workers of collective bargaining rights.

Is it naive to think that a strike at a hostile and profitable company like Verizon could be a turning point for private sector labor after three decades of defeat? Not only can this be done, it has been done.

In August 1997, more than 185,000 Teamsters at UPS went on strike, crippling the giant of the courier industry. The company had been creating two classes of workers: full-time workers and an army of part-time workers who averaged $11 an hour. The Teamsters, under the leadership of Ron Carey, elected on a dissident reform slate, spent more than a year organizing members. Issues included limiting subcontracting, fixing hazardous working conditions, raising pay from the bottom up and, most importantly, creating more full-time positions for part-time workers.

HOW TO WIN A STRIKE
With the company not budging during the strike, the union pursued a sophisticated media and outreach strategy, organizing community supporters and other workers to join Teamsters on the picket lines coast to coast. In the end, the Teamsters notched a decisive victory with a contract that included 20,000 full-time job opportunities through new hires and promotions, as well as pay increases and caps on subcontracting. The fight also sparked a national conversation about a profitable corporation’s responsibility to invest in decent-paying jobs.

Like the UPS strike, Verizon workers had the opportunity to shut down a well-known company that could not move offshore. Hiring scabs to maintain the complex copper line system would have been impractical. And with national anger raging about a federal debt-limit deal that puts more burdens on the poor and workers for the sake of the rich, a campaign against corporate greed could have easily gained sympathy, particularly when the five top executives at Verizon raked in $258 million over the last four years.

The unions also had a choke point with the upcoming release of the iPhone 5. Had the strike gone on, picketers outside Verizon Wireless stores could have urged potential customers to patronize AT&T. Just as the Teamster strike cost UPS tens of millions of dollars a day, forcing it back to the table, a campaign to deny Verizon iPhone customers could have taken a bite out of its profits. In April, Verizon reported that iPhone sales helped it triple its first-quarter profits to $1.44 billion compared to 2010.

In reality, according to CWA insiders, strike planning was a maladroit affair, brought on more by rank-and-file anger than strategic organizing. Also, strikers said the unions limited their demands to the prior contract. The unions failed as well to outline a strategy for organizing the 135,000 non-unionized Verizon workers, overwhelmingly in the wireless division. Over the last decade, union density at Verizon and its subsidiaries has dropped from 70 percent to 30 percent. After a strike in 2000, CWA won contract language allowing it to sign up wireless workers without company interference, a stipulation Verizon systematically undermined. This time, CWA spokeswoman Candice Johnson said, “We’ve been hearing from thousands of wireless workers who are interested in joining the union. We have some capability of doing that.”

But Daniel Gross, executive director of Brandworkers International and a former Industrial Workers of the World organizer, is skeptical of this possibility.
“It’s a tremendous failure of the labor movement to leave retail, for example, as a largely uncharted territory,” he said. “Where are the resources being deployed to get these folks organized, instead of the tens of millions of dollars pumped into the Democratic Party?”

He also downplayed claims that CWA strikers caught the attention of wireless workers wanting to join a union. As Gross pointed out, having union members outside the store while the non-union worker is inside with the manager reinforces the image of the union as a third party. “Workers end up seeing the union as something they don’t control,” he said.

With the unions and Verizon back in negotiations, it’s uncertain if the strike will result in a better contract. Even if the unions beat back the major concessions, it won’t add to the current national discussion about class, wages and unions. Nor would it bring hope to non-union workers at Verizon or anywhere else for that matter.
Other corporations might conclude that they can simply wait for the workers to come back and say, “We want to talk.” Gary Chaison, a professor of industrial relations at Clark University, asks, “Does that dull the effectiveness of the use of the strike weapon?”

When labor needs that tool the most, the answer is yes.