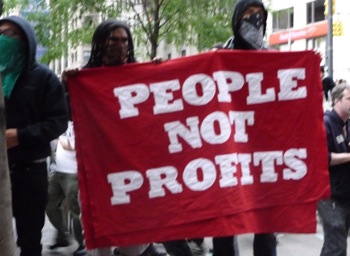 Surrounded by the headquarters of some of the world’s most powerful financial players, over two thousand protesters converged on Wall Street this Saturday. By the end of the second day, those occupying Liberty Park, formerly known as Zuccotti Park on Broadway and Liberty St.,  had settled in, partially helped by pizza, hot chocolate and blankets paid for and delivered by their supporters in New York City and across the country.

The Wall Street occupation began on Sept. 17 after months of planning and encouragement by Adbusters, who originally called for the occupation in response to a corporate-controlled political system that is no longer serving the needs of the majority of its people. They were soon joined by the hacktivist organization Anonymous in calling for a general people’s assembly. While the meetings leading up to the protest focused on dozens of smaller goals, Saturday morning, in the dozen or so people’s assemblies that broke down in Zuccotti Park now renamed Liberty Square, the protesters identified their key goals as liberating America from the death-grip of finance and creating a sustainable, just future for every member of the country. Specifics ranged from a progressive tax system, ending the wars and creating universal healthcare to more localized solutions like supporting and participating in a variety of worker owned cooperatives.

The protest began around noon in Bowling Green Park with approximately 3,000 people filing in from various ad hoc rallies across the Financial District — including a crowd that swarmed around the Wall Street Bull earlier in the day. The crowd then began marching towards 1 Chase Manhattan Plaza. While the group’s original goal had been to occupy the sidewalk in front of the building, the area was cordoned off and surrounded by more than 40 police cars and 80 police officers. Instead, the crowd, which had decreased to less than 2,000 by 3 p.m., marched to Zuccotti Park on the Corner of Liberty St. and Broadway.

The general assemblies, who began their meetings in circles, sitting on the concrete, broke down discussions into three general areas — problems, solutions and strategies. Most discussions began with an open session for assembly participants to vocalize what they viewed as the biggest challenges the country faces in freeing itself from the power of finance. While much discussion focused on the corruption and collusion between Wall Street and Washington, many assembly members  also noted that general apathy was also a problem of education.

The second part of the general assemblies focused on developing general solutions for the problems just identified. Regulation, transparency and again education became the hot talking points for this session. By the third session, assemblies were working on exchanging strategies for local, national and international action.

And in fact, those occupying Wall Street were not alone. News flooded in throughout the weekend of sister-rallies across the United States, including Seattle, San Francisco and Los Angeles. The international presence was heavy at the rally itself. Not only had protesters driven in from across the country, but activists we spoke to also arrived from as far as Mexico and Tunisia.

“This is my first protest, my first movement,” explained Kyle from Buffalo, New York, donning the Guy Fawkes mask symbolic of the Anon hacktivist collective. “A system that’s only focuses on rewarding greed should be challenged,” he said on Saturday, echoing the feelings of many protesters at the occupation who confessed the enormity of the problem requires an equally enormous series of solutions.

The open mic on the North side of the park gave air to many of the ideas. Sidney, a 50-year-old office worker from Connecticut, grabbed the microphone on Saturday and demanded an end to what he described as a “permanent tax holiday for the banks.”

While Saturday saw the most activity in terms of rallies, assemblies and marches, Sunday became a day of support for the occupation. Thousands of New Yorkers stopped in to either see or support the growing city of sleeping bags, signs and popular assemblies. The highlight of the day was when over $2,000 in pizza was ordered in less than an hour by supporters from around the world for the protesters in Zuccotti Plaza. By the second evening, the call went out for blankets as temperatures dipped into the 50’s.

By Monday afternoon reports of police interference were growing, as officers began arresting people who were using chalk to write goals and slogans on the concrete they occupied. But even with a heavy police presence, which included over 200 officers in the immediate area by Monday afternoon, protesters remained unmoved in their demands for a fairer political system. @Anon_support, a leading Twitter organizer of the event, even began organizing after-work parties in the vicinity to draw out more supporters from the New York City area.