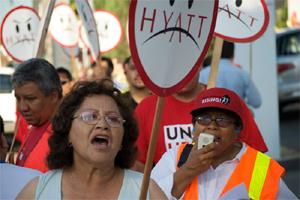 Hotel workers escalated their efforts to move hotel giant Hyatt at the bargaining table, striking hotels in four cities Thursday and promising to stay out for a week.

Many of the 3,000 striking workers have been without a contract for two years.

At the Hyatt Andaz in West Hollywood, the 24/7 picket was serenaded by a mariachi band Sunday night. The hotel has hired some scabs, who cross the line with fabric over the back windows of their cars to hide their identities, according to picketers.

Guests are complaining of lousy service and workers from other area hotels not on strike are joining the lines.

The union, UNITE HERE, is also asking customers to boycott 17 Hyatt-owned properties and says the company has lost about $20 million in revenue as a result.

The strikers, in six hotels in Los Angeles, San Francisco, Chicago, and Honolulu, are trying to limit Hyatt’s contracting out and improve its abysmal safety record.

They also seek a contract provision which would allow workers to strike, boycott, or picket in support of Hyatt workers anywhere in the country.

The provision is necessary because Hyatt “has singled itself out as the most abusive hotel chain,” said UNITE HERE spokesperson Leigh Shelton in Los Angeles.

The chain is notorious for firing 100 non-union housekeepers in Boston and replacing them with contract workers in 2009. “They gave them a trash bag and told them to get their things and get out,” said San Francisco housekeeper Laura Barrera, who works at a Marriott. “Then they subcontracted other workers in order to not give them benefits and pay them minimum wage.”

Barrera said the fight to recover the Boston workers’ jobs is her fight.

“Hyatt really shows a lack of concern for employee safety,” said Cathy Youngblood, a housekeeper at Hyatt Andaz, where 100 workers walked out at 5 a.m. Thursday.

The intense workloads lead to injuries, she said. “Management pushes you to the brink of crying, depression, every other thing you can think of.”

Even cleaning 14 or 15 rooms a day causes injuries.

“When you go into the room, once you close that door, you are running, not walking, to get the room finished,” Youngblood said. “The pain never stops.”

In California, hotel workers have been trying to pass a law requiring hotels to use fitted sheets, because tucking in flat sheets under heavy mattresses dozens of times a day causes arm, back, and shoulder injuries. In one recent survey of 600 hotel housekeepers, 91 percent reported work-related pain.

They also want the law to require hotels to provide long-handled mops, so housekeepers don’t have to clean bathroom floors on their hands and knees, another source of injuries.

“I have had two knee surgeries to repair worn-down kneecaps from scrubbing bathroom floors,” Gloria Pena, a retired housekeeper, told a California legislative committee in August.

The union is optimistic about the proposed law, though Governor Jerry Brown vetoed another labor bill this year, which would have given farmworkers the right to choose a union off the farms and away from the boss’s intimidation.

While other major chains have settled contracts in the last year, Hyatt is holding out. Its contracts in Chicago, Los Angeles, and San Francisco all expired in 2009, and Honolulu’s ran out 14 months ago.

Marguerita Ramos, who has worked for 11 years at Hyatt Century 21 in Los Angeles, said these negotiations are the hardest she’s seen. “They don’t want to move and we’re not going to move either,” she said through a translator.

Ramos said in the last talks, management compared the housekeepers at her hotel to workers at the non-union Hyatt Long Beach, saying, “They clean 30 rooms a day and pay for all their health care. Why can’t you?”

The union is fighting to end management interference at the Long Beach facility. “This is really important for our sisters,” Ramos said.