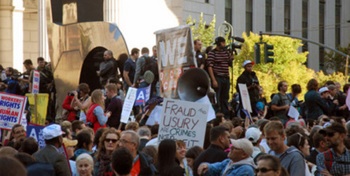 Recent US public opinion polls on the Occupy Wall Street (OWS) protests suggest a high level of public sympathy for the movement. Despite all the press depictions of the protesters as a bunch of grungy white kids who are “clamoring for nothing in particular,” the general public in this country is broadly sympathetic to the OWS movement. Given the atmosphere of public opinion, movement organizers have a tremendous opportunity to mobilize vast numbers of people in the coming months.

Four polls that touched on OWS, from Ipsos, Pew, NBC/Wall Street Journal, and TIME magazine, were all conducted between October 6th and October 10th. The first significant finding is that the OWS movement has caught public attention. Barely three weeks into the protests, according to Ipsos, 82 percent of the country had “at least heard of” the movement, and 50 percent considered themselves “very” or “somewhat” familiar with it. The Pew poll found that 42 percent are following the movement “very closely” or “fairly closely.”

How large a portion of the US public supports the Occupy Wall Street movement? In the TIME poll, 54 percent of respondents had a “very favorable” (25 percent) or “somewhat favorable” (29 percent) view of the movement. Only 23 percent had an “unfavorable” view of the movement, while another 23 percent said they “don’t know enough” yet. This finding means that roughly 167 million people in this country view the OWS movement favorably. If even 1 or 2 percent of these people were to become active participants, it would make for a movement bigger than anything seen in this country since the 1960s, and probably since the 1930s.

The Ipsos and NBC/WSJ polls also offer hopeful indications of public support for Occupy Wall Street. According to the Ipsos results, 38 percent have a “favorable” view of OWS, while 35 percent are still “undecided”; only 24 percent have an “unfavorable” view. The NBC/WSJ poll found that 37 percent “tend to support” the protests, while only 18 percent “tend to oppose” them. Though significantly lower than the 54 percent in the TIME poll, 37-38 percent of the population still translates to at least 114 million people. The Pew poll sought only to measure public interest and did not ask for respondents’ evaluation of the movement.

As all public opinion analysts emphasize, the phrasing of poll questions is crucial. The Ipsos and NBC/WSJ polls are arguably less reliable measures of public sentiment than the TIME poll, for two reasons. First, the Ipsos question about OWS did not provide respondents with any sense of the movement’s purpose, thus arguably reinforcing the corporate media mantra that OWS has no purpose. In contrast, the TIME poll question actually presented respondents with basic information about OWS’s message, noting that the protesters were against “policies which they say favor the rich, the government’s bank bailout, and the influence of money in our political system.” This wording was reasonably honest, though not overly generous to the protesters since it cast the notion of pro-rich policies as a claim of the movement rather than an objective reality. The NBC/WSJ poll question gave a shorter description of the protests’ message. But there the results may have been influenced by the pool of respondents, which was disproportionately white (77 percent of respondents, versus 72 percent in the US population).

It’s worth noting that the limited media coverage of these polls, as well as the pollsters’ summaries of the results, have been quite misleading. The summary of the Pew poll was entitled “Wall Street Protests Receive Limited Attention,” and the authors emphasized that only 17 percent of respondents said they were following OWS “very closely.” One has to go to page 11 of the report to find that an additional 25 percent said they were following the movement “fairly closely”—meaning that a large chunk (42 percent) of the public is already paying attention. A Washington Post blog post seized upon the Ipsos and Pew results to argue that Occupy Wall Street is “overblown,” pointing out that public interest in OWS seems lower than interest in the Tea Party at a comparable stage in its development in 2009. But the story likewise failed to report both the higher figure of 42 percent or to contextualize the results in any meaningful way. One important bit of context is the barrage of negative press coverage the protests have received, in stark contrast to the flood of favorable coverage of the Tea Party; considered in this light, all four polls indicate a surprisingly high level of public support for OWS, and are a testament to average people’s ability to think independently. In the hands of media pundits and elite-friendly pollsters, poll results indicating broad-based sympathy for the OWS movement are somehow transformed into evidence of public apathy and/or antipathy toward it. But a closer look at the actual poll results and the phrasing of the questions gives a much different impression.

Dozens of polls, including the most recent ones, make it very clear that there is widespread popular anger at Wall Street, corporations, and the lack of political democracy in this country (and over other things, but these issues draw particular outrage). The TIME poll cited above provides the most recent data available. Of those respondents who considered themselves familiar with the OWS protests,

· 68 percent think that “the rich should pay more taxes,” and 73 percent of all respondents favor raising taxes on millionaires

The poll also found an extremely high level of cynicism regarding US politics: 60 percent say “that the political debate in Washington and the media do not represent” their communities’ concerns, while only 4 percent are “feeling positive about the state of the country today.” Respondents have a strong dislike for both major parties, and hate the Democrats only marginally less than they hate the Republicans. This despair was one factor that enabled the Tea Party to garner significant public sympathy in 2009-10. But in the past year or so there seems to have been a rather precipitous decline in sympathy and support for the Tea Party as people have come to see through its populist, “outsider” façade. While an August 2010 poll found that 52 percent “feel sympathy” for the Tea Party, the recent TIME poll found that only 27 percent have a “favorable” view of it, and only 6 percent consider themselves “member[s] or follower[s].”

These latest findings are consistent with previous polls, which place the public far to the left of all Congressional Republicans and most Democrats on most major issues. The public is fiercely distrustful of corporate power and thinks that workers should have far more income, workplace protections, and political influence than they do. Strong majorities believe that the government has a responsibility to ensure that everyone has access to food, education, and health care. On tax and spending issues, polls have repeatedly confirmed that majorities favor large cuts to the military budget, higher taxes on the wealthy, and government stimulus spending to create jobs; this trend holds true for polls from the last two months. Yet public disgust with the unrepresentative nature of US politics and what Edward Herman and David Peterson call “the unelected dictatorship of money” is sky-high. One 2010 poll from the Program on International Policy Attitudes found that an astounding 81 percent of the US public thinks that their country “is pretty much run by a few big interests.”

The OWS movement bursts upon the scene at a time of widespread anti-elite and anti-authoritarian sentiment, coupled with overwhelming despair at the state of the US political system and the endless false promises of politicians. Given this atmosphere, the movement has tremendous potential, particularly in two key areas: it can further educate the public about the various injustices of which Wall Street is symbolic—from capitalism to war, racism, and patriarchy—and it can inspire average people to believe that real alternatives are possible, not by voting but through a mass-based and independent progressive movement.

One of the central tasks of social movements is education, of both their members and the general public. Grassroots organizations are largely what sociologist Michael Schwartz calls “ignorance-reducing devices.” At their best, they can illuminate causes and effects in society and promote the kind of critical inquiry necessary for people to develop a more robust and coherent understanding of oppression and how to confront it. They can also help shift public opinion by dramatically exposing the nature of injustice and forcing the general public to psychologically confront oppressive realities. They can change the minds of people who are not directly affected by a given form of oppression, as in the case of white attitudes about black civil rights. As Benjamin Page and Robert Shapiro note in their 1992 book The Rational Public, the Civil Rights movement contributed to a monumental change in public opinion over time: “Changes in attitudes of whites about school segregation are particularly striking. The mere 31% that favored black and white children going to the same schools in 1942 grew to 50% in 1956, 66% in 1963, 71% in 1965, 76% in 1970, an overwhelming 88% in 1980, and 93% in 1985.” In recent years there has been a somewhat comparable shift in the public’s views on gay rights, both in the United States and around the world. If the OWS movement can continue to build momentum and get its message out, it may have a similar effect on the large portion of the “undecided” onlookers among the public, who may start to come around as a result.

But perhaps more important in the case of OWS is the power of social movements to convince onlookers that something different is truly possible, and that their actions can contribute to social change. For the tens of millions of people who are already painfully aware of the injustice and oppression for which Wall Street stands, the most powerful effect of the OWS movement could be to inspire them to believe in their own ability to contribute toward the construction of alternatives. Given the widespread despair and cynicism of recent decades, OWS is certainly fighting an uphill battle in this regard; even if the public views the movement favorably, 56 percent still think that it will “have little impact on American politics,” according to the TIME poll. On the other hand, 30 percent already say it will have a “positive impact,” and many people who have never engaged in political activism before have already been inspired to join the movement. It’s not unrealistic to expect that hundreds of thousands or millions more could follow. The current movement is all the more meaningful in that there is such strong resistance to being coopted by the Democratic Party; relative to 2008, fewer and fewer people are willing to place their fate in the hands of progressive-sounding politicians, which is a very healthy development indeed.

There are numerous challenges ahead for the OWS movement, as there are for any movement representing the oppressed and disenfranchised. For one, people’s belief that alternatives are possible will only last if the movement is able to visibly alter the political landscape and win small reforms along the way. But the poll results described above suggest that the occupiers have a crucial potential ally in the general public. The time is ripe for a mass movement.

Kevin Young is a member of the Organization for a Free Society, one of the groups helping to organize the Occupy Wall Street movement. For more info, see www.afreesociety.org.

This article was originally published by ZCommunications.org.