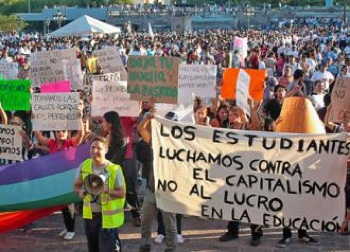 This is the first time since February 2003 and the massive demonstrations in the lead-up to the invasion of Iraq that a call for an international action on a specific date has met with such a response.

In Spain, where the Indignados (“the outraged”) movement began, almost 500,000 demonstrators marched through the streets of around 80 different cities, including 200,000 or more in Madrid, where I am writing from.

Actions have taken place on five continents. More than 80 countries and almost 1,000 different cities and have seen hundreds of thousands of youth and adults on the march, protesting against the management of the international economic crisis by governments rushing to bail out the private institutions responsible for the collapse, and who are taking advantage of it to strengthen neoliberal policies: massive layoffs in public services, slashing social spending, massive privatizations, and attacks on social programs, from public pension systems to unemployment benefits and beyond.

Everywhere, repayment of the public debt is the pretext used to strengthen austerity measures. Everywhere, demonstrators are accusing the banks.

In February 2003, we saw the broadest international mobilization to try to prevent a war: the invasion of Iraq. More than 10 million people gathered in countless demonstrations all over the planet. Since then, the dynamics of the global justice movement born in the 1990s has gradually faded, but never entirely died out.

On October 15, 2011, slightly fewer than one million people took to the streets. Nevertheless, it was a huge victory, because it was the first large demonstration carried out in a 24-hour period around the planet against the people responsible for the capitalist crisis, which has created tens of millions of victims.

The financial and economic crisis, which started in the U.S. in 2007, has spread above all in Europe since 2008. The debt crisis faced by developing countries has moved to the North. It is interconnected with the food crisis, which has hit many developing regions since 2007-2008. And this isn’t to forget the climate crisis, which is above all affecting the peoples of the South.

The systemic crisis is also expressed at an institutional level: the leaders of the Group of 8 member countries know they do not have the means to manage the international crisis. Thus, they have convened the Group of 20. For three years now, the latter has proven incapable of coming up with valid solutions.

This crisis also involves a crisis of civilization. The movement raises challenges to consumerism, generalized commoditization, the failure to take the environmental impacts of economic activities into account, productivism, the search to satisfy private interests at the expense of the public interest, the major powers’ systematic recourse to violence and the denial of the basic human rights of peoples such as the Palestinians. Often, capitalism is the heart of what is being challenged.

No centralized organization had called this mobilization. The Indignados movement was born in Spain in May 2011 in the wake of the Tunisian and Egyptian rebellions in the previous months. It spread to Greece in June 2011 and to other European countries. It has crossed the North Atlantic since September 2011.

Of course, a series of radical political organizations and organized social movements support the movement, but are not leading it. Their influence is limited. It is a broadly spontaneous movement, mostly made up of young people, with an enormous potential to develop that is very disturbing to political leaders, the heads of major corporations and all police forces on the planet. It could die out as a flash in the pan or be the spark that sets off the fire. Nobody knows.

On October 15, 2011, the call to mobilize mostly rallied demonstrators in cities and towns in countries of the North, including the planet’s financial centers, which is very promising. The outraged “Occupy” movements have sparked very creative and emancipatory dynamics.

If you are not yet involved, try to join or launch it if it does not yet exist where you live. Link up and take part in an authentic emancipation.