As we’ve discussed on several occasions before on this site (here, here and here), managing the appearance or attire of those participating in nonviolent action is an important strategic consideration that is too often overlooked. Some movements are thankfully catching on.

At the Tar Sands Action, which I participated in back in August, the organizers wisely called on those planning on risking arrest to come “dressed as if for a business meeting,” because as they explained “this is, in fact, serious business.”

Now, in an effort to counter depictions in the mainstream media of those occupying Wall Street as dirty hippies, a group called Suits for Wall Street—with the tagline “Subversive Business Outfits as Tactical Camouflage”—is raising money to provide suits for the 99 percent. (They are also accepting used suits, which they’ll personally deliver to occupiers.) On their IndieGoGo page, which has already raised far more than their initial goal (but could still use your support), they explain:

We all look great in suits. To reporters, to workers, to skeptical tourists, we’ll look like people to listen to, or, at the very least, to hear out. Lazy journalists won’t be able to easily dismiss us and will have to actually listen to what we say. The conversation will grow out of the echo chamber and into the wider world — where it belongs.

Suits are camouflage in the warrens of Wall Street. And there are other advantages.

Want to walk past a police barricade? Put on a suit.

On October 15, our crack team of well dressed artists, designers, and wardrobers will deliver racks and racks of business attire, free of charge to anyone at Liberty Square. We’ll be joined by progressive tailors, radical barbers, and folks who want everyone to look great.

The way you say it matters as much as what you say. So say it in style. Say it in a suit.

Bravo! Check out their great promo video above if you haven’t already.

This article was originally published on WagingNonViolence.org 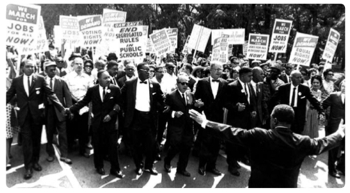