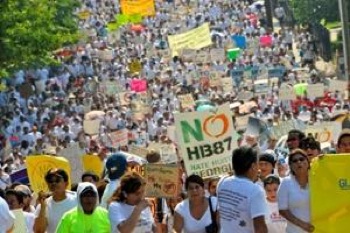 Immigrant rights advocates say Alabama’s law is the harshest. It gives police the right to stop and investigate anyone they “reasonably suspect” of being undocumented—in other words, an open invitation to racially profile.

The legislation also denies immigrants state medical aid and unemployment benefits. It forbids individuals and employers to hire, harbor, rent property to, or even give a ride to undocumented immigrants. Public schools must check the immigration status of children when they enroll.

One town, Allgood, announced that all water customers must have a state picture ID on file or “you may lose water service.”

Most of Alabama’s law, and the other states’ laws, are on hold pending Department of Justice challenges. The government has argued that these state laws are unconstitutional because immigration is a federal matter.

The anti-immigrant laws come as federal initiatives have driven deportations to an all-time high. A partnership between local law enforcement agencies and the federal immigration service (ICE), known as Secure Communities, has led to the deportation of a record 400,000 undocumented immigrants in 2011. They can be deported for any crime, no matter how small or nonviolent.

Dulce Guerrero, a DREAM activist and 18-year-old high school graduate from Mableton, Georgia, said three of her uncles have been deported after being stopped “for things like speeding and broken tail lights.”

Legislators’ strategy is to make conditions so unbearable for immigrant workers that they flee the country. But cruelty hasn’t led to out-migration. For many reasons, including a dangerously militarized border, the undocumented population has stayed in the U.S.—even as workers have fled to more welcoming states.

Workers, students, and small business owners in Alabama gave lawmakers a taste of what society would look like without them.

They led a “Day Without Immigrants” action October 12 that involved student walkouts and wildcat strikes, shuttering at least 40 businesses and slowing operations in half a dozen poultry plants.

More than 2,000 mostly undocumented workers shut down the processing lines and butchering room floors in Albertville, in the state’s northeast corner.

Although a majority of the poultry plant workers are Latinos, a few white and Black workers also came off the line for the day in a show of solidarity with immigrant workers, said José Contreras, a Dominican immigrant. He’s the owner of a small grocery store and restaurant in Albertville who shut down his business for the day.

Rick Major, secretary-treasurer of Food and Commercial Workers Local 1995, said “We had many members calling in to work and saying that they needed to pick up their children at school because of fears associated with the law.”

Major said the climate of fear is pervasive. Children are bullying Latino students, telling them, “They are going to come for your mom and deport her.”

School districts are reporting a sudden exodus of children, pulled from school by their parents, who fear retaliation or immigration agents coming to their front steps.

But the union didn’t back the October 12 strike.

“We could not support the wildcat action because our members have a no-strike clause in their contract,” Major said. “As the union, our concerns are upholding and enforcing the contract between the workers and the employer.”

Some unionists in the state were supportive. “Immigrants in Alabama are rightfully scared, and the whole time the boss is enjoying the benefits of a divided workforce that’s working under the fear of deportation,” said Mark Bass, president of Longshore (ILA) Local 1410 in Mobile.

Contreras said that 40 business owners, including auto repair shop mechanics, car dealers, and restaurant owners all shut down in solidarity.

“Our goal was to illustrate the economic and social contributions of immigrant workers,” he said.

Elia Ortega Arista, a DJ at the Spanish-language radio station Doble X in Albertville, said a shutdown instead of a march was chosen because “community members are being terrorized and are understandably afraid of any confrontation with local authorities.”

Conversations at the grocery store, on Facebook, and on local radio stations helped organize the statewide shutdowns and walkouts.

Direct action is not new to Albertville. Five thousand supporters of immigration reform mobilized in 2006 for a mass strike, part of immigrant rights protests and walkouts nationwide.

“We asked that supporters do zero business and buy nothing,” Contreras said. “After seeing the economic devastation left behind in states like Arizona and Georgia, we thought it would be a useful illustration of what’s to come if Alabama lawmakers continue on this dangerous and self-destructive path.”

ROTTING IN THE FIELDS

Farmworkers, their families, and tax dollars have fled harshly anti-immigrant states like Arizona and Georgia in search of friendlier states, so farm owners have turned to probationers and prisoners on work-release programs to fill the void.

But those workers have been unable to keep up with the requirements of these backbreaking jobs, many quitting after just hours in the sun and leaving farm owners to watch their crops rot in the fields.

In the process, they dispel the myth that immigrants are “stealing our jobs,” confirming that citizens are simply not interested in such exhausting and low-wage work.

Fox News Latino reported that on one Georgia cucumber farm, some Mexican and Guatemalan laborers were accustomed to filling 200 buckets before lunch, bucking for incentive pay. The fastest probationer filled only 134 buckets in a day.

Other immigrant workers are not as visible but equally important to performing the services middle-class Americans depend on.

They include the women workers who work inside their bosses’ homes. Domestic workers clean the houses, fold the clothes, prepare the meals, and take care of children and the elderly, for low wages and with no legal protections against wage theft or forced overtime, sometimes facing sexual harassment or worse.

They share with other immigrants the attack on their communities by politicians looking to make a name for themselves.

A diverse group from two dozen human rights organizations around the country—calling itself the We Belong Together Delegation—visited Georgia in September to document the impact of that state’s anti-immigrant law.

Women told of being afraid to report sexual harassment or wage theft to authorities for fear of being deported. They described choosing to stay with an abusive partner rather than report domestic violence and risk deportation and separation from their children. Many go without basic health care for fear of coming into view of law enforcement.

“It’s important that we highlight the issues which uniquely affect women and children,” said Linda Burnham with the National Domestic Workers Alliance.

As immigrants wage the uphill battle to reclaim the most basic of human rights, they too are among the 99 percent.

This article was originally published by LaborNotes.