Dec. 17, 2010 A produce vendor and his family’s breadwinner since childhood, 26-year-old Mohammed Bouazizi sets himself on fire after years of petty police harassment in Sidi Bouzid, Tunisia. His act sets off a wave of protests for democracy and opposing corruption against the autocratic regime of President Zine el-Abidine Ben Ali.

Jan. 14, 2011 After 23 years in power, Ben Ali is forced to dissolve parliament and then flees to Saudi Arabia. The success of the uprising inspires pro-democracy activists in other countries to confront their autocratic rulers in what becomes known as the Arab Spring. In Tunisia, the main square in the capital of Tunis, which was the site of massive protests against Ben Ali, is renamed after Bouazizi.

Jan. 25, 2011 Using everything from canvassing and flyering to social networking and citizen-made media, organizers begin an 18-day non-stop protest in Cairo’s Tahrir Square. By the third day violence by the regime’s thugs and the blocking of internet traffic inspire hundreds of thousands of Egyptians to join protests and swing world opinion against President Hosni Mubarak’s dictatorial government. 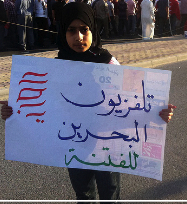 Jan. 27, 2011 More than 16,000 protesters flood into the public squares of Sanaa, Yemen to demand an end to the rule of Ali Abdullah Saleh, who has ruled over Yemen almost uninterrupted since 1978. Pro-democracy demonstrators set up camp in University Square, renaming it At-Taghir (Change Square), which eventually turns into a battlefield for pro- and anti-government protesters.

Feb. 11, 2011 After three decades in power Hosni Mubarak resigns. Less than six months later he is shown to the world clad in prison garb, lying on a hospital bed in a cage on trial for corruption and unlawful killings.

Feb. 14, 2011 Internet-savvy activists organize rallies across Bahrain demanding equal rights for the oppressed Shia majority and an end to government corruption. Tens of thousands turn out in the capital of Manama alone, rallying in Pearl Circle. The same day protests begin government forces attack, killing seven protesters in a few days. At one point more than 200,000 join in demonstrations, more than one-third of the country’s population.

Feb. 15, 2011 Thousands of Wisconsinites set up a protest encampment inside the state capitol in Madison to protest Republican Gov. Scott Walker’s austerity budget and his attack on collective bargaining. The state capitol occupation lasts for almost three weeks and ignites pro-union demonstrations of upwards of 100,000 people. 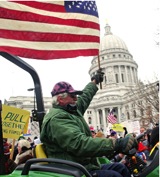 March 13, 2011 As Bahraini groups expand their calls for equality into calls for general democracy, the royal family endorses an invasion of military forces from Saudi Arabia and neighboring countries to crush the pro-democracy uprising. Dozens of protesters are killed or disappeared, while many prominent organizers are jailed and tortured.

March 30, 2011 Hundreds of protesters from several New York City-based community organizations occupy the state capitol through the night as legislators work behind closely guarded doors to approve an austerity budget that enacts billions of dollars in spending cuts while allowing a millionaire’s tax to expire. 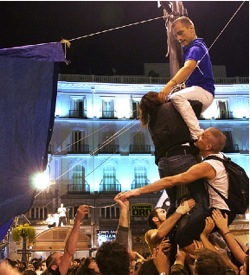 <–May 15, 2011 Over 1,000 youth, dubbed los indignados (the indignant), begin an encampment in Puerta del Sol, Madrid’s central square. Another 30,000 supporters gather in the square for a series of mass assemblies that put forward popular demands that include a greater say in the political process and an end to the austerity measures enacted by the Spanish government.

June 14, 2011 Dozens of anti-austerity protesters begin a three-week around-the-clock protest near New York City’s City Hall Park, renaming it Bloombergville. Their demands include an end to the severe cuts to public services at the city and state level.

Sept. 17, 2011 After a call from the Canadian magazine AdBusters and web activists Anonymous for an occupation of Wall Street in protest of corporate influence in the political process, nearly 2,000 people rally. They march from Bowling Green and set up camp in Zuccotti Park, just north of the New York Stock Exchange, renaming it Liberty Plaza. On the same day in Poland’s capital, an estimated crowd of more than 20,000 people protests a conference of European Union finance ministers reportedly called to plan austerity measures for the Euro Zone.

Oct. 6, 2011 Thousands plan to occupy Washington, D.C.’s Freedom Plaza demanding that after 10 years of war U.S. military forces be withdrawn from Afghanistan. Organizers demand that hundreds of billions slated for the ongoing war be diverted to “human needs and environmental protection.”