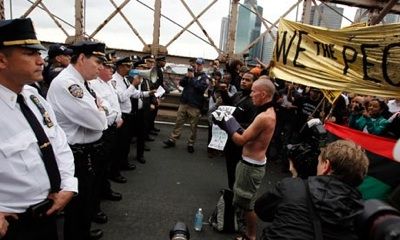 Occupy Wall Street (OWS) is not the only group using YouTube as part of its messaging campaign to win public support. The New York Police Department’s (NYPD) arrest of 700 OWS protesters on the Brooklyn Bridge on Saturday Oct. 1 was nothing but a public relations stunt to sway the people to their side. One NYPD official even admitted it was ”a planned move on the protesters.”

“Come﻿ into my parlor,” said the spider to the fly.

The NYPD claims they warned marchers of the consequences of blocking traffic on the bridge and released footage on YouTube to prove it. The video shows that an officer ordered people to leave the roadway if they did not wish to be arrested. The problem is that it is unlikely that even seven protesters heard him, much less the 700 they arrested. This was by design. The NYPD has access to huge loudspeakers, helicopters, and a variety of sound gear, so there is no excuse, especially considering the fact that protesters are not allowed to have such equipment and must rely on their voices alone to communicate.

This was entrapment, plain and simple. In legal terms, entrapment is when a law enforcement officer lures someone to commit a crime they were not previously willing to commit. Given that footage subsequent to the nearly inaudible NYPD warning shows officers practically leading the march onto the bridge’s roadway, it is no wonder so many decided to exercise their First Amendment right on a busy roadway.

If the NYPD was truly concerned about keeping the road open for vehicles, they would have formed a phalanx at the foot of the bridge. Instead, they waited until the march took over both lanes of traffic and made it to the middle of the bridge before they confronted the activists with a formation blocking their path.

The NYPD also released a video in which the same officer who made the nearly inaudible warning at the foot of the bridge proclaimed in the middle of the bridge that everyone who “refused” to leave the bridge’s roadway would be arrested. An NYPD spokesman later claimed, “this was not a trap.”

This is a lie, and a stupid one at that.

Footage taken from the middle of the bridge shows that vans and officers followed behind the protesters, trapping them between two walls of blue and white shirts. If it was not a trap, why did middle- and retirement-aged people begin frantically climbing up the metal beams towards the pedestrian walkway 5-10 feet to the pedestrian walkway above when they realized they were surrounded? People in that age bracket with families and jobs do not take up new hobbies like climbing without safety gear in the middle of a peaceful protest, even in the most severe and unexpected cases of mid-life crises. Someone could have fallen and gotten seriously injured, or worse.

If anyone is guilty of disorderly conduct, it is the NYPD.

Predictably, The New York Times believed and spread the NYPD’s stupid lies about the incident when they replaced their initial story that said the police allowed the marchers onto the bridge before arresting them with a second story that let the cops off the hook and placed the blame on the protesters within an hour. Is it wonder that the intellectually savvy and inscrutably honest President George W. Bush was able to get the The New York Times to scream about Iraq’s imaginary weapons of mass destruction for almost two years starting in fall of 2002? Maybe they should learn the “fool me once” saying Bush famously mangled.

That the NYPD would resort to entrapment is undoubtedly a shock for millions in this city and around the world. For the city’s Muslim community, it is old news. Their constitutional rights have been systematically violated by city, state, and federal law enforcement authorities since Sept. 11, 2001.

Those rights are still in their crosshairs, but this time the group they are going after is the 99%.

The only thing more disturbing than the NYPD’s cunning and outrageous tactics is the fact that JPMorgan Chase gave the NYPD’s nonprofit a $4.6 million donation a few days before the latest arrests. That’s way more than the $800,000 JPMorgan Chase employees gave to Barack Obama in the 2008 election cycle. This donation was also tax deductible. Was the $1.4 billion tax refund JPMorgan Chase was eligible for in 2010 just not enough?

Another difference: this was an institutional donation, not a series of donations by individual JPMorgan Chase employees. This is CEO Jamie Dimon’s way of saying thanks to the NYPD for services rendered. It seems the NYPD has sworn to serve and protect everyone but the 99%, even though Mayor Bloomberg tried to cut their pensions and pit them against the local teachers union during negotiations over their last contract.

The good news? The OWS spark is kindling flames all over: 3,000 people marched on Bank of America in Boston over the weekend, an OWS-style march is being planned in Toronto, Canada, and there is even an Occupy Nashville, Tennessee action being organized. When Nashville rises up against Wall Street, we have gotten way beyond the point where pepper spray and entrapment will work to crush dissent.

Pham Binh’s articles have been published by AsiaTimes Online, Znet, Counterpunch, and The Indypendent. His other writings can be found at planetanarchy.net.