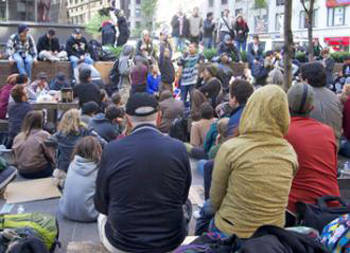 The occupy movement that is spreading across the country is shaking the narrow confines of politics as usual in the U.S.–and creating new possibilities for social struggle.

People who have lost their jobs or their homes, who are tens or hundreds of thousands of dollars in debt, who are tired of watching the bankers get rescued from a crisis of their own making while austerity measures are imposed on those who bailed them out–many of them see in the Occupy movement a way to speak out about their grievances.

The protest movement is also attracting people who don’t just want to reform capitalism, but replace it with a system that serves human need, not profits. This has given rise to discussions, questions and debates about how to build a revolutionary movement in the U.S.

Among the smaller core of activists who play a role in the day-to-day activities of Occupy Wall Street, including its encampment in the renamed Liberty Plaza and the daily General Assemblies, the single strongest viewpoint on this question is probably that a revolutionary movement must create “autonomous” spaces or communities that “prefigure” a post-capitalist society–that is, create a model of the future in the present.

For the “prefigurationists,” as I’ll call them here, raising demands for specific reforms in the present–like taxing Wall Street, regulating corporate power or defending the right of workers to form unions–discourages the development of revolutionary struggle. Instead, goes the argument, such demands legitimize the existing power structure by recognizing its authority. Instead of articulating demands, activists should ignore the political process and focus instead on creating the alternative to it in the here and now.

I believe the prefigurationists’ strategy is wrong on several counts. First of all, it underestimates the importance that reforms like those listed above would have in people’s lives. The prefigurationists also base their ideas on several false assumptions–about how revolutionary movements have developed in the past and about the ability of any individual or group to remain “autonomous” from the state and the economy.

If followed to its conclusions, their strategy risks limiting the movement’s potential to grow and reach the widest possible audience.

AS FOR the idea that demands retard the struggle for change, even a quick look at the history of actual revolutions shows this isn’t true–in fact, the opposite is the case. Clearly articulated demands are essential to drawing large numbers of people into struggle.

Take the most recent example. The Egyptian Revolution was fueled by a wide range of demands about change in the here and now, all of them interconnecting with the central one: “Mubarak must go.” Throughout the revolution, Egyptian workers demanded higher wages, job security, price controls, the removal of Mubarak cronies from positions of power, the disbanding of the secret police, and much more.

These demands showed that revolution aimed to make tangible gains, both on wider political issues and in ordinary people’s lives–and that helped draw more people to the cause.

But demands and the organizing to promote them also preceded the revolutionary upsurge. For years beforehand, activists organized around struggles for better wages and working conditions in important Egyptian workplaces like the textile mills in the industrial city of Mahalla el-Kubra.

Some organizations that played a leading role in the 2011 revolution had their origins in these labor struggles–the April 6 Youth Movement, for example. Moreover, the militant and mobilized Egyptian working class played a decisive role in the revolution itself, including the threat of a general strike that is credited with finally pushing Mubarak over the edge in February.

One could examine any revolution and see that demands have been central to building revolutionary struggle. Thus, there isn’t a contradiction between demanding reforms and building a revolutionary movement. In fact, the two things are intertwined.

One of the central problems with the “prefigurationist” strategy of not raising demands is that no link is made between the struggle to improve life under the existing system and the struggle to create a new society without exploitation and oppression.

Most people come to the movement around the first of these struggles. Because they are unable, for reason of families or jobs, to take days or weeks off to be part of an ongoing action that aims to prefigure a future society, they are first attracted to activities that affect their lives. To involve the vast majority of working people and the poor in the struggle, it’s essential to concretely make the link between the struggles of the present and the struggles for the future.

There is one way that I agree we should attempt to prefigure a future society: by creating a vibrant, creative, caring community that empowers those who have been the victims of racism, sexism, homophobia and all other forms of oppression. Such a community would be quite different from the way society is organized under capitalism and would be an inspiring example of cooperation and of overcoming the bigotries imposed by society. This in itself can do much to attract people to the movement, particularly those suffering from oppression.

But you don’t need to avoid raising demands to do this. We can be a model of cooperation and empowerment, and still both demand changes in the existing system and point the way toward the replacement of capitalism with socialism.

But to do that, we need to understand our relationship to the state and the system, and the prospects for change in the U.S. today.

ONE POINT central to the prefigurationists is the idea that they are creating an “autonomous” space apart from existing society.

This effort is not a new idea, although some of its supporters seem to think it is. Utopian socialists of the early 1800s attempted to do the same thing, creating autonomous communities that were supposed to be models of a new society to gradually spread and replace the old. There have been other attempts since then to do something similar.

These movements attempted to become seeds that would spread through society. But instead, they succeeded in cutting themselves off from the living movements in the society they attempted to leave behind. By and large, these communities couldn’t sustain themselves materially, and therefore either collapsed or were forced to reenter the capitalist economy.

Prefigurationists argue that they can create self-contained, self-governing societies as pockets of autonomy within the capitalist system. While the goal of creating a democratic decision-making process and remaining independent of the mainstream political system is necessary to create a movement that challenges the entrenched power of Wall Street and the corporate elite, the goal of constituting an autonomous authority within capitalism is impossible and can lead to some dangerous illusions.

An encampment or other self-created community can operate democratically and according to principles of solidarity, but it can’t truly control its own space or evade the authority of the state–as Occupy Wall Street’s repeated clashes with the NYPD have shown.

The idea that Occupy Wall Street or any other collective grouping can be “autonomous” is wrong and harmful to the movement. As in all serious social struggles, the movement will eventually have to confront the organized power of the state and its enforcers. There are strategies and tactics available to us for doing this, but to pretend that the state has no power over us is to fool ourselves. Ignoring the state isn’t a recipe for eliminating it. It merely creates confusion within our own camp.

To take Occupy Wall Street as an example, it produces none of the necessities it needs for its own survival. It’s dependent for all its needs on the society around it: donations of food, money and supplies; electricity from the power grid, produced mainly by burning hydrocarbons or nuclear power; an Internet connection and Wi-Fi, plus many computers (produced mainly in Chinese factories) to facilitate the movement’s communications system internally and with the outside world; and more. The same goes for other attempts to create autonomous spaces–none of them have ever been truly self-supporting.

This is not to say that Occupy Wall Street is guilty of something because it uses material resources available under capitalism. Rather, the point is that the attempt to be autonomous from capitalism can’t succeed.

We are all part of the capitalist system, whether we like it or not. We have a choice about whether to fight back against that system or accept it, but we don’t have a choice to live outside of it. To believe that we do is to delude ourselves, with damaging political consequences.

Finally, it’s important to be realistic about the prospects for change in the U.S. today. Anyone who thinks such a fundamental transformation is possible in the U.S. in the immediate future is both exaggerating the growing but still very small number of people committed to this kind of change–and underestimating the strength of the political, military, social and economic forces arrayed against our struggle.

For anyone who does want to see fundamental change in the U.S. and the world, the Occupy movement is a tremendously exciting development. It is a source of inspiration for growing numbers of people. But its real importance is not that a core of activists have “prefigured” the future society we’d like to see–but that its activities are linking together people and organizations which can bring the struggle to every corner of society.

This article was originally published in the SocialistWorker.org .