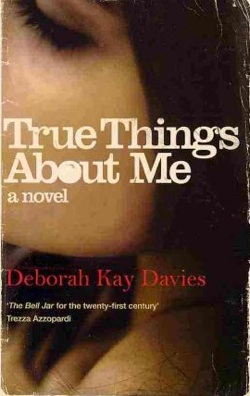 True Things About Me
By Deborah Kay Davies
Faber and Faber, 2011

How does a nice girl end up in an abusive relationship? This is the question Deborah Kay Davies explores in her riveting novel True Things About Me, an account of the unraveling of one such nameless “nice girl” from the girl’s own perspective. While we may not be any closer to a “why” by the story’s end, the frank and extensive description of “how” makes this the most riveting thing you’re likely to read this year.

The unnamed protagonist, who works in a social services office in an anonymous town in the U.K., leaves her job one evening to find herself, 10 minutes later, slammed up against a garage wall having sex with a stranger. Her ensuing entanglement with the man soon takes over her thoughts, her job and her entire life. The fact that the ostensible victim is the one telling the story makes it no more comprehensible — she often fails to understand her own motivations — and instead creates the lurid sensation that we’re reading a train wreck in progress.

Davies’ background in poetry and short stories is evident in the novel’s minimal and incisive prose. She expertly avoids embellishing her protagonist, whose increasingly outrageous acts bewilder and alienate her friends and family, as her understanding of her life is stripped down layer by layer until we’re not sure of what’s left.

This harrowing and psychologically complex story offers an invaluable insight into a world that — unfortunately — too many real women inhabit. In the vein of Emma Donoghue’s Room, which strives to make unimaginable abuse palpable, True Things About Me is an arresting first novel that marks its author as a voice to note