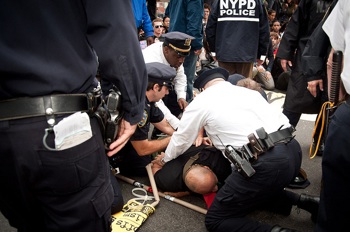 Nkrumah Tinsley, a 29-year-old black man from the Bronx, doesn’t necessarily have a problem with all cops. “Thank you for being professional,” he said to one officer as he politely asked us to move out of an area that was being kept clear.

But Tinsley has had more than a few unpleasant run-ins in his life. During an Occupy Wall Street (OWS) demonstration outside the Manhattan District Attorney’s office Oct. 18 to demand an inquest into NYPD brutality against protesters, Tinsley spoke to the crowd via the people’s mic about non-physical, but dangerous harassment.

One night at a bar in Greenwich Village, a drunken man admitted to Tinsley that he had murdered a man in order to join a gang, and told Tinsley roughly where the body was. Tinsley reported the tip to the police.

Weeks later, Tinsley was walking in a high-crime part of the Bronx and was stopped by officers and frisked, as they told him a shooting had taken place there. Tinsley gave them his name, knowing that the police would have him on record as being a source. He assumed this would win him favor with the officers. But when they let Tinsley go, one of the cops said as loudly as he could, “Bye CI!” A CI is a Confidential Informant, aka a snitch.

Tinsley was in fear. What if a murderer heard that and actually suspected him of being an informant?

“This is why people do not talk to the police,” he said.

Later, speaking to the Indypendent away from the crowd, Tinsley reflected on the police violence he had seen at OWS. Among the most high profile incidents have been the pepper spraying of non-violent women. Video footage from Oct. 15 revealed that Deputy Inspector Johnny Cardona punched Felix Rivera-Pitre, a gay Puerto Rican man who is HIV positive, during a rally. Cardona said he was defending himself, while Rivera-Pitre said the worst he did was shoot the cop a dirty look.

“That cop is full of shit,” Tinsley said. “Was [Rivera-Pitre] trying to bite you?”

But even still, Tinsley said that the actual police presence at Zuccotti Park, which the OWS movement has held as its New York home base since Sept. 17, is for the most part non-violent, but that there is daily harassment.

“Brutality is not just physical,” he said. “It is also mental and emotional.”

Tinsley like a lot of people don’t hold all police accountable, and said that the OWS should try to maintain good relations with the officers they can manage to talk to. He even urged more and more activists to become cops, in order to make the department a place with forward-thinking people.

His friend interrupted and said, “That’s the stupidest thing I’ve ever heard.” He added, “I fucking hate the cops.”

I asked him if Tinsley if he thought that even if progressive people joined the police force if it was possible that they would be hardened or pressured to conform to the dominant police culture.

“It’s better to try than to not try,” he responded.

The demand protesters was that the DA investigate the specific case of Rivera-Pitre. It is emblematic for a few reasons. The brutality was so stark, Rivera-Pitre was a homeless minority man with HIV, and the attacker was a “white shirt,” a commanding officer rather than a rough-around-the-edges rookie.

But during various marches, protesters claimed they have been subjected to excessive force, as OWS has yet to be accused of destroying property or threatening people.

Tinsley believed that there should still be dialogue between the two sides, and that it would benefit both the protesters and the police who haven’t acted violently.

“People feel the police hate them,” he said.