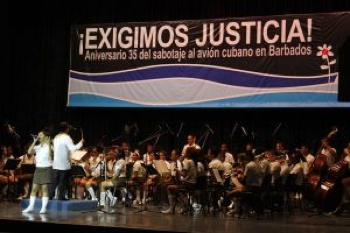 Cuba marked the 35th anniversary of the bombing of a Cubana airlines jet, in which 73 people were killed, with demonstrations against terrorism and a demand for the release of five government agents in prison in the United States.

Cubana flight 455 was carrying 57 Cubans – including the country’s entire Olympic fencing team – 11 people from Guyana and five from North Korea when it exploded just after taking off from Barbados on Oct. 6, 1976.

Starting last year, the date is commemorated as the national Day of the Victims of State Terrorism.

“My entire life has been marked by that terrorist act,” said Camilo Rojo, the grandson of one of the Cubana flight 455 victims, at the end of a vigil held Wednesday night by hundreds of young people in the José Martí Anti-Imperialist Plaza across the street from the United States Interests Section in Havana.

Factories, educational institutions, hospitals and other buildings served as the scenario for political rallies and meetings throughout the day Thursday to protest and commemorate the terrorist attack and the hostile U.S. policy towards Cuba, including U.S. support for fervently anti-Castro Cuban exile groups as well as dissident organisations inside Cuba.

The bombing of the Cubana jet was carried out by a former CIA agent, Luis Posada Carriles.

The day after the anniversary of the bombing, the first of the Cuban Five, a group of Cuban agents convicted of spying and given lengthy jail terms in the U.S., was released from a U.S. prison.

René González was released early Friday after serving 13 years of his 15-year sentence. However, he will have to stay in the state of Florida for three more years of supervised probation, which the Cuban authorities consider a political reprisal.

René and Fernando González (no relation), Antonio Guerrero, Gerardo Hernández and Ramón Labañino were arrested Sep. 12, 1998 in the U.S. and charged with conspiracy to commit espionage.

But in this country the Cuban Five are hailed as heroes in the fight against terrorism, because they had infiltrated and were monitoring violent anti-Castro Cuban exile groups in Miami, Florida.

González’s wife Olga Salanueva says the requirement that her husband remain in Florida for three years is additional punishment and poses a risk to his life, because “we have evidence that there are terrorist organisations” in the southern part of the state, as she said in an interview published on the Cubadebate web site.

The proof of that are “the thousands of people killed and maimed in our country in violent attacks, innocent victims like the (fencing team) on the plane from Barbados and Italian tourist Fabio di Celmo (killed by a bomb in a hotel lobby bar in Havana in 1997). So how much more danger will an agent identified as one of those who was monitoring them and who has been publicly declared an anti-terrorism fighter face?” she said.

In a July 1998 interview, Posada Carriles admitted to The New York Times that he had sent operatives to Cuba to plant bombs in hotels and restaurants to hurt the country’s fast-growing tourism industry. With regard to di Celmo, a businessman, he said “That Italian was sitting in the wrong place at the wrong time. It is sad that someone is dead, but we can’t stop.”

In the United States, the National Committee to Free the Cuban Five concurred with the fears expressed by Salanueva and warned that the risks cannot be underestimated. The group recalled statements to the press by Florida lawmaker Ileana Ros-Lehtinen, who called René González “an enemy of America…who “has American blood on his hands.”

The National Committee said in a statement that “These utterly false charges are a clear incitement to violence, and demonstrate all too clearly the necessity of allowing René to return immediately to Cuba.”

According to the Cuban government, in the space of just 18 months in 1962 and 1963, more than 5,700 terrorist attacks were carried out against Cuba, around 700 of which targeted industrial installations. The government of Raúl Castro says Washington’s “policy of state terrorism” has cost this country 3,478 lives and left 2,099 people permanently disabled.

A jury in Miami, Florida found the Cuban Five guilty on all charges in 2001 and handed them sentences ranging from 15 years to two life sentences.

By contrast, Posada Carriles was acquitted in April by a U.S. federal court in El Paso, Texas, where he was charged with lying to immigration officials, obstruction of justice and immigration fraud.

The Cuban foreign ministry said at the time that the acquittal was a “farce” and that it demonstrated that the U.S. continued to protect a known terrorist.

In a full-page editorial Thursday, Granma, the Cuban state newspaper, called the U.S. government’s continued inclusion of Cuba on its list of states that sponsor terrorism “disgraceful” and an attempt to justify “its criminal policy of attacks” in the eyes of public opinion.

Analysts point out that on a visit to Cuba in March this year, former U.S. president Jimmy Carter (1977-1981) said the U.S. claim that Cuba promotes terrorism “is obviously uncertain,” and called for this country to be removed from that list.

Granma also says the treatment of the Cuban Five is “evidence of the double standards of U.S. policy concerning the so-called war on terror.”

With respect to Cuba’s cooperation in fighting terrorism, Granma points to a 1973 agreement signed with the United States to combat air and maritime piracy, as well as the time that Cuban intelligence warned the U.S. of an assassination attempt against then president Ronald Reagan.

In May 1998, the Cuban government also provided the administration of Bill Clinton (1993-2001) and the FBI with abundant documentary and testimonial information on activities by “terrorists on U.S. soil with ramifications in Central America,” the Granma editorial says.

“However, no terrorist was arrested, and there was no sign of action,” it says, adding that just three months later came the arrest of the five Cuban agents, who were “the main source of that valuable information, and who prevented” further attacks.

On several occasions since the 9/11 attacks in New York and Washington in 2001, the Cuban government has invited Washington to engage in talks on bilateral cooperation in problems including terrorism. The latest proposal was set forth in late September by Foreign Minister Bruno Rodríguez. Cuba has received no response to any of these initiatives, according to Granma.

This article was originally published by IPSnews.Net