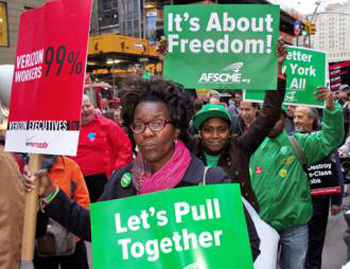 Protests against union-busting and police brutality in New York City last week–while smaller than the biggest mobilizations recently–show that the Occupy Wall Street (OWS) movement is continuing to grow and relate to the struggles of working-class New Yorkers.

In particular, the connections between organized labor and the OWS continue to deepen–with ongoing protests against the Sotheby’s auction house where Teamsters have been locked out of their jobs, a big rally in support of Verizon workers who are fighting for a fair contract, and a planned action against the Department of Education in support of teachers.

The first steps toward building these connections were made by Occupy activists reaching out to unions with support for local struggles and seeking support themselves for the Occupy movement. But New York unions have returned the favor with mobilizations to strengthen the Occupy struggle and defend it against city threats to clear the encampment.

The 20,000-strong demonstration led by unions and community organizations on October 5 represented an important milestone for the movement–a moment when Occupy Wall Street proved it was something larger than the encampment of young students and workers at a single downtown park.

Prior to this, the number of unions endorsing the action continued to grow, and some labor officials–notably John Samuelson, president of Transport Workers Union Local 100, which represents the city’s bus and subway workers–appeared at the encampment at Zuccotti Park, renamed Liberty Plaza by protesters. But October 5 was the day that first showed that OWS was speaking for much larger numbers of working-class people.

A little over a week later, when Mayor Michael Bloomberg threatened to evict the Occupy movement from Zuccotti Park on October 14, labor put out the call for its members to mobilize overnight to defend the struggle. The push from unions got large numbers of rank-and-file members, along with staffers and officials, out to the park by 5 a.m.–making it impossible for city officials to go ahead with their plans. Labor’s mobilization also pressured numerous elected officials to call on the mayor not to invade the park.

Meanwhile, Occupy protesters have given an infusion of energy to an ongoing campaign by Teamsters Local 814 in defense of 43 art handlers who have been locked out of their jobs at Sotheby’s auction house.

Sotheby’s is the epitome of a playground for the 1 percent. Its board includes Bloomberg’s partner, former New York state Superintendent of Banks Diana Taylor, who is also a director of Brookfield Properties, the real estate firm that owns Zuccotti Park.

But though Sotheby’s made $774 million in revenue last year, it wants to eliminate workers’ retirement plans and permanently replace skilled art handlers with inexperienced, outsourced workers. “They’re trying to take us back to the 1950s,” explained Local 814 member Donald Pearson. “I don’t have health insurance and a salary, my family is worried, and Sotheby’s is trying to deny us unemployment. This is unfair.”

Occupy activists have organized disruptions of auctions and invaded the restaurants of Sotheby’s board member Danny Meyer. On October 20, OWS’s Labor Outreach Committee arranged for a school bus to bring Occupy supporters to a protest outside Sotheby’s. As the protesters piled out of the bus and joined Teamsters on the picket line, both groups chanted the OWS slogan, “We are the 99 percent!”

OWS supporters weren’t the only ones on the picket line in support of the Teamsters. Other unionists came from the Communications Workers of America, in the midst of a struggle with Verizon; the 1199SEIU health care union; and the Professional Staff Congress, the union that represents CUNY adjuncts and professors.

Jackie DiSalvo, a CUNY professor wearing her PSC hat, said, “Workers everywhere are under attack. CUNY faculty are under attack–our contract fight hasn’t gone far. But I went back to Wisconsin, during the Capitol occupation in Madison, and for the first time in a while, I saw the beginning of a real labor movement.”

The rally ended with Sotheby’s workers and Occupy protesters gathering together to use the people’s mic for a thank you to all the union supporters and give one last message of solidarity: “All day, all week, Occupy Wall Street!”

The following day, October 20, OWS expanded its labor participation to the struggle of Verizon workers, whose fight for a fair contract led to a two-week strike in August that involved workers up and down the East Coast.

Hundreds of Occupy supporters joined Verizon workers from the Communication Workers of America (CWA) and International Brotherhood of Electrical Worker (IBEW) for a 1,000-strong demonstration that marched from Verizon headquarters down to Liberty Plaza, and then on to Broad Street near the New York Stock Exchange. According to Alison Kilkenny of In These Times, the march was originally supposed to end at a Verizon Wireless store, but the store closed early when managers heard about the protest.

CWA Vice President Chris Shelton told protesters, “Verizon is the absolute symbol of corporate greed in this country.” Verizon raked in $10 billion in profits in 2010–and $3.2 billion in the second quarter of 2011 alone. Over the last four years, the company’s top five executives were paid a total of $258 million in salaries and bonuses. Yet the company hasn’t paid a dime in federal income taxes for the last two years–in fact, it received a $1.3 billion federal rebate from its 2010 tax bill.

But Verizon is still demanding concessions from the unions worth up to $1 billion a year–the equivalent of about $20,000 for every worker, according to the CWA.

More labor protests are being planned each day at Occupy Wall Street. On October 25, teachers and parents are planning to “Occupy the Department of Education” at a meeting of the Panel for Educational Policy, Mayor Bloomberg’s undemocratic version of a school board. And the Coalition of Black Trade Unionists is calling for a labor rally in support of Occupy Wall Street on October 29.

Sotheby’s striker Donald Pearson summed up how labor activists are feeling about their supporters from Occupy Wall Street: “We love them, we need them.”

Julian Guerrero and Danny Lucia contributed to this article.

This article was originally published by SocialistWorker.org.