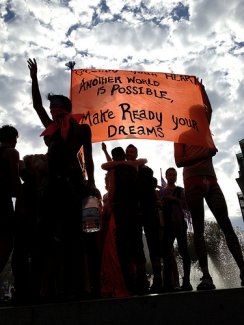 I came of age in the 1980s which was, at the time, considered the epitome of pop culture, selfishness, competition, and corporate domination. The “greed is good” line from the movie “Wall Street” – meant as irony by the writer/director – became a motto for America. Indeed, the unbridled pursuit of material wealth was synonymous with “freedom.” Concurrently, in the context of the prevailing capitalistic system, British Prime Minister Margaret Thatcher decreed to the world: There is no alternative (TINA).

Around the time I graduated from college in the early 1990s, the so-called disaffected youth had aided the election of a modern new president, viewed as almost a messiah by his flock. Sound familiar? The difference back then was that the deleterious effects of rugged individualism, blind ambition, unbridled greed, and neoliberalism had not yet permeated all of the masses. The poor, many people of color, and most indigenous people remained as marginalized by society as ever, but a critical number of the middle and upper-middle class citizens still had access to their “piece of the pie” to which they felt entitled. A faction of twenty-somethings that didn’t believe in the system of greed found themselves underemployed during this era for two main reasons: 1. A large number of available jobs had gone from union, livable-wage, skilled or professional labor positions to low-paying service-sector positions, and 2. The higher-wage jobs available were detrimental and damaging to people and the environment; these young adults did not want to partake in such a corrupt, destructive system. Those particular Generation Xers were dismissed as “slackers,” and though that label was inaccurate, it was a more useful meme for the powers that be to declare that the dissenters were lazy rather than admit that they were purposefully noncompliant with the fraudulent, unjust, unethical status quo.

However, the personal rebellion of these discontented Generation Xers were few and far between – as evidenced by the many now middle-aged members who safely reside in the sanctity of their suburban comforts – so they did not cohere into anything more than discreet individual acts, for the most part. Moreover, the stresses faced by the youth then did not necessarily amount to the kind of dire financial circumstances, grim future prospects, and desperation faced by the youth of today. [ Eric Wagner] photo: Eric Wagner

Over the course of the past thirty years, popular culture, entertainment, narcissism, gluttony, and corporate imperialism have soared to heights unimaginable in the time of Centipede, the Cosby Show, and the Commodore 64. Until recently, the endless proliferation of these evils seemed as inevitable as the economic growth that resulted from them, and no one seemed to notice, no one seemed to care. While the WTO protests in Seattle in 1999 and other similar events lent glimmers of hope, these twinkles were usually quickly and summarily extinguished by our own complacency and by the media blanket that kept all winds of change in the margins.

Now, the first contradiction of capitalism has at last emerged, just as predicted. (So has the second, more ominous contraction which involves the ecosystem rather than the economic system, but that vital subject will have to be left to another conversation.) In an era marked by the election of yet another phony Presidential savior, the somnambulant masses have been forced to awaken. Not only have the conditions for the already marginalized grown excruciatingly horrific, but the members of socioeconomic classes who formerly expected to have a solid, productive outlook have been offered instead a harsh present and a bleak future. And even those who once assumed their lives secure have found their assumptions trashed along with their savings. It took these dismal conditions for people to finally proclaim that enough was enough, and for some of them to rise up and speak out on their own behalves.

The Canadian magazine Adbusters has been chronicling the inevitable downfall of Western Civilization and calling for massive resistance for over two decades now, which is why it is not surprising that they perceived the correct place to confront the masters of the modern world. But no one could have predicted that their request just months ago to Occupy Wall Street would have come at such an opportune moment.

What is happening in New York City’s Zuccotti Park and around the country is quite similar to what occurred during the capitol occupation in Madison, Wisconsin. People who could no longer stand to be controlled and exploited finally exerted their collective force. But more importantly, they demonstrated that the system in place to which we have been required to adhere is far from the only alternative.

While the corporate media deride the “anarchy” of Occupy Wall Street, they are not completely off the mark. Few are willing to admit that, just as in the Madison capitol, what is occurring among members of the rebellion on Wall Street is anarchism at its finest: cooperation, human relations based on shared values, organic collectives of non-hierarchical groups, and democratically advanced ideas. At the height of the Madison occupation in February/March 2011, thousands of people virtually lived in the state capitol. They organized themselves into units to maintain peace, to clean, to educate, to administer first aid, to distribute food and supplies, etc. No one concerned themselves with the potential for crime – and in fact, no one was harmed, and no personal items were stolen as thousands of people amassed in an unguarded space. There existed nary a fear for person or property. The society of the occupation was one to be envied and emulated in “real” life. It appears that the experience at Occupy Wall Street is similar. I learned that they have even constructed grey water filtration systems and composting on-site. These occupations lay bare the simple truth that There Is An Alternative (TIAA). In fact, there are many options, as long as we have the creativity and the will to imagine and realize them. Of course, this discovery is precisely what the power elite fear the most, that their systems – THEY – are not necessary.

Toward a Collective Future

So, I sincerely thank you, occupiers. As I stand in awe of and in solidarity with all of you on Wall Street, in D.C., and all over the country and the world, I hope that instead of capitulating to the moneyed forces and voices who insist upon concrete demands – which will undoubtedly allow for the continuation and promulgation of their deceitful, destructive systems – the movement imagines a whole new paradigm for our collective future. It cannot be accomplished through traditional means; it will not be expressed through traditional pathways. In addition, I hope that the resisters continue to see beyond their own personal, immediate concerns and incorporate the needs of the forgotten, those who have always been suffering – the poor, the homeless, people of color, and the indigenous. The movement must never forget to include not only the currently disenfranchised who thought they could succeed under this system, but the always disenfranchised who never had a chance. In short, the movement will be worthwhile and long-lasting if it can embrace a future society in which “we” always comes before “me.” There is a better alternative. It is here now, unless we retreat back to our superficial comforts, unless we surrender to our own egos, unless we cease to envision a healthier tomorrow for us all.

This article was originally published by CommonDreams.org