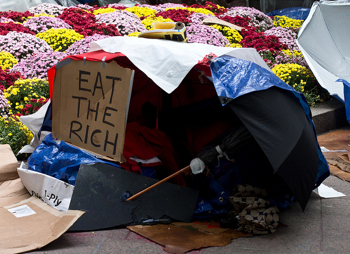 The first thing you hear from a lot of people about the Occupy Wall Street protests is, “What are their demands?”

Well, they don’t really have anything specific, no “implement Section 148 (a) (7) (iii) of the Hamptonwick-Feinschmecker Act.” They’re about justice. People are simply sick of living in a society where the top 1 percent of the population owns half the wealth and is so greedy that they want even more, at the expense of crushing everyone else. (Which they take macho pride in, like the landlord I once had who told me, “if you’re looking for ethics, you’ll find it in the dictionary under E.”)

I’ve been down there three times: first for the demonstration Sept. 30—about 2000 people; again on Oct. 5 (union-sponsored march, more than 15,000); and late afternoon on Oct. 7, just to see what was up. It’s snowballing, despite Mayor Hosni Bloomberak’s attempts to have the cops discourage protests with petty dominance-submission games, like blocking off two-thirds of Broadway so the thousands of marchers had to funnel into a space barely four abreast.

People I talked to at Zuccotti Park seemed to be mostly underemployed twentysomethings, recent college graduates trying to survive with a McJob, a boatload of debt, and astronomical rents ($2400 a month for a 3-bedroom in Bushwick!).

The wingnut factor is refreshingly low, although it’s higher in the park than on the marches. There is a bit of an undercurrent of Ron Paul economic theories, which could lead into international-Jewish-bankers territory. Overall, though, the occasional 9/11 conspiracy-spewers are far outnumbered by people who simply want to stop economic terrorism.

It’s really encouraging. It’s great to see people out there and angry, instead of begging Wall Street-owned politicians for token favors. I mean, when I see people chanting “Shame! Shame!” at a protest, I think “how is that going to affect an absolute sinverguenza?”

I hope it snowballs even more than it already has. This is going to be complicated, going from a zygote to a blastocyst to a fetus to a baby without any fatal defects developing. It has to move to more organized power, to more concrete demands, without getting taken over by one group, without getting torn apart by factional disputes, without selling out. The unions are the obvious place to look, but they have to be willing to strike, not channel it into “let’s all vote for Obama in 2012.”

As tiny and ineffective as we feel sometimes, the powers that be are scared. They saw what happened in Tunisia and Egypt last spring, here and in Paris in 1968, and they know that 1 percent of the population cannot dominate the other 99 percent in any kind of democracy.

That doesn’t mean we’ll succeed. But if you’ve got ideas, pass them on.

In the words of the United Hungry Felines anthem, “Yet what sound on earth is weaker than the feeble meow of one… Cat solidarity forever!”