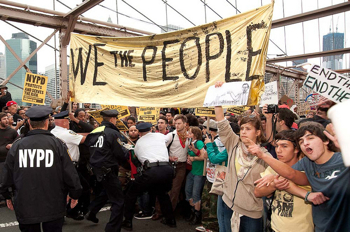 #OccupyWallStreet is evolving. Now in its third week, the protest movement not only continues to grow—it is maturing and becoming stronger in impressive ways.

What started as a few hundred independent activists gathering for a protest on Wall Street, and a few dozen having the resolve to extend their demonstration by camping out in Manhattan’s financial district, has become something much bigger. It has become the embodiment of longstanding progressive hopes that Americans who have been hit hard by the economic crisis—those left jobless, in debt, underemployed, foreclosed, or insecure—would finally get mad enough to publicly vent their outrage at the oligarchs who have for too long perverted our democratic politics and created gross inequality in our country.

The movement is rapidly spreading to cities around the country—to Boston, Chicago, Los Angeles, St. Louis, Philadelphia, San Francisco, and Washington, DC., among many others. And it has progressed in some very promising respects. Here are three:

1. The Demand Problem Has Been Solved

Throughout the first couple weeks of the action, the question of whether #OccupyWallStreet had clear enough demands was constantly raised, both by progressive commentators and in the mainstream media coverage the mobilization was receiving. This issue has ceased to be a serious problem because, as the protests have grown, their central focus has become significantly more defined.

During the first week, there was a real problem: When you had just a few dozen people at occupied Liberty Plaza, individual idiosyncrasies stood out. If several of the protesters were Ron Paul libertarians or were obsessed with eliminating the Federal Reserve, another few were 9/11 conspiracy theorists, and several others, when asked by reporters, responded by saying, “We don’t believe in demands,” you ended up with a bona fide messaging crisis.

But that is no longer the situation. The mobilization has now drawn thousands of people who have rallied behind the call of “We Are the 99 Percent.” MoveOn.org summed it up this way: “What do the protesters want? A solution to the jobs crisis, corporate money out of politics, fairer tax rates, and policies that work for 99% of Americans instead of the 1% at the top.”

But you don’t have to take one organization’s word for it. Go to the “We Are the 99 Percent” Tumblr. Read the incredibly moving personal testimonials presented there. Then tell me this protest does not have a message.

For observers who want more specific grievances or detailed policy proposals, declarations now abound, ranging from bold and inclusive statements issued by Wall Street protesters themselves via their general assembly to more modest reform manifestos offered, with only a wee bit of condescension, by figures such as New York Times columnist Nicholas Kristof.

Critics who remain preoccupied with the demand issue are missing the point. As Betsy Reed has smartly noted in the Nation, well-formulated lists of proposals do not guarantee that your actions will be taken seriously. (Anyone remember “The May 12 Coalition” or “One Nation Working Together”? Not too many people do, despite strong organization and tight messaging.) Conversely, actions such as #OccupyWallStreet that effectively capture the public imagination and inspire participation despite vague demands can contain great promise—and should be celebrated for the potential they offer.

Ultimately, the movement’s outcry against corporate power is no more diffuse than the Tea Party’s denunciation of “big government.” Protesters do not need to hash out exactly what percentage the capital gains tax rate should be, or precisely how many millions of dollars in student debt should be forgiven, in order for them to have an impact. Like the Tea Party, a broad social movement uprising can do much to alter the climate of public opinion, something that can benefit many different progressive campaigns in the medium to long term. Indeed, many who are running more targeted campaigns (with more narrow and winnable goals) are productively linking up with the mobilization. Which is a second promising development:

2. The Occupation Has Drawn Together an Amazing Coalition

When it started, #OccupyWallStreet was made up of students and independent activists who responded to a call to action that was initially put out by Adbusters but that enjoyed very limited institutional backing. The major organized constituencies of the left—unions, community groups, environmentalists, faith based organizations, and the like—were not part of the mobilization. This was a problem, suggesting that the protests might not have significant reach and would have limited resources at their disposal.

Yet as the actions have gained momentum, the institutional groups have come. Nationally, all sorts have flocked to support #OccupyWallStreet, including but not limited to MoveOn.org and other major organizations associated with the American Dream Movement. In New York City, major unions have declared their support for #OccupyWallStreet, and a veritable who’s who of labor and community organizations are marching to the financial district to show their solidarity.

In just one amazing display of unity among many, the city’s Transit Workers Union (TWU) issued a blistering condemnation of the NYPD this past weekend after police, in the process of arresting some 700 marchers on the Brooklyn Bridge, commandeered three public buses and forced TWU members to transport their captives. “TWU Local 100 supports the protesters on Wall Street and takes great offense that the mayor and NYPD have ordered operators to transport citizens who were exercising their constitutional right to protest—and shouldn’t have been arrested in the first place,” the union president said.

3. The Movement Is Becoming an Umbrella for Economic Justice Causes Nationwide

As the movement spreads nationwide, #OccupyWallStreet is becoming a unifying umbrella under which people outraged about corporate greed can get involved in supporting any number of ongoing efforts to create living-wage jobs, end foreclosures and predatory lending practices, hold banks accountable, get corporate money out of politics, and otherwise promote economic justice and genuine democracy. Much as the Tea Party has served as an overarching brand for conservative discontent, #OccupyWallStreet is giving people the opportunity to identify with a national struggle while advancing causes relevant to their local communities.

In Boston, community groups doing anti-foreclosure actions at Bank of America were able to merge their efforts with #OccupyBoston demands. Likewise, #OccupyLA joined with the United Teachers of Los Angeles in a bank protest during one of its first days in existence. Organizers who have been working on anti-corporate campaigns for months or years now are starting to benefit from the new energy—and new media attention—afforded by a movement that is now seen as a national phenomenon. #OccupyWallStreet, in turn, benefits whenever greater numbers of local drives identify with their overarching effort, when their coalition is broadened, and their credibility as a national force is reinforced by the local buy-in.

The potential for expanding this type of solidarity is great, and it is likely that more groups will be linking up their campaigns in the days and weeks to come. Fortunately, #OccupyWallStreet, which has already made some remarkable strides, is evolving still.

(This article was originally published by Dissent Magazine)