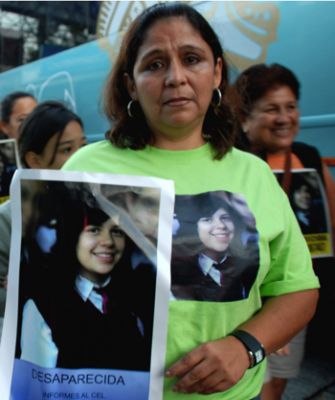 On Sept. 10, thousands of people marched through the besieged resort town of Acapulco to greet the Caravan for Peace with Dignity and Justice led by Javier Sicilia, a poet who ignited a nationwide movement against drug war violence this spring after his son was murdered.

In recent years, Acapulco has endured a plague of violence — beheadings, massacres of tourists, kidnapping of schoolchildren and demands from criminal gangs that teachers pay 50 percent of their salaries as protection money. In the vast majority of the cases, no one has been charged with these crimes.

Armed with signs and T-shirts that said “No more violence,” “Stop kidnappings and crime,” and “No more militarization, we want education,” locals faced down their fear of being identified by halcones or cartel spies, and marched for peace.

“They asked me if I was afraid to participate,” said Yuridia Betancourt, whose son Christian Obeth was kidnapped on March 19. “I’m panicked. But I’m more afraid to stay at home with my arms crossed.”

However, moments after the peace march swept by Zaragoza Street, several blocks from the central plaza where the marchers rallied, unidentified gunmen shot and killed Antelmo Petatan Vasquez in his taxi in broad daylight, a fate shared by a growing number of cabbies who are often suspected of working as informants for the cartels or are forced to pay them “quotas” in exchange for the right to work. Petatan Vasquez was one of eight people murdered that day in Acapulco; three were killed during the march.

Petatan Vasquez’s killing marked another in the more than 40,000 deaths that have occurred in Mexico since conservative President Felipe Calderón escalated the government’s war on drug cartels in January 2007. It also underscored the challenges faced by Sicilia and the antiwar movement as it ventured into southern Mexico for the first time, hoping to build on earlier momentum.

Rural and mountainous, southern Mexico is more impoverished and has a much greater percentage of indigenous peoples than the northern part of the country. And while southern Mexico generally has less violent crime than northern states, organized crime and government security forces are victimizing certain sectors of the population at alarming rates.

Located several hundred miles southwest of Mexico City, the state of Guerrero bore the brunt of a government counter-insurgency campaign against leftist guerrillas from the 1960s to 1980s. The Guerra Sucia (or, “Dirty War”) carried out by the army and its paramilitary allies officially ended almost three decades ago. Nowadays, Guerrero residents are suffering some of the worst abuses of the drug war, as, the military remained in Guerrero and a climate of government corruption has assured that crimes committed against locals are almost never punished.

“The Dirty War never ended in Guerrero,” argues Rosario Cabañas, the niece of Guerrero school teacher and guerrilla leader Lucio Cabañas who was killed in 1974. “Unfortunately, thanks to [the Dirty War], peace and justice were lost. For 40 years, there has been impunity and injustice.”

Calderón’s militarized response disrupted drug trafficking routes and the cartels began to battle for control of Guerrero, which includes the coastal enclave of Acapulco. Residents found themselves caught in the middle. Unsurprisingly, the conflation of political and criminal violence gave birth in Guerrero to Mexico’s first narco-paramilitary organization, the “Liberator of the People Army” led by local political boss Rogaciano Alba.

Composed of 15 buses carrying more than 700 activists, journalists and family members of victims, the caravan rolled through 19 towns and cities in seven states over 10 days in mid-September. At every stop, caravaneros and locals marched for peace. The marches always ended in rallies where drug war victims from the north shared the stage with local victims to tell the world about how they have suffered in the so-called “war on organized crime.” At each stop, Sicilia’s Movement for Peace with Justice and Dignity collected complaints about violence and human rights abuses, just as they had done in the north.

Mexico’s drug cartels were significantly strengthened in the early 1990s as junior partners to their counterparts in Colombia who were finding it increasingly difficult to ship cocaine to the United States through the Caribbean. In recent years, thanks in large part to the Colombian cartels’ decreased control over shipping routes, the Mexican cartels have become fully diversified organized crime syndicates and have expanded into new areas such as kidnapping, extortion, prostitution and human trafficking.
Approximately 40 Central American migrants traveled with the Peace Caravan, calling attention to how the cartels frequently prey on immigrants.

Mexico’s harsh U.S.-backed immigration laws force the hundreds of thousands of Central American migrants who enter Mexico each year to travel clandestinely, which puts them at great risk of being kidnapped by organized crime, caravan participants explained. When migrants are detained by authorities, they are sometimes handed over to criminal groups for a bribe.

During the caravan, the Central American migrants described how the gangs take people like themselves to safe houses where they are forced to call their families or friends in the United States and hold the telephone in their hands while the criminals torture them into begging their families for ransom money: “I saw them cut off a 14-year-old boy’s finger while his father was listening on the phone,” said one Salvadoran immigrant who says that he, too, was tortured.

Female immigrants are sometimes forced into prostitution or made to perform in pornographic movies. German Guillermo Ramirez Garduaza of the “Santa Faustina Kowalska” migrant shelter in Veracruz estimates that 80 percent of female Central American migrants are raped in Mexico.

Danira Meléndez, a Honduran migrant, recalled how her coyote (paid guide) demanded that she have sex with him. “He told me, ‘Here, I’m just one man. But I work with the Zetas, and if I turn you over to them, it’ll be 15 or 20 men raping you,’” Meléndez recounted. “We know that female migrants are easy sexual merchandise for organized crime.”

Before the Movement for Peace with Justice and Dignity emerged, drug war victims were terrified, isolated and silent. On the two caravans, victims learned public speaking skills and how to organize protests and press conferences and hold more effective meetings with public officials. Now that the caravans are over, the victims will return to their communities, most of which now have local antiwar committees. Whereas before drug war victims were shunned, now they are in a position to become community leaders.

Citing lower turnouts at Peace Caravan events in the south, the Mexican media have portrayed the antiwar movement as losing support. However, this does not take into account the fact that the south has experienced less drug war violence than the north and in places that have been hard hit — like Guerrero and Veracruz — thousands of people turned out to protest the war. Moreover, the south has a long tradition of militant grassroots organizing (see sidebar) and resistance to military occupation that most of the north lacks. Whereas most northern drug war victims are just beginning to organize and define their politics, southern drug war victims are joining experienced organizations and hitting the ground running.

If southern organizations continue to collaborate with Sicilia’s national movement, they will likely provide a counterweight to Sicilia’s strong focus on engagement with authorities, which has included meeting with leaders of all three branches of a government that is widely seen as being complicit in the drug trade it claims to be fighting.
“We still don’t understand why they dedicate so much energy and effort to dialogue with a political class that long ago lost all will to govern and is nothing more than a gang of criminals,” the Zapatistas’ Subcomandante Marcos recently wrote, reflecting the sentiment of many groups in the south.

Mexico holds presidential and congressional elections next year. It remains to be seen how the budding anti-war movement will affect the electoral process. Ultimately, the country’s future depends on whether Mexico’s civil society can be mobilized to cleanse the state of a culture of corruption and impunity that exists at all levels of government.

Kristin Bricker is a Mexico-based freelance journalist covering militarization, social movements and the drug war in Latin America. She blogs at mywordismyweapon.blogspot.com.

While the Mexican state of Guerrero is plagued by both drug war violence and police corruption, it is also home to one of the most innovative criminal justice projects in the country: the community police. In 1995, when indigenous residents of Guerrero’s Sierra Costa region could no longer tolerate the general state of lawlessness in their communities, they turned to traditional indigenous policing methods. Seventy-eight towns replaced government police with unpaid, elected community police and prison terms with community service.

While the community police have been unable to keep cartels from trafficking drugs through their territory, they have been able to minimize the violent crime that is often associated with the industry. The community police claim that over the past 16 years they have reduced crime in their region by 98 percent.

“There’s hardly any robbery, rape, or violence. The criminals fled the area, because they know that the community will sentence them to five, seven, eleven years of community service,” explains Emilio, a community police officer. “With the government, if they arrest you, they’ll let you go the next day if you pay them. We don’t accept bribes. Here, you work hard every day, and every night you return to jail. And you always serve out your sentence. You think [criminals] want to wind up like that? No.”

The community police sent a commission to Acapulco with a message to the Movement for Peace with Justice and Dignity: “We hope that our experience … will be part of your struggle. There is no other way to confront violence than with collective organization.”