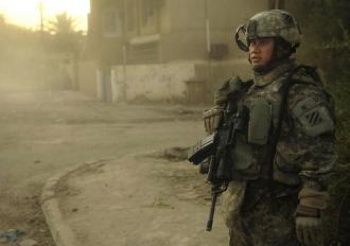 More than a million Iraqis dead. Nearly 5,000 U.S. military personnel killed, and some 32,000 more maimed, physically and psychologically. Some $4 trillion spent on war–money that could have paid for schools, health care and programs to create jobs.

Yet those staggering numbers don’t even begin to capture the full horror of the war that the U.S. unleashed on Iraq in March 2003. And while the U.S. is finally winding down its occupation, Washington is maneuvering to keep its dominant role in the Middle East by maintaining Iraq as a U.S. client state while ratcheting up pressure on Iran.

Barack Obama announced last week that all U.S. forces will be withdrawn from Iraq by the end of the year. But the pullout doesn’t represent an abandonment of Washington’s aim to dominate the Middle East, but rather a rationalizing and retooling of U.S. imperialism.

As the savage war in Afghanistan grinds on–along with regular military drone strikes in Pakistan and Yemen and the “humanitarian” intervention in Libya–the Obama administration has hardly embraced the just foreign policy that Democratic voters hoped for back in 2008. The antiwar movement in the U.S. and internationally still has its work cut out for it.

When the 2003 invasion began, Iraq was still staggering under the weight of economic sanctions imposed by the U.S. following the 1991 Gulf War. The U.S. had formally launched that war to expel the Iraqi army from neighboring Kuwait, but took the opportunity to slaughter large sections of the Iraqi military.

The severe sanctions regime–backed by the United Nations–plunged what had been the most developed country in the Arab world into poverty and hunger. When confronted with the fact that an estimated half a million Iraqi children had died in the 1990s as a direct result of the sanctions, the Clinton administration’s Secretary of State Madeleine Albright declared that “we think the price was worth it.”

But a decade later, according to George W. Bush’s neoconservative handlers and a complicit corporate media, Saddam Hussein’s Iraq remained the greatest threat to U.S. security. Tony Blair, then Britain’s prime minister, made the bogus claim that Iraq could launch an attack that would hit Europe with weapons of mass destruction “in 45 minutes.”

Secretary of State Colin Powell one-upped Blair with a ludicrous show at the United Nations in which he sought to prove that Iraq had WMDs–an unsubstantiated claim puffed up by pro-war propagandists in the media like Judith Miller of the New York Times. Antiwar critics who made the obvious point that the U.S. was more interested in control of Iraqi oil than peace and democracy were dismissed as left-wing ideologues blind to the dangers of the modern world.

Yet at the same time as the neocons painted Saddam Hussein as capable of killing millions with chemical weapons or even a “dirty bomb” made from radioactive materials, they also promised a “cakewalk” for the U.S. military in Iraq. Vice President Dick Cheney predicted that the U.S. troops would be “greeted with flowers.”

Instead, of course, the U.S. was faced with a tenacious resistance through guerilla warfare and improvised explosive devices (IED) that killed and caused traumatic brain injuries on an unprecedented scale.

The U.S. military unleashed its full arsenal on the resistance in Fallujah in two battles that leveled the city and turned what remained into an open-air prison. Civilian casualties–“collateral damage” in military jargon–mounted as U.S. troops increasingly saw any fighting age male as a likely insurgent.

Next came the sectarian civil war fomented by U.S. attempts to organize Iraqi politics along religious lines. The Shiite Muslim majority, long oppressed by Saddam Hussein’s dictatorship, got the effective backing of U.S. troops as it drove Sunni Muslim from entire areas of Baghdad. Once the Sunni-dominated resistance was sufficiently weakened, the U.S. offered bribes and protection to Sunni politicians and guerilla fighters if they would join U.S. troops in fighting Islamist groups linked to al-Qaeda.

This effort to buy off the resistance succeeded in winding down the civil war, but it hardly delivered the peace and prosperity that Bush promised Iraqis.

The Shiite Islamist dominated party of Nuri al-Maliki has repeatedly balked at following through on a U.S.-brokered deal to incorporate elements of the former Sunni resistance into Iraq’s armed forces. The economy remains in tatters, with the oil industry generating 95 percent of the country’s revenue, but just 1 percent of its employment. Despite the big increase in oil prices in recent years, some 25 percent of Iraqis live under the poverty line, and at least 15 percent of the workforce.

And as Joshua Foust of the Atlantic reported in August, the official economic figures are highly suspect:

To ensure a business-friendly climate for the major oil companies and other investors, the Maliki government has retained Saddam Hussein’s hostility to free and independent trade unions. Labor repression is rife. In its 2011 survey of Iraq, the International Trades Union Council stated:

In January, staff from Baghdad’s most famous hotel went on strike demanding a safety bonus after numerous mortar attacks and the death of two staff. Also in January, the president of Basra’s Iraqi Teachers Union was imprisoned, and the government sought to interfere with its elections. Iraqi police raided and shut down the offices of the electricity unions.

In March, after oil workers protested over low pay and their union’s illegal status, union leaders were transferred, while in June, dockworkers protesting at the prohibition of unions in ports south of Basra were surrounded by troops and their leaders transferred. Trade union rights in law are very restricted.

While the all-out war has ended, Iraq remains a murderous place, with assassinations and bombings still routine. In August, a synchronized bombing campaign targeting Shiite Muslims in 13 cities killed at least 74 people and injured about 250 others.

Even Iraqi Kurdistan, supposedly a model for a free and democratic Iraq in the wake of U.S. protection for the region since 1991, is dominated by thuggish and corrupt political parties. Riot police attacked peaceful pro-democracy protests last spring, injuring about 100 people.

The push for greater democracy in Iraq has come in spite of the U.S. occupation, not because of it. When a protest movement took off in February in the wake of the Egyptian Revolution, it was challenging the U.S.-installed Maliki government for its corruption and failure to provide basic necessities like electricity.

So much for George W. Bush’s infamous “mission accomplished” claim in 2003.

Iraq was supposed to be a showpiece in Washington’s effort to remake the Middle East. It was the low-hanging fruit in the drive to establish a revived U.S. empire–the first step towards knocking out the Syrian regime and squaring off militarily against Iran, which also faced a big U.S. military presence on its eastern border with Afghanistan.

Instead, Iraq is a shaky client at best. Maliki’s top rivals for political influence, Shiite cleric Moktada al-Sadr and Ahmed Chalabi, the ex-favorite of the neocons, both look to Iran for political support. Maliki, too, has carefully tended to relations with Iraq’s biggest neighbor, receiving Iranian President Mahmoud Ahmadinejad in a state visit that left Washington fuming.

The U.S. still hopes to secure an agreement with Maliki to keep a few thousand U.S. military advisers to train Iraqi troops on the use of U.S. military equipment. But that would be only a shadow of the footprint that the U.S. once hoped to have in Iraq.

Now the U.S. will have to jockey with Iran for influence in Baghdad–and it’s already clear that Iran has the upper hand. That’s why the Obama administration preceded its announcement of the troop pullout from Iraq with a loud but highly dubious accusation that Iranian agents were plotting to assassinate the Saudi Arabian ambassador to the U.S. The message: the U.S. may be getting out of Iraq, but it will continue to ratchet up pressure on Iran.

The exit of U.S. troops from Iraq won’t be followed by a going-out-of-business sale on U.S. military assets. As journalist Nick Turse reported on TomDispatch.com:

Last year, the Washington Post reported that the U.S. had deployed special operations forces in 75 countries, from South America to Central Asia. Recently, however, U.S. Special Operations Command spokesman Colonel Tim Nye told me that on any given day, America’s elite troops are working in about 70 countries, and that its country total by year’s end would be around 120.

These forces are engaged in a host of missions, from Army Rangers involved in conventional combat in Afghanistan to the team of Navy SEALs who assassinated Osama bin Laden in Pakistan, to trainers from the Army, Navy, Air Force and Marines within U.S. Special Operations Command working globally from the Dominican Republic to Yemen.

Rather than sweeping–and prohibitively expensive–invasions and occupations, the new military doctrine calls for weaving U.S. Special Forces and CIA operatives into military operations in scores of countries worldwide. And in place of Bush’s narrow “coalition of the willing” in Iraq, Obama is building military alliances as the cover for the kind of action the U.S. wants to see–from dragging NATO into funding the Libya intervention to strengthening U.S. military ties with China’s rivals in Asia.

Under this plan, the big war in Iraq–and, the administration hopes, eventually in Afghanistan, too–will end, giving way to countless small conflicts in which the U.S. acts as weapons supplier and adviser. The grand imperial dreams of February 2003 may be gone. But U.S. imperialism remains–as deadly as ever.

This article was originally published by SocialistWorker