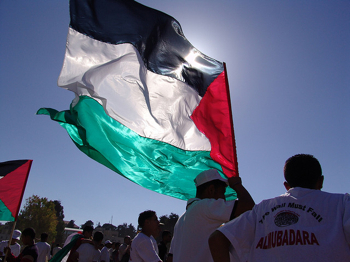 What do you do if your decades-long campaign to bring about an independent Palestinian state on those fractions of historic Palestine known as the West Bank and Gaza Strip has resulted in total failure?

The answer, if you are the Western-sponsored Palestinian Authority (PA) in Israeli-occupied Ramallah, is to pretend you have a Palestinian state anyway and to get as many other countries to join in this charade as possible.

This appears to be the essence of the PA strategy to gain admittance for the “State of Palestine” to the U.N. General Assembly.

The PA has lobbied hard for countries to support the move, and a number of states, particularly in Latin America, have extended full diplomatic recognition to the Ramallah authority. The New York Times cited diplomats who say that if brought to a vote in the U.N. General Assembly, the measure would likely pass.

The PA’s push for recognition of a Palestinian state is the diplomatic counterpart to its much-touted “institution-building” and “economic development” efforts, which are supposed to create the infrastructure for a future state.

But the institution-building program is nothing more than a mirage, boosted by public relations tricks and good press.

In fact, the main “institutions” the PA has built are the police state and militia apparatuses used to repress political opposition to the PA and any form of resistance to Israeli occupation. Meanwhile the economy of the West Bank and the PA itself remain completely dependent on foreign aid.

U.N. recognition of a Palestinian make-believe state would be no more meaningful than this fantasy “institution-building,” and could push Palestinians even further away from real liberation and self-determination.

Figures from the Ramallah-based PA have justified their U.N. recognition strategy as a way to bring international pressure to bear on Israel.

“Such recognition would create political and legal pressure on Israel to withdraw its forces from the land of another state that is recognized with the [1967] borders,” Ramallah foreign minister Riyad al-Malki told reporters in January.

Similarly, Nabil Shaath, a top Fatah official, explained to The New York Times that if a Palestinian state were recognized by the U.N.: “Israel would then be in daily violation of the rights of a fellow member state and diplomatic and legal consequences could follow, all of which would be painful for Israel.”

But can anyone who has seen how the “international community” functions when it comes to Israel believe such delusional expectations?

Lebanon has been a member state of the United Nations since 1945 and yet this did not prevent Israel from occupying southern Lebanon from 1978 until 2000. Israel’s occupation of Lebanon ended not because of any international pressure, but only because the Lebanese resistance drove Israel and its collaborating militias out.

Since its massive bombardment of Lebanon in 2006, Israel has violated Lebanon’s sovereignty thousands of times — according to the United Nations itself. But its constant overflights of Lebanese airspace and kidnapping of Lebanese citizens among other violations have never prompted “diplomatic and legal consequences” to hold Israel accountable.

Similarly, since 1967 Israel has occupied the Golan Heights, which belong to Syria (also a U.N. member since 1945). There has been virtually no armed resistance on the Golan Heights nor has there been any international pressure for Israel to withdraw or for Syrian refugees to be allowed to return to their homes.

Even after Israel illegally annexed the territory in 1981 — a move condemned by the U.N. Security Council — the international community’s silence has allowed Israel’s colonization of the Golan Heights to continue unabated.

Why would the situation in the “State of Palestine” be any different?

The effort to seek diplomatic recognition for an imaginary Palestinian state on a fraction of historic Palestine is a strategy of desperation from a Palestinian leadership that has run out of options, lost its legitimacy and become a serious obstacle in the way of Palestinians regaining their rights.

Relying heavily on diplomatic forums and the good will of the “international community” has also been tried before and produced no results. Recall that in 2004, the PA expended enormous efforts to obtain an advisory ruling from the International Court of Justice (ICJ) in The Hague that Israel’s apartheid wall in the West Bank is illegal and must be torn down.

But beyond obtaining the ruling, the PA had absolutely no strategy to mobilize Palestinians and their allies to pressure the world to actually implement the decision. It was a paper victory that resulted in no change on the ground.

Indeed, there is significant evidence that while the PA’s diplomatic corps and negotiators were busy in The Hague, the leadership sought to stifle attempts by Palestinian civil society organizations in the West Bank and East Jerusalem to organize around and bring attention to the ICJ ruling, almost certainly due to pressure by Israel and the United States.

Would the government of an “independent Palestine” still under Israeli occupation and reliant on aid from the United States and the European Union be able to stand similar pressure in the future? The PA’s record to date offers no basis for optimism.

In spite of these efforts, the ICJ opinion did have one important consequence. It was not the PA or the defunct Palestine Liberation Organization (PLO) that began to mobilize.

Rather, amid the inaction from world governments to enforce the ICJ ruling, Palestinian civil society independently issued the 2005 Palestinian Call for Boycott Divestment and Sanctions (BDS).

This campaign seeks to isolate Israel and pressure it to respect Palestinian rights and international law, through popular boycotts similar to those that helped end apartheid in South Africa.

Rather than fetishizing “statehood,” the BDS campaign focuses on rights and realities: it calls for an end to Israel’s occupation and colonization of all Arab lands conquered in 1967, full equality for Palestinian citizens of Israel, and respect for and implementation of the rights of Palestinian refugees. These demands are all fully consistent with the Universal Declaration of Human Rights and international law.

The PA has never endorsed this campaign, and in fact has sought to distract from and undermine it by calling only for a half-hearted boycott of Israeli settlement goods while actively promoting trade with Israel in violation of the BDS call.

Many have accurately likened the Palestinian “state” envisaged by the PA and its sponsors to the “bantustans” of apartheid South Africa.

The bantustans were nominally independent states set up by the apartheid regime to grant “citizenship” to blacks, as a way to derail demands for true equality.
World governments did not fall for the trick and refused to recognize the bantustans because they understood that diplomatic recognition for these entities would actually set back the struggle to end South African apartheid.

Not coincidentally, the only country to have had extensive dealings with the bantustans — allowing them to open diplomatic missions and frequently receiving their leaders — was Israel. Israel saw the bantustans as a model for how it would one day manage the Palestinians.

Recognition of a Palestinian “state” under Israeli occupation would certainly solidify and perpetuate the privileges and positions of unelected PA officials, while doing nothing to change the conditions or restore the rights of millions of Palestinians, not just in the territories occupied in the June 1967 war, but within Israel, and in the diaspora.

Far from increasing international pressure on Israel, it may even allow states that have utterly failed in their duty to hold Israel accountable to international law to wash their hands of the question of Palestine, under the mantra of “we recognized Palestine, what more do you want from us?”

Palestinians and their allies should not be distracted by this international theater of the absurd, but should focus on building wider and deeper BDS campaigns to end Israeli apartheid everywhere that it exists, once and for all.

Ali Abunimah is the co-founder of electronicintifada.net. An earlier version of this article appeared on english.aljazeera.net.