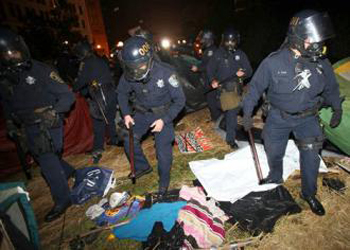 Later that day, about 1,000 people gathered at the Oakland Public Library and then marched up 14th Street, picking up larger numbers along the way, to the site of the encampment, Frank Ogawa Plaza, which the Occupy protesters had renamed in honor of police murder victim Oscar Grant. Police were out in full force again to stop anyone from entering the plaza. When demonstrators refused to follow police orders to disperse, the cops once again fired tear gas and flash grenades at the crowd.

As this story was being written, tear gas hung in the air in downtown Oakland, and demonstrators continued to face off against huge numbers of cops clad in riot gear.

Officers from more than a dozen separate police forces in the region participated in the dawn raid earlier in the day. It began without warning with a well-orchestrated encirclement of the protesters. Police stormed the camp, brandishing clubs–they overturned the encampments’ tents and rip up stalls that housed medical and food facilities.

For the last two weeks, Occupy Oakland has been camped at Oscar Grant Plaza. In addition to those who were part of the overnight encampment, many more convened in the city square for demonstrations and actions to protest social services cuts, the austerity agenda and Oakland’s long history of police brutality.

At first, city officials expressed support for the demonstration and claimed to sympathize with its grievances. On the first night, one city council member spent the night. Even Democratic Mayor Jean Quan visited the camp and was on the speakers’ list for a labor march planned for October 15.

The brutality of the police assault shocked many who witnessed it. “They destroyed the camp,” protester Stephanie Demos told a local news station. “They destroyed people’s personal property. They had no reason to do that.”

Around 6 a.m., said protester Pete Woiwode, “The police started pushing on us, grabbed six of my friends who had been peacefully standing there and chanting for a couple of hours, and threw them to the ground. Now they are being detained.”

Oakland has announced that the park will open again in a few days as a “free speech zone” during normal park hours–but that no one will be allowed to stay after 10 p.m. for the purpose of “camping.” But in the words of Mindy Stone, who was among those arrested; “I’m not camping, I’m demonstrating. What they’re doing today is disgraceful.”

CERTAINLY ONE reason for the city’s crackdown is that Occupy Oakland hasn’t shied away from expressing its criticisms of Mayor Quan and the city council’s agenda.

Quan has made concerted efforts to expand the city’s gang injunction powers, including youth curfews and anti-loitering laws that condone police harassment and arrests of youth of color. Occupy Oakland has voiced its condemnation of these policies and made efforts to organize protests to stop them.

The Oakland City Council has also been on a slash-and-burn austerity campaign. Quan has floated a plan to shut 14 of the city’s 18 public libraries–unless the librarians agree to pay their own medical insurance and renegotiate their contract so there can be more cuts.

Eight Oakland schools are on the chopping block, and 30 more could be closed down in the next three years. City workers have taken several furlough days, and they face higher contributions to their health and pension plans (the police department is, however, exempt from most of the concessions).

Occupy Oakland has attempted to develop ties with city workers and build solidarity with labor. Several unions have given their support, including the Oakland Education Associationthe International Longshore Workers Union and the University of California-Berkeley graduate employees’ branch of the United Auto Workers. Individual organizers from other unions, such as the Teamsters and UNITE HERE!, have also come to the encampment to give support.

Josie Camacho, a leader in the Alameda Labor Council, led a protest [the afternoon after the arrests] near police headquarters, condemning the camp’s shutdown as “an unprovoked raid on peaceful protesters” and demanding everyone arrested be immediately released.

Though she acknowledged that the camp was costing the city quite a bit of money, Camacho said the police shutdown was not how organized labor wants to see city money spent. “Maybe those funds could have been better spent trying to find placement for these people,” she said.

The old saying goes, “If you can’t beat them, join them,” but Mayor Quan and the city council have inverted it: If you can’t join them, beat them up–and throw them out of their encampment.

The hundreds of people who kept the Occupy Oakland encampment going–and the many hundreds more who mobilized to defend the camp against police attack–are showing what real democracy looks like, and it has nothing to do the officials running Oakland and ordering its police force to silence free speech.

This article was originally published by SocialistWorker.org