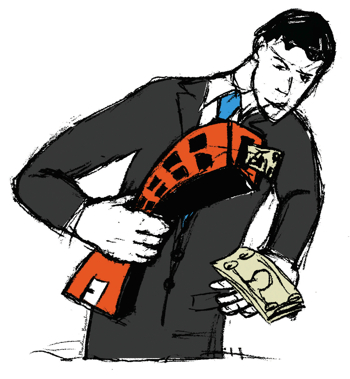 Almost half the rent-stabilized apartments in New York City may have illegally high rents, according to a study released in August by the housing activist group Make the Road New York.

The report, “Rent Fraud: Illegal Rent Increases and the Loss of Affordable Housing in New York City,” was based on a sample of 200 apartments in Brooklyn, Queens, Manhattan and the Bronx. The Bushwick-based organization found that 45 percent had illegally high rents registered with the state Division of Housing and Community Renewal (DHCR), and one-third had missing years in their rent history. (Owners of rent-stabilized apartments must register their rents every year.) Not surprisingly, 60 percent of the apartments with gaps in their rent history also had illegally high rents.

“It ranges from small inflated rents to horror stories,” says Hilary Klein, lead organizer at Make the Road. Some of the tenants the group spoke to were charged more than $10,000 in illegal increases, she says.

The number of apartments with fraudulent rents may be even higher, the report says, because in 12 percent of the units surveyed, “landlords failed to register any rents in recent years, making it impossible to determine the existence of rent fraud.” Also, it says, owners sometimes charge tenants more than the registered rent.

Housing advocates around the city say the report confirms what they’ve been seeing. “I’ve seen the same pattern for years and years,” says Ken Rosenfeld, head of the Northern Manhattan Improvement Corporation in Washington Heights. “I think this is just the tip of the iceberg.”

“There is a lot of fraud out there,” adds Ellen Davidson, an attorney in the Legal Aid Society’s housing-law reform unit.

Common practices the study found included landlords simply raising rents without any legal justification; failing to register the apartment’s rent; raising rents more than the 6 percent a year permitted for major capital improvements; and inflating the costs of apartment renovations.

Fraudulent increases were most likely on vacant apartments, it said. New tenants rarely know what the apartment used to rent for, explains Make the Road staff attorney Marika Dias. In one Flushing apartment without any renovations, the rent was raised from $909 a month to $1,700 — more than $500 over the legal increase — when a new tenant moved in in 2010.

The report harshly criticizes the Division of Housing and Community Renewal, the part of the state’s housing agency that oversees rents for the state’s 875,000 rent-stabilized apartments. The DHCR’s Office of Rent Administration handled fewer than 1,900 overcharge complaints in 2010, according to The New York Times. About 35 percent were settled in the tenant’s favor.

The biggest problem, the report and housing advocates say, is that the system is driven solely by tenant complaints, and the agency does not independently pursue possible fraud.

“Even when DHCR sees an outrageous overcharge, they never investigate the rest of the building,” says Ed Josephson, housing coordinator for Legal Services New York. “They see their mission as responding to tenant complaints.”

Many tenants do not even know that they can complain if they think their rent is illegally high, or they don’t know to go to DHCR. Others fear that their landlords will retaliate against them for filing a complaint. Official correspondence and signs in the agency’s office are only in English, and tenants who speak Spanish or other foreign languages can rarely reach staff on the phone, the report says. And processing overcharge complaints takes a minimum of one year, usually 18 months. It can sometimes take more than two years.

The DHCR’s press office did not return phone calls.

The study was primarily based on apartments in Brooklyn and Queens, chosen to reflect the city’s mix of building sizes. The buildings “were not selected because we suspected rental overcharges,” it says. Make the Road then went door to door to find tenants willing to seek out their rent histories and supplemented that information with rent histories obtained by other community groups elsewhere in the city.

Maria de los Santos of Bushwick found out that she had been charged $123 a month more than her legal rent for almost three years. The landlord did not register her apartment’s rent for the 12 years before she moved in, in 2005. It then retroactively registered a legal rent of $900 — but by 2007, de los Santos was paying $1,050. Though DHCR took more than a year to process her complaint, in March she won $3,444 reimbursement and more than $6,800 in damages.

Luis Pelaez of Jackson Heights, an Ecuadoran immigrant, was not so fortunate. He contacted Make the Road after he fell behind in his rent and got an eviction notice. His rent history revealed he had been overcharged more than $9,000 after his landlord illegally raised the rent from $1,139 to $1,550 in 2006. However, he ran afoul of the “four-year rule,” the provision in the 1997 rent laws that largely prevents tenants from contesting overcharges more than four years old.

“By the time I found out I was being overcharged, it had been more than four years and I couldn’t do anything about it,” Pelaez said at a demonstration in Jackson Heights last winter. “But now my landlord will probably get away with overcharging me for years and he will probably win his case against me in Housing Court. There’s nothing I can do about it, and it’s very unfair.”

“There’s a lot of leeway for landlords who choose to do illegal things,” says Marika Dias. “If they can get away with it for four years, they’re home free. The exceptions are very small.”

State courts have carved out some exceptions to the four-year rule, primarily when tenants have evidence that an apartment was fraudulently deregulated. However, the issues remain murky, and the exceptions do not apply to apartments that are still rent-stabilized.

Robert McCreanor of the Catholic Migration Office’s Immigrant Tenant Advocacy Project in Sunnyside, Queens sees different patterns of rent fraud. Small landlords, he says, are more likely to do “really egregious” things, such as simply raising the rent by $200 every year. The bigger ones, such as the predatory-equity firms Pinnacle and Vantage, are more sophisticated, relying on inflating the costs of renovations.

“The larger and more professional the real-estate company, the less likely they are to just jack up the rents without doing something to cover their tracks,” says Ed Josephson. “We’ve seen buildings where they use the same receipts and the same checks for ten different apartments. It’s frequent that you see phony documents after you file an overcharge complaint.”

The Make the Road study did not include illegally deregulated apartments, although housing advocates say that fraud is especially rampant there. This kind of fraud — which particularly affects younger renters — is most difficult to track down, says Mario Mazzoni of the Metropolitan Council on Housing. Owners are not required to register rents once an apartment is deregulated, he explains, and, as tenants have no right to renew their leases, the landlord can easily retaliate if the tenant files an overcharge complaint.