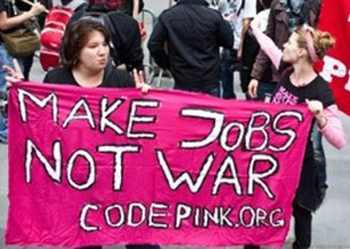 If Week 1 of Occupy Wall Street was about surviving, Week 2 was about finding our voices. This protest is about the 99 percent of people in America who have been on the short end of the economic stick, but it appears the media believes it’s 90 percent made up of men. Some of the organizing and facilitation processes we’ve developed to make our movement inclusive and participatory have proven not to be enough, and we are constantly adapting and regrouping to ensure that everyone’s voice in this broad and vibrant coalition is heard.

During Monday’s General Assembly I announced through the call-and-response system of people’s microphone that CodePink’s Medea Benjamin would be leading a media training session for women and gender queer/non-male identifying members of the demonstration.

Here’s what I said–and what they responded (this is how we as protesters can get on the same page):

The message was received enthusiastically. When we did our introductions in the training, we realized many people are not only finding it difficult to speak to press but also during the General Assembly (GA). CodePink members following from across the country via livestream have expressed similar concern that women’s participation in the GA seems limited to logistical report-backs from working groups that run the encampment at Liberty Plaza rather than more weighty discussions about our principles of solidarity and declaration. As these important discussions have intensified, so have women’s insistence on meaningful inclusion and representation in the drafting of our “living documents.”

During the training Medea Benjamin offered some suggestions on how to make sure everyone’s voices are heard. We tell her about the speak-easy caucus of the General Assembly, which is a safe space for women and non-male identifying members of the GA. That evening a new group, the “Safer Spaces” Committee, announced, call-and-response, its formation to address the problem of sexual harassment:

When we got to the practice portion of the training, my partner, Anna, was shy and said she didn’t want to try it. I asked her why she’s here. She froze up. I told her to imagine she’s on the phone with her best friend, someone close to her, who’s wondering what all this is about. Without so much as a pause or an “um,” Anna told me she was here because she’s been unemployed for two years and she’s tired of seeing media blaming young people for being jobless. We immediately brought the livestream camera over to record her story, and those of the other people in the group, which are more compelling and personal than any I’ve heard covered thus far.

Since the demonstration began two weeks ago, I’ve been coordinating with members of CodePink, the Granny Peace Brigade, and the Speak-Easy Caucus looking to take the demonstration to the “next level” by staying overnight, and wanting to generate a critical mass of trusted friends to create a safe encampment for the night. On Friday we gear up for our first Occupy Wall Street sleep-out. After last Friday’s was rained out, this time we are ready. At least most of us are — I still don’t have a sleeping bag.

I receive an email from Eve Ensler — she wants to pay a visit and is wondering if there’s anything we need that she can bring. Problem solved. I notify one of the founding members of the Speak-Easy caucus. Her eyes well up. “Omigosh! Are you serious? Here? When?” She tells me about how her closest group of friends formed around a high school production of The Vagina Monologues and still lovingly refer to each other as “the Vaginas.” When Ensler arrives, she tells her “I wouldn’t be here if it weren’t for you.”

Eve and Alicia (one of the V-girls) arrive at the encampment with bags of supplies, including a wonderful sleeping bag that I gratefully accept. Ensler tours the grounds, interviewing people, and says she will return tomorrow night with the rest of the V-girls. For now, she just wants to take it all in. Her face glows with awe, praise and curiosity: “A second wind is coming.”

CodePinkers came and went from the square throughout the day and gathered for the march against police brutality at 5:30. After the march more members stopped by to offer support and delicious home-baked chocolate chip cookies. As night fell, I went to the nearby fast-food restaurant that has become our bathroom. It was packed with young women from Occupy Wall Street. One (Nicole, 20) watched me take out my toothbrush and nodded knowingly. I asked her how long she’s been staying in the square. She said since last Saturday. She told me she didn’t planning on staying, just came down one day to check out the scene, met some cool people, and didn’t want to leave. “You can’t capture that on camera, that sense of community. I’ve never felt so close to the people around me.”

A woman I recognized from the encampment’s medic committee reminded us that our cell phones will be the first thing taken by the police and instructs us to take down the National Lawyers’ Guild number in case of emergency. We obediently pen the number on our forearms in pink Sharpie and wish each other luck.

As I consult with the Safer Spaces committee — identifiable by their pink armbands — where to set up camp, it begins to rain. I run over to where the General Assembly is meeting and duck under a big red umbrella with Sara Beth, a member of the speak-easy caucus. We reminisce over how the umbrella originally brought us together in a moment that seems years ago but was probably last week, when I asked to trade my red umbrella for her pink one. The rain gets harder and louder. A young woman in a poncho tours the square with a cardboard sign shouting like a newsboy: “FREE HUGS!” People huddle under tarps and shout jokes across the square to keep spirits up: “Two fish are swimming in a river. One slams into a concrete wall. Dam!”

I ask Sara Beth what she wants to do if the rain continues. We decide to stick it out. I duck from tarp to tarp trying to cover my belongings and rally together other speak-easies. Eventually we seek refuge in the WikiLeaks truck, owned by fellow Bradley Manning supporter Clark Stoeckley. Referring to our Occupy Wall Street-induced evolution from Twitter-following to friendship, I joke that I’ll thank the bejeesus out of him on Twitter.

There’s about seven people in the van already, only one of whom is a woman. They welcome us in joking that it’ll make her feel better. This is not exactly the “safe-space” we were envisioning, but it is warm, cozy, and most importantly, dry. Someone pokes her head in asking if anyone would like a pair of clean, dry socks. A few of us hold back out of politeness before accepting. Wiggling our toes with glee in the too-large white tennis socks, we all agree: they are the best socks we have ever worn in our lives.

Around 11pm I receive a text from my husband asking where I am. I reply, “Still in Liberty,” expecting him to text back that I should come home because it’s pouring. Instead, he arrives about half an hour later with a huge Tupperware container of freshly baked brownies. More people stop by the truck as the night progresses, including members of the Security Committee, who leave us with one of their yellow walkie-talkies in case we should need them. Like many of the committees, they mention they are looking for more women members.

People returning from bathroom runs report back: “We have occupied McDonalds!” “They’re singing ‘This little light of mine.'” And, eventually “We have been evicted! Need to find a new bathroom!” We keep a running tally of the number of people in the truck, joking that we should adapt the restaurant’s slogan: 17 served. Everything is funny to us. One of the served says he wants to make a big sign that says, “For the first time in my life I finally feel at home.”

At 5am I return to the 24-hour fast food bathroom. It is as hot as a sauna, and we pack in, taking turns using the hand drier. Some are changing, some cutting each other’s hair, some just sitting on the floor to get some warmth into their soaked bones. People tell each other they’re beautiful, reunite, hug, and compare horror stories of the rough night we just survived. One woman jokes that tonight we should all just sleep here in the bathroom where it’s safe and dry. “Let the guys figure out their own thing.”

Melanie Butler is a member of CodePink’s national staff.

This article was originally published by Alternet.org