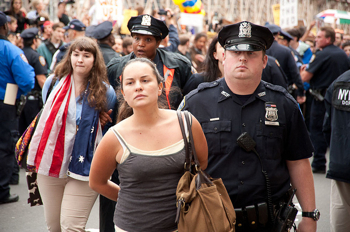 The entrapment and arrest of 700 peaceful Occupy Wall Street (OWS) activists on the Brooklyn Bridge has created a huge wave of support for their movement. The number of daytime occupants in Liberty Plaza doubled or tripled from 100 the week prior to 200-300 this past Monday and Tuesday. These people are the core who maintain the occupation of the plaza, making it possible for several hundreds and sometimes thousands to hold rallies in the late afternoon and participate in the open mic speakouts and General Assembly meetings in the evening.

The mood of the crowd is defiant and determined. Quite a few people were still unsure of how exactly they had been trapped by the NYPD, but that did not matter.

What mattered was that OWS made front page news in papers around the world along with its official list of grievances, undercutting naysayers who pretended it was a bunch of ignorant jobless kids without a clue as to what they want.

What mattered was that Transit Workers Union Local 100 backed up Friday’s solidarity speeches with action by filing an injunction against the city for ordering their drivers to bus arrested protesters to jail. The drivers cooperated with the orders, but only because armed high-ranking NYPD officers told them to do so. Who can blame the drivers? You never know which one of them might be the next Anthony Bologna.

On Tuesday, a brave soul named Steve from the 1 percent came to talk to the people in the park. He claimed to work for a nearby investment firm, and he certainly dressed, spoke, and acted the part. Many of the activists questioned him and tried to debate him, but he gave them mostly suave evasions, which generated a lot of frustration among the crowd of 5-10 that gathered around him.

A white Viet Nam veteran and hospice nurse (I never saw an old woman with a purple heart until today) asked Steve why should Medicare or Social Security be privatized using a voucher system? Why should the elderly and sick be forced to do with less during these hard times? Steve replied that he does not support these moves and believed in a “strong social safety net” (a direct quote). Next, a middle-aged black guy named Keith Thomas (who later turned out to be a transit worker injured on the job) asked Steve whether or not Wall Street firms had any type of moral obligation to their employees. (Thomas was laid off from a Wall Street firm prior to his job in the transit system.) Steve agreed they have a moral obligation, but added that no entity, whether it was a corporation or government, had obligations that were set in stone.

When I heard this, I could not keep my mouth shut anymore and interjected, “so what about Medicare and Social Security? Those are obligations, right? And you said you supported them.” I pointed out that “too big to fail” banks enjoy a government guarantee that they would get bailed out again as in 2008. Not surprisingly, Steve did not take well to my line of questioning and left shortly there after. The crowd thanked him for having the dialogue, as did I, and we asked him to come again.

I doubt he will.

In the course of the exchange, a number of things became clear.

First, Wall Street and Corporate America will try to deflect responsibility for what OWS is upset about in the hopes that it falls for the Tea Party mantra that “government is the problem.” When Steve said we should be protesting in Washington, D.C., demonstrators said Wall Street owns the government; some even went so far to say that Wall Street is the government.

Second, OWS has become what can only be described as a people’s movement. When you go into the park, it really is the 99% that you find there. Thomas later told me he felt like this was “just like 1968.” He said it evoked feelings in him he had not felt for a long time.

There is a feeling of empowerment, like justice is on our side, of good will, and of seriousness of purpose in the air there that is very difficult to capture with mere words. Even pictures and video footage, worth many millions of words, cannot convey it.

You have to come to Liberty Park to experience it. And once you experience it, you cannot stop the inner urge you feel to fight and win, against all odds. It is this feeling that is propelling the movement into the most unlikely of places, like Mobile, Alabama.

I am not old enough to remember 1968, but I imagine this is what it was like.

The occupation in the last few days has become much more multiracial than in the first and second weeks. I saw aging Viet Nam veterans (some of them homeless), union workers, high schoolers, journalists from the corporate media, Laura Flanders, Michael Moore, Hispanic and African immigrants, low-wage workers who work nearby, retirees, disabled people, and college students.

The class and racial breakdown of the occupants looks much more like that of a rush hour subway car in midtown Manhattan than an alternative music concert as it did previously.

If you hear otherwise, you are hearing lies.

The only people missing are the the Steves of the city, the 1%. They are asking their friends in the corporate media, “is this Occupy Wall Street thing a big deal? … Is this going to turn into a personal safety problem?”

Wall Street is worried about what this means.

And they are right to be. We are onto them.

The occupy movement is growing roots into all communities among all age groups and races. Everyone is bringing their issue to the table and receiving nothing but 100% support. There is not a progressive cause OWS will not get behind, nor an injustice that it will not try to address in some way.

Union members from New York City’s largest municipal workers union, DC37, held a rally at OWS on Monday, as did the Teamsters who have been locked out by 1% auction dealer Sotheby’s for months. There were quite a few members of the United Federation of Teachers (UFT) there as well (their headquarters is two blocks away).

All of the middle-aged union members I saw were grinning from ear to ear, cheered by the defiant and militant spirit that was once the calling card of the American labor movement. Speaking of which, I ran into a young man at the Monday occupation who said he was a descendant of the Molly Maguires. I never expected to hear that name at a protest in this day and age (they were framed and executed in the 1870s using the same methods the state of Georgia used to kill Troy Davis because they sought to organize Irish immigrant workers in Pennsylvania’s coal fields).

This young man, Mark Purcell, traveled from central Pennsylvania to OWS and said he planned to get involved in whatever occupation happens in Philadelphia. Mark told me he realized the system was totally corrupt when he worked at an Allentown warehouse as a temporary worker. He said the companies took advantage of undocumented immigrants since they have no legal rights or protections. The minute he complained about working conditions, the company he worked for told him to talk to the temp agency that was technically his employer, and the temp agency fired him. He was pissed that companies outsource labor to these agencies and use that to dodge responsibility for working conditions. “It’s bullshit,” he said.

The spirit of the Molly Maguires lives on at OWS. On October 5, National Nurses United, 1199SEIU, SEIU Local 32BJ, the New York AFL-CIO, UFT, Communications Workers, Professional Staff Congress-CUNY, the NY Central Labor Council are all mobilizing to rally and march to join OWS. And they have permits.

In addition to the alphabet soup of unions mobilizing, student activists are organizing walkouts from Hunter College, the New School (where professors issued a statement supporting their students’ walkout), and even New York University. Even the children of the 1% support OWS.

The last time the unions mobilized was back in May, when the UFT brought out over 10,000 during its contract negotiations with Mayor Bloomberg. The proceedings were tightly controlled and the messages carefully managed from above by union leaders.

This time, things will be different. The turnout will surprise everyone, and the message will not be handed down to the city’s workers and students from on high. “Students and labor can shut the city down,” we shouted at Friday’s rallies against police brutality.

Perhaps we were prescient.

Pham Binh’s articles have been published by Asia Times Online, Znet, Counterpunch, and The Indypendent. All of his writings on Occupy Wall Street and other topics can be found at www.planetanarchy.net