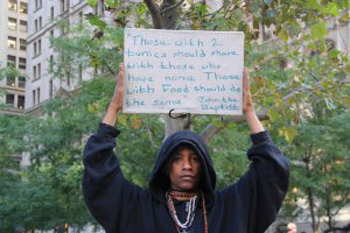 Will Occupy Wall Street hold together long enough to cut to the deep chase?

Will it find a voice to articulate not merely the pain of the struggling middle class but the endemic unfairness and racism of inescapable poverty? “Everyone is important,” read the sign of an elderly protester. My God, what if it were true? What if we could see, in the desperate thrashing of the abandoned class, everyone’s future, that of the 99 percent and that of the 1 percent?

Let the Occupy movement become such a merging of voices that it reaches and changes the rigged game of American democracy and puts the collective failure of the system, in all its manifestations — from environmental collapse to our doomed wars and the hubris of empire to the violence in our streets — at the forefront of our media and our consciousness. Let the movement be the first tremor of a new awareness that dehumanizes no one.

This awareness has been under construction for a long time. My guess is that I’m not the only one who keeps coming across ideas and idealists who seem to be part of the movement even if their focus is solely on a small, particular corner of the world they have devoted their lives to changing, and ostensibly has nothing to do with Wall Street or politics. Could it be that our solutions are converging?

For instance, I recently attended part of the 25th anniversary celebration of the Christian Peacemaker Teams in Chicago. One of the speakers, Elce Redmond, an activist in the city’s South Austin neighborhood, talked about efforts he helped organize to calm down the gang violence at several local schools. The resident-peacemakers did not show up at the schools as some ad hoc security force, to stand in us-vs.-them solidarity against neighborhood teenagers, but as violence interrupters, a la CeaseFire, actively engaging the young people in conversations and bringing a calming consciousness into volatile situations.

“Many of the young people didn’t want to fight, but felt it was the only way to resolve conflict,” Redmond said. “We had conflict resolution classes in the high school. We decided to build youth peace brigade.”

But it was one particular story he told — of a brief, emotion-charged encounter with a young boy at the local elementary school, then with his mother — that caused me to draw a connection with the Occupy Wall Street protests around the country and the American and global financial predators their presence is challenging.

The boy was about to cross a street near the school in the middle of the block, Redmond said. When he told the boy he should cross at the crosswalk, for safety’s sake, the boy became furious and cursed him out. Then the boy went home and came back with his mother, who also loosed a barrage of profanity at Redmond, whose only interest had been keeping her son safe. He said nothing as she swore at him, except to tell her not to talk like that in front of a child. She went back home.

That’s not quite the end of the story. Sometime later, Redmond said, he saw the mom again, and this time she apologized to him, explaining that on the day she’d blown up at him she’d been going through an eviction and facing utility shutoffs. She’d been beside herself with worry and had lost her ability to cope except by lashing out.

My thought, as I heard this story, was that we should stop disseminating statistics about how many Americans are “living in poverty,” as though poverty were a solid state of reduced circumstances rather than a continual daily struggle to maintain rudimentary survival, kind of like living in quicksand.

In other words, “poverty” means terminal instability, and to be cursed with it — to be a member of the abandoned class — means that you have little chance to imagine, let alone plan for, a stable future for yourself or your children; and furthermore, such instability is contagious. People’s emotions are continually on a hair-trigger. Large numbers of desperate people destabilize neighborhoods and radiate fear into the gated communities of the comfortable. We can’t live like this. None of us can.

“While many of the old centers of inequality in Latin America, such as Brazil, have been striving in recent years, rather successfully, to improve the plight of the poor and reduce gaps in income, America has allowed inequality to grow,” economist Joseph Stiglitz wrote in May, in a prescient article for Vanity Fair called “Of the 1%, by the 1%, for the 1%.”

He added, citing Alexis de Tocqueville’s insight: “Everyone possesses self-interest in a narrow sense: I want what’s good for me right now! Self-interest ‘properly understood’ is different. It means appreciating that paying attention to everyone else’s self-interest — in other words, the common welfare — is in fact a precondition for one’s own ultimate well-being.”

The common good and common sense have been sacrificed on the altar of corporate profit over the past three decades. At last this process has hit a counterforce, as more and more people reoccupy the public domain and demand a shift in national direction. For now, we all belong to the abandoned class.

This article first appeared on CommonDreams.