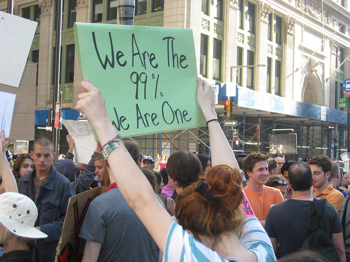 On a recent afternoon, Liberty Plaza was boisterous with drums, conversation, and the ubiquitous People’s Mic. Immediately I met CJ Phillips, who was pushing a cart adorned with cardboard signs detailing his homelessness. When I asked to speak with him, he handed me a three-page document outlining who he was and how he had been mistreated by government services and corrupt private enterprises. As a story of a person’s frustrated attempts for help from the health care and social services systems in the United States, it is familiar.

CJ’s story is that he is a homeless unemployed actor who suffers from various illnesses and has lost everything that he owns. Twice.

He believes that Occupy Wall Street is about two issues: “governmental accountability” to the population, and more money for America,” specifically money for the homeless. As CJ illustrates, OWS participants are disparate in their concerns. A flyer announcing an Oct. 22 protest against police brutality is taped to a tree nearby. A young woman stares at the line of police on the sidewalk, holding her sign by the stick it’s taped to, her somber face as bleak as her written message: “What Future?”

Another sign leaning against a tree reads, “Dude, Where’s My Middle Class?” Another, “The first time I served my country I was a paratrooper — this time I am a revolutionary.” One sign taped up near the People’s Library reads, “Human Rights Are For Living Persons — Not Corporations.”

The growing occupation movement is as described and chanted: the 99%. The people in the movement are outraged at the immense inequality of wealth and power in the country, and the injustice and suffering it causes — and they are demanding change.

In the library’s corner of Liberty Plaza, where they have everything from books by Marx, Zinn and Dickens to “Murder Novels,” a poetry reading was about to happen.

Holding the sign broadcasting the event is Rafiq Aachwari, 62, who was born in Kashmir and has been living in the United States for four decades. Rafiq has been to OWS at least a half-dozen times, and says he comes because he “believes that an earthquake starts with a tremor. I believe we need to raise our voices and take our country back.”

Rafiq is a poet, an essayist, a former businessman and artisan. “A person who would help artisans and empower artisans in the Himalayas,” he says, by purchasing handmade goods that were then sold in the West.

He offers solutions with brevity. “First priority should be education. Second, healthcare. The defense budget is unconscionable.” He hopes that the people’s voices will be heard, and suggests regulation of financial institutions and reinstatement of the Glass-Steagall Act.

While stressing that he does not want to be a victim, Rafiq says that predatory lenders coaxed him into mortgaging his apartment, which he eventually lost, having to declare bankruptcy. “I have nothing to lose,” he says. “I am starting all over again.”

At the poetry reading, each poet has three minutes, and can choose to shout or to use the People’s Mic. Names are drawn from a box. Rafiq uses the People’s Mic to read a poem he translated from Urdu, by the poet Faiz Ahmad Faiz.

“This poem,” he says in introduction, “written in 1979 in San Francisco, foresees the Arab Spring and, by extension, Occupy Wall Street. So listen up.” The poem ends in the unity of the 99%, with a slight change by Rafiq from the original:

We the pure and the rejected
Standing in Liberty Square
Our hands
blossoming into fists
Will rend the sky with a cry
I am truth
Which is you as well as I
And the beloved of earth will reign
You
I
We
Us.

While the poetry reading continues, underneath the corporate art known as “The Weird Red Thing” a woman playing a violin and a man with an acoustic guitar play some instrumental songs until arriving, via audience suggestion, at drinking songs like “Whiskey in the Jar” and even “Seven Nights Drunk.” Several gentlemen — young and old — get down in the dance circle as the audience keeps time with handclaps.

Ninety nine percenters in over 1,500 U.S. towns and cities are occupying or planning occupations of their own, in solidarity with OWS. The movement has been endorsed by Bernie Sanders, the Working Families Party, Moveon.org, AFL-CIO, SEIU 199, the United Federation of Teachers, faculty of Columbia, the New School, NYU and even Ben and Jerry’s.

It’s beginning to make me hum some bars from “Alice’s Restaurant”:

“And can you, can you imagine fifty people a day,I said fifty people a day walking in singin’ a bar of Alice’s Restaurant and walking out. And friends they may thinks it’s a movement…and all you got to do to join is sing it the next time it comes around on the guitar.”