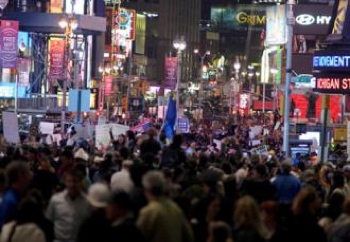 The day after winning a stunning victory against Mayor Michael Bloomberg’s attempt to evict its encampment in the financial district, the Occupy Wall Street protest movement achieved a new highlight with a massive mobilization of up to 100,000 people in Times Square.

The protest was part of an October 15 day of action that saw the Occupy movement spread around the world. In the heart of Manhattan, on Broadway and 7th Avenue, from 42nd to 50th Streets, people crowded in to fill every inch of available space–pushing east and west to fill the side streets as well.

The October 15 didn’t have an official permit, but the police were completely incapable of stemming the tide of tens of thousands of people flowing into the square–despite an overwhelming presence.

The demonstration in Times Square was the high point of a day that was marked by an impressive level of self-mobilization and initiative.

By late morning, Zuccotti Park–the site of the Occupy encampment a few streets from Wall Street that was established on September 17–had already filled with people. Many were New Yorkers who had heard about the previous day’s defense of the renamed Liberty Plaza, and had come to celebrate and learn more. Others came from out of town–traveling from as far as South Carolina and Washington state–to be part of the new movement.

What everyone shared the sense that our side was finally speaking up, and it was time to get involved.

Occupy’s Labor Outreach Committee had called for a labor march at 11 a.m. to protest the banks and demand jobs and an end to corporate greed. Though the march started with only a few hundred people, it grew to several thousands as it wound its way through downtown Manhattan, stopping at several banks before heading north to Washington Square Park. As one sign held by an 8-year-old read, “Just because it’s legal doesn’t mean it’s right.”

“The march confirmed the importance of solidarity,” said one teacher, describing the mood. “It felt unified. It was important that we knew it was happening all over the world, that the whole world was watching.”

At noon, the United National Anti-War Committee (UNAC), a U.S.-wide antiwar coalition, had called a demonstration titled “Wall Street = War Street” to mark the 10th anniversary of the war in Afghanistan. Like the labor march, it started small, with just a couple hundred people, but it swelled to 1,000 as it marched past Zuccotti Park. Though originally bound for the Chambers Street military recruiting station, demonstrators shifted course and followed the labor march north toward Washington Square Park.

Meanwhile, several hundred students were organizing a General Assembly in Washington Square Park. Wearing badges that read, “My name is ____ and I have $____ in student debt,” students from campuses across the city addressed the crowd.

While staggering levels of student debt was a dominant issue, people also spoke to the range of issues affecting students. A first-year student at Eugene Lang College talked about his experience as a young Black man being stopped and frisked and harassed by the police. He encouraged people to join the people of color working group to continue to do outreach to those directly impacted by racism. A graduate student from NYU talked about the campaign to build solidarity with locked-out Teamsters at the Sotheby’s art auction house.

At both parks, the sense of solidarity and empowerment was palpable. Many participants had heard the criticisms of the Occupy movement, considered them, but developed their own response.

For example, one early claim about the New York occupation was that it was not working-class or multi-racial enough. But rather than allowing the media use that to dismiss the movement, people from all over the city are organizing those around them to make sure their voice is part of this movement. One sign carried by a protester at Zuccotti Park spoke volumes: “I am not a hippy. I have three jobs. And I’m still broke.”

Rank-and-file union activists set up a table at the Washington Square Park and collected hundreds of names of union members who want to help build the labor presence within the movement. Similarly, people of color and people in the largely working-class and multi-racial boroughs of New York City have begun organizing within those communities.

One contingent on Saturday, calling itself “Occupy the Bronx,” met in the borough to go down to the day’s events together. Though the crowd was small, about 100 people, it was eagerly received, and participants vowed to link the issues facing people in the Bronx with this growing movement. Similar efforts to build community-based occupation groups are underway in Brooklyn and Queens as well.

All of these organizing efforts could be felt in as the crowds in Washington Square Park grew throughout the day. By the time the labor and antiwar marches arrived in the late afternoon, the atmosphere was electric.

New working groups quickly formed and began meeting in different corners of the park. Parents with young children found each other and began talking about the reasons they had come out despite concerns about the aggressive police tactics in previous weeks.

Everywhere, people were standing in small groups, talking and learning each other’s stories. If you asked someone why they were there, the common response was: “How much time do you have?” One young child carrying a sign reading “Money for schools, not for war” had this to say: “My dad says they are killing too many people for no reason.”

By the time protesters began leaving Washington Square Park for Times Square–with several thousand taking over the streets to march uptown–it was clear that Times Square demonstration would exceed expectations. But no one could possibly have predicted the massive turnout for a demonstration that never even had a printed flyer.

This was an un-permitted action in the heart of New York City’s tourism district, and no one knew quite what to expect. Organizers were certain that there would at least be several thousand demonstrators–but the New York Police Department had proved in recent weeks that it would carry out mass arrests and unleash violence on even relatively large crowds.

But as tens of thousands of people converged on the square, it became clear that the balance of power–at least for the moment–had shifted. There were police on mounted horses and in riot gear near the top of the square, and groups of officers surrounded the entire area.

Yet protesters instinctively understood that the numbers massed together represented a powerful show of strength. Throughout the evening, the chant “they can’t arrest us all” continued to be raised in the crowd.

This confidence was fed by the growing awareness that the movement in New York City had become part of an international movement. Whenever one of the news tickers on a nearby building scrolled, “Occupy Wall Street goes worldwide,” the crowd repeatedly erupted in cheers.

One young man expressed the defiant yet jubilant mood: “I’m angry, but also extremely happy…Some people think this is all for nothing…What they don’t realize is that this is the biggest movement in human history. There are protests today in over 1,300 cities around the world…We are the entire world! We shall overcome!”

Of the tens of thousands of people who descended on Times Square, most were new to political activism. They were driven by a deep sense that something had gone fundamentally wrong, and that the “1 percent” targeted by the Occupy protesters was destroying our world.

But many have not yet been exposed to different social movements or political alternatives. For them, the convergence in the square was an opportunity to exchange stories and learn new ideas. Veteran activists used the people’s mic to teach people chants from the antiwar, anti-police brutality and other movements.

There was no sound system and no organized speakers. But people were eager to make their voices heard. In one section of the square, members of the International Socialist Organization turned a large planter into an impromptu stage for a people’s mic. For more than two hours, a line of participants waited to talk about why they had come to Times Square, what they were angry about, and what they believed needed to–and could–change.

Many of the participants told stories of the economic destruction in their lives–like 22-year-old Tara, who said: I’ve been on job interviews with hedge-fund firms on Wall Street where I have been asked instead for sexual favors. I’m $50,000 in debt and I’m unemployed, and to our leaders, I am not a person. We are important, we deserve jobs, we can make a difference…We are the 99 percent!”

Sandy said he had turned 67 years old yesterday. “I’m on Social Security and Medicare and food stamps, and they want to take it away from me,” he said. “It’s my money! I gave it to them, and I want it back!”

At a certain point, the people’s microphone–where activists repeat the words of speakers in waves so they can be heard in a crowd of thousands–reached six layers back. This meant speakers had to wait for what they said to be repeated six times, to ever-larger numbers, before continuing.

But people whose voices had been suppressed for so long had to struggle to wait for their words to be carried out to the crowd. One woman, Johanna, shook with rage as she told her story:

Other participants gave voice to the sense of idealism and hope that is fueling this movement. One young woman told the crowd, “My father told me not to protest Wall Street because our stock in AT&T is the reason I can go to college. I told him that’s why I’m going to protest! Because that’s not fair. I believe that everyone should have the right to an education, no matter what their means…I’m mad as hell, and I’m not going to take it anymore!”

Another woman was even more direct, “I’m here because my soul wouldn’t let me be anywhere else, and I can’t sit back and let the bullshit continue.”

The movement started by Occupy Wall Street has grown with dizzying speed and expanded its scope immensely in just four short weeks. The enormous response to the October 15 day of action shows the potential for a multiracial, working-class struggle. In New York City, activists are discussing plans for continuing to reach out to labor and students–and for spreading the occupation movement to communities across the city.

There are thousands of people who are eager to respond to that call. With the globalization of this movement, and the entry of masses of people into it, we have entered a new phase of the struggle.

This article was originally published by SocialistWorker.org