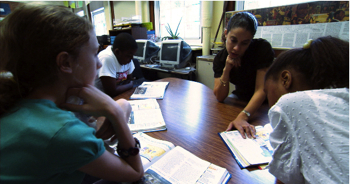 It seems that filmmaker Vanessa Roth and producers Dave Eggers and Ninive Calegari had a very specific audience in mind for their documentary American Teacher: those “rational” people who actually think that teachers are overpaid. Given the popularity of the 2010 film Waiting for ‘Superman,’ which championed the charter school model as the paragon of educational reform and laid much of the blame for problems squarely on teachers and their unions, the prospect that there are a lot of minds that need changing is worth considering. A production of the nonprofit Teacher’s Salary Project, which itself resulted from the (ironically titled) 2005 book Teachers Have It Easy: The Big Sacrifices and Small Salaries of America’s Teachers, American Teacher excels in illustrating the daunting challenges and, frankly, insulting remuneration to which teachers are subjected by following the lives and financial plights of four passionate educators. Sprinkled amongst these stories are the requisite advocacy film shots of talking heads who testify to the sad treatment of teachers, and the resulting ill effects that salary decline has on the educational system.

In its most compelling moments, the film serves as a window into the financial stresses of some talented teachers. Erik Benner, a teacher working in rural Texas, flirts with financial ruin while holding down a second job at a local Home Depot in an attempt to provide his family with the trappings of a middle-class lifestyle. We watch Brooklyn elementary school teacher Jamie Fidler, having burned through her six-week maternity leave following the birth of her first child, embark on an epic odyssey during a planning period to find a schoolroom in which she can use her breast pump in private. Jonathan Dearman flees the teaching profession completely in favor of a job working as a real estate broker in San Francisco, where he easily pulls down a salary that is many times more than what he earned as an educator.

Unfortunately, American Teacher gets bogged down in hammering home the one-note argument that teachers are underpaid — devoting almost three-quarters of its screen time to this thesis — and pays scant attention to possible solutions to the problem. The filmmakers allude to the idea that the scheduled retirement of about half of the country’s teachers over the next ten years will provide the perfect setting for wholesale teacher salary reform, but stop short of spelling out how. The film also glosses over schools that are promoted as potential reform models, such as the Teacher Equity Project (TEP), a charter school operating in the Washington Heights neighborhood of New York City. On its website, the TEP claims to have fashioned a financial model the provides teachers with annual salaries of $125,000 while relying “almost exclusively on the public funding it receives as a New York City Charter School.”

But for whatever reason, the film leaves both the assertion and the school largely unexamined. The film also leaves one wondering what effect these proposed salary changes would have on teachers’ unions.

While American Teacher gamely rises to the defense of educators, it is weakened by its reluctance to levy criticism at any specific quarter. The put-upon teachers are deservedly heralded by students, parents, administrators and each other, left unsaid is who exactly is to blame for the declining state of the public education system.