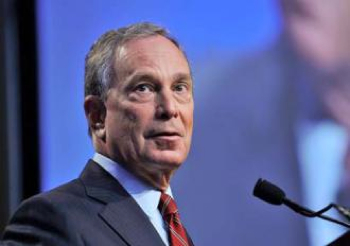 The Occupy Wall Street movement has put New York City Mayor Michael Bloomberg (net worth: $19.5 billion) in a bit of a pickle.

Being both the city’s mayor and its richest person makes him a poster child for the tyranny of the One Percent. Actually, as the 12th richest person in America, Bloomberg is technically part of the 0.0000001 Percent, but that’s hard to put into a chant. When this guy hangs out with the One Percent, he’s practically slumming.

So naturally, the mayor isn’t at his best when he tries to go populist, as he did on his radio show last week. But still, he ought to have been able to come up with something better than claiming, “The protesters are protesting against people who make $40,000, $50,000 year and are struggling to make ends meet.”

And to think that there’s been so much talk about this movement not having clear demands. How did we all miss the “No more jobs!” chants and the signs denouncing the $20-an-hour plutocracy?

Bloomberg went on to say that those folks struggle on $40,000 and $50,000 a year “are the people that work on Wall Street and in the finance sector”–although the transcript doesn’t note if he waited until completing that sentence before bursting into laughter.

But the mayor isn’t the only one having a hard time finding an effective way to slam the protests.

Rush Limbaugh denounced the protests as “99 percent white kids”–which isn’t true, but I like the idea that he would be down with the struggle if only there were more brothers in the park. I think if Occupy Wall Street were 99 percent Black and Brown kids, Rush Limbaugh would be calling for air strikes.

Then there’s Herman Cain, the Republican presidential hopeful who has shot up the polls with his plainspoken tough talk. “Don’t blame Wall Street, don’t blame the big banks,” he declared. “If you don’t have a job and you’re not rich, blame yourself!” Can’t you just picture the campaign buttons? “Blame Yourself! Cain in 2012”

THE IDEOLOGICAL defenders of the One Percent are scrambling because they’ve got nothing (because they have everything.) The Occupy movement is like a little boy shouting, “The emperor has taken all of our clothes!” And finally, everybody in America is talking openly about it.

The Tea Party was primarily a public relations operation. Last year, for example, dozens of media outlets breathlessly covered a Tea Party “convention” that had about 600 people. By point of comparison, next month, many more people will attend conferences across the country about Marxism sponsored by the International Socialist Organization. If I set the over/under on corporate media reporters at one half, would anybody take the over?

So it’s funny to see Tea Party “strategist” Sal Russo complaining that Occupy Wall Street is getting too much media coverage.

Here’s one of the many differences between the Tea Party and the Occupy movement. While there are hundreds of people at Liberty Plaza meeting every day to discuss strategy, I’ve not heard one of them refer to themselves as a “strategist” (which in Russo’s case is code for highly paid Republican p.r. executive).

For all of its branding savvy, the U.S. ruling class is finding it challenging to counter the simple slogan, “We are the 99 percent!”

(For the record, a while ago, I suggested that an occupation on Wall Street should use the slogan, “Give us our money back, you motherf**ers.” This might explain why nobody is paying me to be a strategist.)

But the One Percent has an old saying: If you can’t beat them, beat them up. Occupiers in Boston are now learning what those in New York have already found out: making friends with police officers does about as much good when they get the order to attack as making friends with their nightsticks.

Thousands of activists across the country are unlearning childhoods spent watching shows featuring tough but good-hearted cops. (Although it should be noted that there’s never been a show called Law and Order: Bill of Rights Protection Unit.)

So far, however, every instance of police repression has only made the movement grow stronger, which is one reason why Bloomberg recently announced that he would let the Liberty Plaza encampment continue indefinitely. (That’s not going to make him popular at the Upper East Side cocktail parties.)

But the American One Percent has long had an ace in the hole when the Ninety-Nine Percent start getting rowdy: The Democratic Party, which, now that the Occupy movement has shown it can survive and grow without anybody’s help, is rushing in to offer help.

Nancy Pelosi said she supports Occupy Wall Street’s “message to the establishment…that change has to happen.” One would think that as the Minority Leader of the House of Representatives, Pelosi would have already been in good position to deliver that message herself.

Even Federal Reserve Chairman Ben Bernanke got in on the act, telling a congressional committee that “he can’t blame” protesters for being mad at banks and the government.

For protesters who have withstood pepper-spraying, mass arrests, media blackouts and ridicule, all this must feel a bit like the end of an action movie when the hero fights off hordes of mercenaries, bursts into the lair of the evil villain and finds him sitting in a chair with two glasses of scotch saying, “Come in, I’ve been expecting you.”

We all know the next scene: the offer to join forces. To be continued.

This article was originally published by the SocialistWorker.org