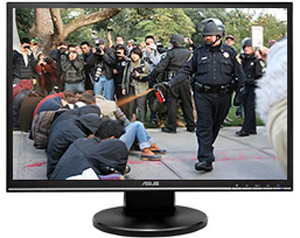 Preoccupied by 24/7 entertainment and inhabiting a world surrounded by LCD screens on a variety of devices, the millennial generation was on its way to becoming completely virtualized, digitized, and distracted. But then something caught their attention — reality. They realized that the power of physical presence is a more potent force than adding your name to an online petition or making a one-click donation. The power of the Occupy movement is its persistent, dramatic, and effective presence.

There is a conventional “narrative” that the Occupy movement is the product of social media. I hold the contrarian view that the Occupy movement actually results from the shortcomings of and dissatisfaction with digital culture. Occupy participants are proving that only by exiting a screen-centric digital cocoon back into the physical world can their discontent with political reality attain the critical mass necessary to achieve change.

Political activists have been using digital/social media for a decade as a method of organizing and disseminating information with growing success. The 2004, 2006, and 2008 elections were increasingly affected by Internet blogs shared among growing circles of the public. Barack Obama owes his 2008 victory almost entirely to fundraising and organizing on the Net.

Although the Obama campaign flourished in the digital ether, it is his “ethereal” nature as a leader that has shown to be his greatest weakness. Delivering a great speech is not action. Saying is not doing. Obama has been, in some ways, a virtual president, a projection in which people have seen the leader they wanted to see, rather than the man who was actually there.

Net-based activists launched Obama into the White House, but the virtual ghost in the machine of social networking and digital media quickly lost out to the more tangible and hardened forces on the ground — the perennial lobbyists, think-tankers, and cocktail-circuit pundits who run the “ground war” of public opinion in this country.

In warfare, technologies such as airpower can cause disruption, but only boots on the ground can control and hold territory. Airpower is akin to the blogs and social networks; it’s modern, clean, distant, and disengaged. Real governmental power requires the presence of political boots on the ground.

Although Obama ostensibly stood for “change,” his troops on the ground have been the usual veterans of Wall Street and K Street for whom change is not a desirable outcome. Even though directly responsible for the crashing and burning of Wall Street, these folks — many of whom also had the ear of Bush Jr. — have been charter members of Obama’s White House power circle. The “professional left” of bloggers and net activists, on the other hand, have been told to “send contributions and shut up.”

We know now that the so-called “Tea Party” is largely the creation of right-wing Washington lobbyists. It was devised as a means to sideline Obama’s vague legislative program of mild changes. It was designed to paint any change that might somehow emerge as part of a “radical leftist agenda.” While the blogosphere on the left was foaming with anger on blogs about Obama’s inaction, the so-called “Tea Party” discontents were out in public making noise. They demonstrated that physical presence — real bodies showing up en masse in real locations — trumped people sitting at their laptop screen, blogging away to a finite circle of like-minded souls.

The reason the media believed the Tea Party was the force to be reckoned with is simply because they bothered to show up and literally get in the faces of politicians. For decades demonstrations had been composed of young ragtag antiwar marchers. But now we had frumpy retirees with crazy racist pictures and misspelled signs, and the media ate it up. Aided and abetted by these lazy and compliant journalists, the political center of gravity seemed to shift dramatically rightward, and media pundits proclaimed the U.S. as a “center-right nation.”

In the 2010 election the power of physical presence won the day when the right actually showed up at the polls, while many progressives sat home. So, the national legislative agenda became about cutting taxes, a position only benefiting the richest 1% of the population.

Jump to Madison, Wisconsin, January 2011. The newly installed Tea Party-blessed governor Scott Walker set upon the task of dismantling a century’s worth of home-grown progressive legislation. Outraged by this move, tens of thousands of angry protesters descended on the state capitol. Unlike the Tea Partiers, they were not a fabricated entity, nor were they chauffeured home in chartered buses at the end of the “event.” Instead, they occupied the state capital for weeks.

As proposed by Adbusters Magazine, it was time to take this mass-protest concept and place it at the scene of the crime: Wall Street. A small group rose to the challenge. At first they looked like the typical contingent of protestors. Unlike in years past, however, they did not go away at the end of the day. They set up camp, they held their ground, and, as this is written, have done so for more than two months. Each day the story grows — as well as the numbers of people joining in around the country and around the world. A populist movement needs a populace to show up in order to make the point. To paraphrase Gil Scott Heron, “the revolution will not be Tweeted.”

I don’t want to diminish the role of digital media as an organizing tool. Blogging and tweeting are okay, but for protest it is ineffectual. It can be ignored. It can be switched off. And as satisfying as it is to vent, it is only a proxy for doing something in the physical world. At a certain point in political life — as in sexual life — it’s better not to be doing it alone in your room. Protest isn’t really protest until you have landed on the territory of those who you have targeted and make them feel the heat.

Dissent is nothing without presence. Occupy is presence coupled with amazing persistence. The digital world has no substitute for people marching in the street making authority figures sweat. The parents of many young protestors could have told them that. Out into the streets and parks is how civil rights were won and the Vietnam War was ended. From recently revealed tapes, even iceman Richard Nixon was touched by the thousands marching in the street against the war.

As people get away from their screens and enter real city environments to share stories, sing songs, hear the pulse of the drums, and feel the camaraderie at Zuccotti Park and other Occupy zones, they give hope that the Cult of Tech has not yet turned this generation into digital drones.

Since the Occupy movement is low-tech by necessity, and no microphones were permitted in the OWS site by law, the group devised what is called the “Human Microphone.” In this method a single speaker speaks one phrase at time, which is then immediately repeated by others in full-voice unison. The cue is simple: the speaker yells “Mic Check.”

This stunning technique has moved from OWS at Zuccotti Park to other locations. It is even finding its way into corporate-friendly forums, business roundtables, press ops that showcase the talking heads too often heard on Sunday talk shows. The bewildered looks on the faces of the politicians and rent-a-cops is just priceless as the process begins. Whom to arrest? Whom to squelch when widely dispersed human microphones are doing their thing in a room full of people? Impolite? Compare this to the raving threats of Tea Partiers heard at the town hall meetings in 2010.

It’s good that people are coming up with work-arounds to technology because those controlling the Net are not just the 1% — they are the .01%.

Just as financial institutions have devolved into a handful of megabanks, communications and Internet service providers, too, are consolidating. What’s more, they have an admitted history of directly and illegally colluding with the government, as well as an agenda to end the Net as an open and free forum.

We learned from Iran, China, and Egypt that when push comes to shove, the authorities will track people, filter information, and blackout access. What we haven’t seen yet, but probably will, is massive disinformation campaigns conducted on social-media channels. Even if it never comes to that, young occupiers and citizen journalists are uploading lots of images of fellow demonstrators — and they are being captured. Who knows how they will be used, perhaps even decades from now, and by whom?

The Cult of Tech tells us that electrons (media) are more powerful than atoms (stuff). However, you can’t live on audio and video. Atoms constitute reality: a place to live and food to eat. Atoms form human beings showing up to reach the critical mass needed for real change. We don’t know how Occupy will play out, but the lessons are clear, boots on the ground are more powerful than fingers on touch screens.