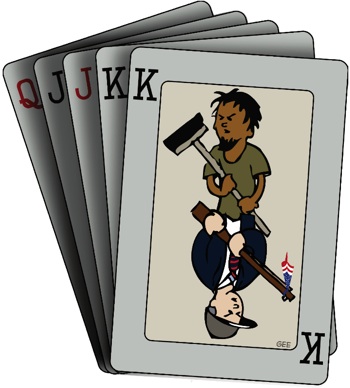 One month into the Occupy Wall Street protest, many are asking if this new movement is just a “left-wing Tea Party.”

Definitely not. This is not a party, like the Tea Party, that seeks to directly affect policy and the electoral process. Because it is explicitly leaderless, it is difficult to imagine a Michelle Bachmann or Eric Cantor emerging as a standard-bearer of the OWS movement. Given their reliance on Wall Street money, as well as radical demands from many protesters, the Democrats will find it almost impossible to channel “the 99 percent” into an electoral tidal wave next year the way the Republicans rode the Tea Party to victory in 2010.

But that does not mean comparisons to the Tea Party should be dismissed. There are striking parallels between the two movements when viewed through political, social and historical lenses.

Some similarities are obvious. The Tea Party and OWS alike oppose the bailouts of the banks orchestrated by both parties in Washington. The two movements are thick with people who feel they have little say in the political process. And supporters on each side think the middle-class “American Dream” is nearly extinct.

When the two movements are viewed as a social force, the resemblance deepens. I have interviewed Tea Party members and protesters at Liberty Park who discuss their involvement in comparable terms. They speak of a personal “awakening,” of finding inspiration in a gathering of kindred spirits, and of not having been political before.

In fact, both thrive on bringing new people into politics. As such, they can be considered populist movements and share another commonality – each creates a new notion of “the people.”

The Tea Party’s rallying cries include “we the people” and “take America back.” Its vision of the people is one of self-reliant, industrious and frugal Americans who through moral example and political force would return this country to the greatness pioneered by the Founding Fathers. The Occupy movement is inchoate, but already “the 99 percent” is its version of the people: those whose dreams and aspirations have been squashed by the greedy and power hungry, but who can revive fairness and justice as national ideals.

For both movements, the legitimate people is complemented by the illegitimate other. For the Tea Party, this takes the form of liberals, unions, immigrants, Muslims, welfare recipients and Obama. It is anyone portrayed as unscrupulously profiting, in power or money, off the American system. For the Occupy movement, it is the 1 percent, the catch-all for bankers, corporate executives, the super-rich and their political allies who have an iron grip on the economy and politics.

Another similarity is that the success of the Tea Party and OWS is owed to their vagueness, at least initially. Each has united disparate coalitions under its banner.

For example, the Tea Party’s historic references appeal to people who feel that social and political changes in the last few decades have made their country unrecognizable. It unites those who oppose unions and immigration, favor small government (apart from the sprawling military-security apparatus) and want a return to the gold standard, cuts in social spending, unlimited gun rights and less regulation of business and markets. The common theme is that parasitical and selfish groups have sapped America’s power.

Likewise, the Occupy movement has been criticized for a lack of demands, but when you speak to individuals there is no lack of ideas: better-paying jobs, government-funded jobs, single-payer healthcare, student-debt forgiveness, a moratorium on home foreclosures, cutting military spending, saving Social Security and Medicare, ending the attacks on unions. One secret of its success, analogous to the Tea Party’s obsession with the undeserving, is that it allows many groups and individuals to see their demands as equivalent to everyone else’s because the opponent is the same: Wall Street.

Most Tea Party and Occupy partisans feel something has gone fundamentally wrong in America, and they are united in envisioning a different type of society. It’s a mistake to reduce either movement to politics or policy; each is motivated by values and idealized ways of relating to one another. But this is where the differences become stark.

The Tea Party embraces heroic, rugged individualism where freedom and liberty are best secured through the free market. In reality, the Tea Party ideology is really about a suburban-based nostalgia for white supremacy. Its disdain for government subsidies does not extend to the interest deduction for homeowners and other supports for a suburban lifestyle.

On the other hand, OWS believes in a collective economy and decision-making, as seen in the General Assembly decision-making and free exchange of goods in Liberty Park. Activists think increasing access to public goods, starting with the public squares themselves, is the way to achieve social harmony.

These radically divergent worldviews are matched by distinct demographics. The average member of the Tea Party is in his or her 50s, whereas the typical Wall Street occupier looks to be a recent college graduate. This probably explains why the two also have different relations to history. The Tea Party romanticizes the American Revolution, while OWS is inspired by uprisings and occupations from the Arab Spring to Europe in which youth say they are trying to reclaim the future.

It would be tempting to define the divide as one between those who support an unfettered free market because government has too much power and those who want a robust social welfare state, or even socialism, because corporations have too much power. That is just part of it. The fact that genuinely popular movements could blossom so quickly at both political poles indicates how hollow the center has become.

The OWS and the Tea Party movements may have diametrically opposed visions of society and power relations, but they both appeal to growing ranks of people who believe the system no longer works for them. Whatever their differences, they both present challenges that will not disappear because of some policy reforms or reshuffling of the cast in Washington.