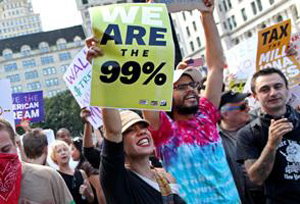 What started as mostly young people hunkering down in New York’s financial district has mushroomed into an inspiring protest movement against runaway corporate power and staggering income inequality.

One of the most visceral examples of the disconnect between the 99 percent and the 1 percent has been highlighted by a series of actions bringing together locked-out Teamsters and Occupy Wall Street activists in New York.

The two groups returned to the high-end art auction house Sotheby’s Wednesday night, bringing crowds that packed the sidewalk and spilled into the street.

About 400 blew whistles and shouted “shame” as patrons in suits filed through a police cordon to enter Sotheby’s much ballyhooed contemporary art sale.

Management has locked 43 blue-collar art handlers out of their jobs since August 1, as punishment for refusing to accept cuts to their hours, benefits, and job security. They’re members of Teamsters Local 814.

Occupy Wall Street protesters have conducted serial disruptions during Sotheby’s auctions, standing up one by one and denouncing union-busting by the company, which is making soaring profits but insists it should be able to replace full-time workers with lower-paid temps. Sotheby’s responded by requiring a $5,000 deposit to enter its auctions.

The Occupy Movement couldn’t ask for a better poster child for wealth and power run amok. “Sotheby’s: Where the .01 percent go to shop,” said one sign Wednesday. “Art for the masses, not the upper classes,” they chanted. “All day, all week, occupy Sotheby’s.”

Seven protesters were arrested Wednesday as they attempted to block the main entrance. One neatly dressed demonstrator was carried down the sidewalk and around the corner suspended only by his arms, a bike lock around his neck. “Let him go!” yelled the crowd as police loaded him into a squad car. The protesters had locked themselves to each other to make them difficult to remove.

Last week four were arrested for sitting-in at the auction house, and pickets have targeted Sotheby’s board members constantly in recent weeks. At a fancy dinner last week for the New York Women’s Foundation, where Sotheby’s board member Diana Taylor chairs the board, the wives of five art handlers called on Taylor to end the lockout.

“The art market is flush with money and booming,” noted an arts writer reviewing the auction season for the New York Times. The author expressed vague surprise that this was true despite continuing economic misery for American workers.

Inside, one painting sold for $61.7 million, more than double its estimated value, which the Times reported as the “high point,” of the auction, noting “the salesroom burst into applause.”

The article didn’t mention the noisy picket line outside. Instead, it quoted a former Sotheby’s expert: “People still really enjoy the auction process,” she said. “It’s enthralling, they get a thrill and they get to take something home besides.”

Labor has embraced Occupy Wall Street because the movement is succeeding where unions have stumbled—turning the national attention back onto those responsible for the biggest economic collapse since the Great Depression, and onto who should pay to clean up the mess.

In two-and-a-half years on the defensive about the auto bailout, health care reform, and so-called greedy public sector workers, unions have spent untold time and treasure trying to turn the tide of public opinion. From the One Nation rally last fall to the AFL-CIO’s April actions in solidarity with Wisconsin, labor has struggled to silence the drumbeat of austerity and anti-unionism.

Some unions, notably the Service Employees, with their Fight for a Fair Economy campaign, and National Nurses United, with their Main Street Contract with America, have made changing the national economic debate a major thrust of their activity. But outside the Wisconsin uprising, none of labor’s efforts have pricked the national consciousness in the same way as Occupy Wall Street.

“This has really struck a nerve way up the spinal cord,” said Jason Chambers, a 10-year ironworker who’s been camping out in Dewey Square since the start of Occupy Boston. “People are just fed up that there’s no accountability for these banks that got bailed out. Meanwhile our rights are under attack across the country.”

Although participating in the occupy movement has been an adjustment for labor activists unaccustomed to the lack of formal demands or clearly identified leaders, for others it’s opened up new horizons. “This is the first time I’ve seen real democracy in my lifetime, at the general assembly at Occupy Boston,” Chambers said.

This third-generation ironworker, die-hard Bruins fan, and self-described regular guy says the “occupy” phenomenon has had a profound impact on him and his co-workers. “My vote counts and my voice is heard. To be able to contribute to it is amazing.”

With Occupy Wall Street’s meteoric rise has come pressure to clarify who’s in charge and what protesters want. But rather than pressing occupiers to move beyond the rallying cry “We are the 99%,” unions should treat the movement as a strategic ally—a megaphone and a magnifying glass for labor’s ongoing battles over everything from public sector layoffs to preserving defined-benefit pensions.

Together it’s a powerful one-two punch, with Occupy Wall Street crystallizing the big-picture problems of our upside-down economy and labor providing potent examples of corporate excess—like Sotheby’s—and clear targets for a movement ready to take to the streets.

It’s a combination that has worked well in previous challenges to the long winter of corporate rule, from local living wage fights and campus-worker struggles to flashpoints that brought labor together with new allies, such as the global justice movement that emerged from 1999’s “Battle in Seattle.”

These actions are starting to unwind the conventional wisdom that there is no alternative to budget cuts and unemployment, by taking aim directly at the 1 percent who’ve gotten filthy rich by squeezing the rest of us.

Thanks to the occupy movement, new flying squads are springing up every day ready to join the fight. Occupiers are planning creative disruptions, whether it’s a pie in the face at a bankers convention or a glitter bomb during a corporate cocktail party. More than a thousand have been arrested in New York alone since the protest began.

More arrests will surely follow if protesters and their labor allies continue to disrupt business as usual, and especially if they move from symbolic civil disobedience to shut-it-down confrontations. Those can be powerful, as shown this fall by mobile picketers at Verizon and by longshore workers in Washington state who blocked trains from delivering grain to scabs in a port.

But the most important lessons union activists should soak up from time spent shoulder to shoulder with the occupiers are their audacity and their commitment to direct democracy.

After a generation of defeats, union leaders instinctively head for what’s “politically possible.” The occupiers have turned that conventional wisdom on its head, focusing not on what we can win this minute but on what we deserve.

The ground is fertile for a new common sense, and the seeds are just hitting soil.

This article as originally published by Labor Notes.