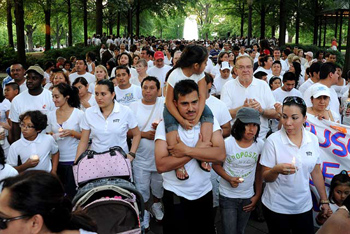 Recently I was invited to be a part of a delegation of labor leaders heading down to Alabama to speak out against one of the worst immigration laws in the country. I found it interesting, because the trip was billed as a “black” labor leader delegation. I’ve heard a lot about the black-brown discussion over immigrant rights, so I was ecstatic that this delegation of specifically black folks was going down to witness this law’s impact first hand. As a commentator on race and blackness, I felt it important that I join. Although there are those within the community who aren’t supportive, there are many who are absolutely against the prejudice that we’ve seen popping up across the country this past year, under the guise of “saving American jobs.”

I had been aware of Arizona’s SB-1070, so when the AFL-CIO asked me to participate I felt I already “got it.” I thought I knew what the situation would be when we arrived in Birmingham.

Over two days we met with activists, business owners, and those that were affected the most by the law—undocumented people themselves—and my understanding was completely changed. I was against the law when I arrived in Birmingham. But 48 hours later I didn’t simply oppose it; I was horrified and angry for the people who have to live under it and confused as to how this could have ever been allowed in the first place.

To call Alabama’s HB-56 harsh is an understatement. From not being able to receive a birth or death certificate to being at risk for deportation if you seek child support—HB-56 not only creates an unwelcoming environment for any brown immigrants, it harks back to a terrible time in Alabama history that many thought was in the past.

We were all sadly mistaken.

As the delegation met undocumented residents and activists working with them, one thing that stood out was a broad climate of fear that will be familiar to those who lived through Alabama’s first Jim Crow era. Mary Bauer of the Southern Poverty Center spoke to us at the opening session of the delegation. She retold the story of someone who went to make a cash purchase at Walmart and was asked for identification. That isn’t in the HB-56 law. There isn’t any provision that you can’t make a cash purchase. But when the law of the land is prejudice, it creates vigilante immigration policing. People feel empowered to police anyone they think isn’t documented in any way they feel is reasonable.

As I spoke about HB-56 on social media, a plethora of responses came in. Some people got angry; some of them were black. The people affected by this law deserve it, they said. They broke the law and they should have thought about the consequences when they were paying a coyote to bring them across the border to steal American jobs. They’re flooding our country and they get free schooling for their kids, while our tax dollars are paying for them and they pay nothing! Why should we care about what’s happening to them?

Where do I start?

There’s also evidence that the immigrant workers who have come to Alabama have, in fact, helped revive some of its dying, small-town economies.

HB-56, on the other hand, hasn’t helped Alabama. Samuel Addy at the Center for Business and Economic Research at the University of Alabama predicted that the state will lose 40 million dollars simply from the loss of spending from both documented and undocumented immigrants. Apparently, while lawmakers were writing this particular bill so they could protect Alabama’s economy, they forgot how all those pesky immigrants spend money.

Farmers are losing fields of crops because so many immigrants have left. So now the work just doesn’t get done. By trying to “save American jobs” HB-56 is going to destroy Alabama businesses. It seems the only immigration problem Alabama has is the one that it just created. Congrats.

During the delegation’s visit, we heard testimonies about the circumstances through which some of immigrants end up without documents. People arrive on work visas that eventually expire. Others grow up here in the United States not knowing they’re undocumented. The popular narrative of someone sneaking over the border by the cover of night is a great way to convince people that something terribly evil is occurring. But hearing about a teenager’s attempt to apply to college, only to find out his or her birth certificate doesn’t exist, changes your view of things.

I was struck by the patriotism of the undocumented immigrants who shared their stories with our delegation. They spoke of the American Dream—of how much they love this country and just want to work hard so that they can build something for their family. Many have been in the country for numerous years and have built communities. The delegation listened to these stories from the mouths of those now persecuted in Alabama and I found myself amazed that this is unfolding in 2011.

Repeatedly, our delegation discovered that the popular narrative about immigrants as a “problem” didn’t hold up to the up-close, human reality of immigrants’ lives and the communities of which they’re a part. Take the they-don’t-pay-taxes trope, for instance. Some undocumented immigrants we met expressed their anger at this demonstrable lie. One woman spoke passionately through an interpreter about her frustration with the media pushing this meme. She explained she’s paid into the Social Security system for 13 years, but can’t claim anything from it.

“We don’t wear shirts that say, ‘Don’t tax me, I’m undocumented!’ ” she pointed out.

Many of the people spoke of having tax IDs that allow them to work—with taxes deducted from their paychecks. A simple Google search shows that this has been covered previously by major news outlets, but when the debate heats up about undocumented immigrants this fact gets lost somehow. It’s hard to yell about how people are stealing from the system when you have to acknowledge that they’re paying into the system just like the rest of us—and that, in fact, they’re the ones getting taxed for nothing.

But perhaps the part that is most often lost in the debate over these increasingly tough immigration laws is that they poison the environment for everybody. HB-56 allows for law enforcement officers to request proof of citizenship if there’s reasonable suspicion—read: brown people. Imagine if you happen to have an attribute that now means you can be harassed at at any point; black people don’t have to work too hard to imagine that. A local Jewish business owner who is married to a Mexican woman spoke to us about how a school wanted to test his 6-year-old daughter to see if she (who is a U.S. citizen) spoke English—based on nothing beyond his Mexican wife bringing their child to class. Young brown students are teased and questioned about their immigration status because the other students’ parents are doing the same thing to the brown folks walking down the street.

The AFL-CIO delegation members all vowed to go home and speak of the situation in Alabama and work to repeal HB-56. Many of the black labor leaders noted how familiar this feels. This type of prejudice isn’t new. It’s just repackaged, aimed at a different group and adorned with a shiny new sticker that says “Pro-America!”

America’s immigration policy needs a major overhaul—no one argues this fact. But because we’ve failed to create a humane system that makes sense, people are suffering. People are living in terror. At what point does one say, this has to stop? Scott Douglas answered that question best when he addressed the delegation. “Think of this as self preservation,” he said. “Stop Alabama before it spreads.”

This article was originally published by Color Lines.