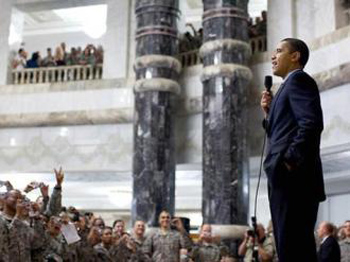 There has been no shortage of crocodile tears from the U.S. political establishment about the violence against protesters in Syria and Iran. Secretary of State Hillary Clinton and President Barack Obama have taken turns condemning the brutal suppression of movements for social justice in those countries.

Of course, they had a harder time standing up for human rights when it came to similar repression against the revolutionary movements in Tunisia and Egypt earlier this year. It is difficult, after all, to say negative things about one’s friends.

Meanwhile, the absolute silence from the White House regarding the growing repression against peaceful demonstrators in this country speaks volumes.

Since it began in mid-September, the Occupy movement has spread from Wall Street to cities across the country. The movement has as its backdrop the most severe economic crisis since the Great Depression and record levels of disparity in wealth distribution.

Anyone who works a regular job or is looking for one understands why the movement has spread so rapidly. Thousands of people around the country are protesting against a system that denies them a future.

Now local governments have begun to claw back the space taken by protesters, and the strategy runs the gamut from savvy (Portland) to heavy-handed (Chicago) to naked brutality (Oakland). Likewise, the mass outpouring of solidarity across the country shows an increasing awareness that the battle lines are being drawn.

Every government wants to maintain the façade of respect for the rights of its citizens. The security forces in Syria assert that they are only squaring off against “foreign-backed militants” attempting to utilize the demonstrations for nefarious purposes. In the U.S., the preferred bogeymen are “unruly” and “ultra-radical elements” whose only desire is to “create chaos.”

The reality is that any effective movement designed to create social change will be met with hostility by those sworn to serve and protect the establishment. The police may try to justify their aggression as a response to provocation, but it is plain to see who actually comes to a protest to stir up trouble: They come in uniforms and carry big sticks, just itching to be “provoked” into using them.

That the enormous amount of tear gas used by riot cops in Oakland was intended for a “small handful of miscreants” in an otherwise acceptable expression of free speech is just too ridiculous to be taken seriously. Their orders were to clear out the demonstrators, and they came prepared to do their job.

One particularly striking piece of footage shows a man holding a video camera in a decidedly non-threatening position being thrown to the ground by police. But, as O’Donnell pointed out, the video camera is itself a threat: “Since the Rodney King beating was caught on amateur video, American police officers have known that video cameras are their worst enemy.”

They can cluck about kids with masks and spray paint all they want, but anyone with access to a computer can see that it is peaceful protesters and onlookers who are being beaten and dragged off to the paddy wagon.

The number of Occupy protesters arrested has grown to more than 3,000 and counting. Those who have sustained serious injuries as a result of police violence are harder to count, though there are a few especially infamous cases. In particular, two Iraq war veterans were hospitalized in separate incidents in Oakland: Scott Olsen took a police projectile to the head, and Kayvan Sabeghi suffered a ruptured spleen from a vicious beating at the hands of Oakland’s maniac cops.

The unconscionable use of overwhelming force to put down a peaceful assembly has rightfully aroused indignation across a broad section of the population. Americans would like to take for granted that they live in a country worth fighting for, one which respects the right of its citizens to dissent. They get upset when it becomes apparent that there are actually significant limits to those rights.

A short YouTube film entitled I Am Not Moving brilliantly displays the hypocrisy of the United States’ rulers when it comes to protesters demanding their fundamental civil rights.

The video interweaves clips of Hillary Clinton and Barack Obama calling on the Iranian, Syrian and Libyan governments to refrain from violence and respect the rights of protesters with footage of Occupy Wall Street protesters being attacked and arrested by New York police.

To be sure, the violence against the masses of protesters in Syria is more severe, but this represents an escalation by the Syrian state in the face of a movement that has shaken the government to the core and refuses to go away despite the repression.

The lesson of New York and Oakland for a new generation of activists is that the willingness to deploy the police to put down protests is not unique to despots in faraway places. This is embarrassing for the U.S. president, not only because his rhetoric about the right to protest is obviously empty, but also because of how close he is politically to the “despots” squelching free speech in places not so far away.

As Khury Peterson-Smith points out in a recent article, “The mayors ordering the crackdowns against Occupy encampments are almost entirely Democrats–and not just from the mainstream, but some of the most liberal officeholders in the party.”

Not all of the Occupy encampments have been met with violence and arrests, but most Occupiers are now familiar with the low-intensity warfare waged by city officials who dig up various ordinances in efforts to limit the occupations and drain them of their vitality.

A sincere willingness to cooperate with supposedly sympathetic local politicians has led some Occupiers to allow their encampments to be moved to new sites in less visible areas. Others have had sprinklers “accidentally” turned on even in spaces officially designated for occupation. If all else fails, every police department has access to good old-fashioned billy clubs. Their strategy is to marginalize who they can and brutalize the rest.

The U.S. message to Syria and Iran is, “Do as I say, not as I do.” But at home, the message to mayors is different. Here, the administration turns a blind eye–or casts a subtle yet approving nod–toward abuses against protesters at home.

As the Occupy movement grapples with such repression, more and more people are absorbing the irony of hypocritical politicians counseling other countries on the need to tolerate dissent.

The U.S. government is at odds with the governments of Syria and Iran and therefore will routinely criticize any aggression against dissenters in those countries. However, now that the spirit of revolt has come home, the rulers will resort to any dirty trick they can get away with in order to keep their system sputtering along.

We can’t let the political representatives of the 1 percent denounces harsh measures against civilians if it suits them, while they condone the same repression if the protests are directed against them.