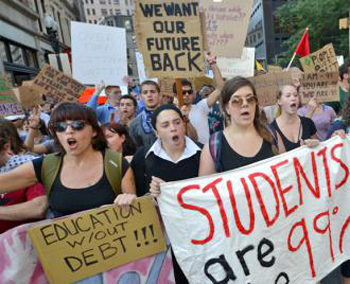 College students across the U.S. are drowning in debt–yet a promised plan by the Obama administration to provide “relief” will do little in the long run to reduce their burdens.

Facing increasing pressure from an Occupy movement that has brought attention to youth unemployment and crushing student debt among other issues, President Obama announced an executive order in October that would decrease student loan payments for some borrowers and allow others to consolidate their loans at lower interest rates.

In addition, the “pay as you earn” plan will forgive student loans for some borrowers after they make 20 years of payments, rather than the 25 years mandated under current law.

This proposal comes just months after Obama’s 2012 budget cut Pell Grants that would allow students to attend school year-round, and got rid of government subsidies that paid interest on student loans for graduate students, adding to their debt burden when they graduate.

Now, pitching the plan as a lifeline to those struggling with massive student loans, Obama has pointed out that the plan would have a stimulative effect on the economy, as money spent repaying student loans could otherwise be devoted to consumer goods.

For those with qualifying federal student loans, Obama’s order means that changes to the “Income-Based Repayment (IBR) Plan” approved by Congress last year will take effect in 2012, rather than 2014 as originally planned.

The IBR plan currently allows borrowers who fit the criteria of having excessive student loans relative to their income and family size to pay a lower monthly amount on their student loans over a longer period of time.

Currently, those who fit IBR criteria pay 15 percent of their discretionary income (all income over 150 percent of the federal poverty level) in student loan payments each month. Obama’s plan would reduce this to 10 percent. In addition, those paying their loans back via the IBR program will have their remaining balance forgiven after 20 years of making payments under the program, rather than the current 25 years.

While these changes will assist some borrowers burdened by excessive student loan debt, only a fraction of those with student loans will qualify under Obama’s order, and there are drawbacks to the IBR plan.

The changes to the IBR plan will only impact those who take out a student loan in 2012 and have taken out a loan between 2008-12. That disqualifies recent graduates as well as those currently in default.

And according to the Federal Student Aid office, borrowers who enroll in IBR may end up paying more interest on their student loans than they would if they repaid them in the standard 10-year period. This is because IBR stretches repayment out over a longer period of time, during which interest continues to accrue.

The consolidation portion of Obama’s plan would allow borrowers with both direct federal loans and loans from the Family Education Loan Program (loans from private lenders backed by the government) to consolidate their debts and pay up to one-half of a percentage point less in interest, which would reduce monthly payments and the total amount repaid over the life of the loan. Private loans, and those who have already consolidated their loans with private lenders, will not qualify.

The Obama administration claims that 6 million people would be impacted by the loan consolidation portion, while 1.6 million would qualify under the changes to the IBR plan. In other words, the plan will impact only about one-fifth of the 36 million people in the United States with student loan debt.

not going to make a huge difference…between both programs, it’s probably going to impact maybe about 7 million of those people in repayment or new students coming into the program…The income-based program that was announced today is…only going to affect students in college right now.

So all of these students, these recent college grads who have graduated with a lot of debt who are now looking for jobs and can’t find them or are doing jobs that only require a high school diploma, it’s not going to provide much help to them.

Student loan debt is at crisis levels. The class of 2011 is the most indebted in U.S. history, with an average debt burden of nearly $23,000. According to the Wall Street Journal, “That’s 8 percent more than last year and, in inflation-adjusted terms, 47 percent more than a decade ago.”

According to USA Today, total student loan debt in the U.S. is on track to exceed $1 trillion this year, having surpassed credit card debt. And while consumers have paid down other forms of debt, student loan debt continues to rise, doubling in the last five years.

This is a result of the skyrocketing cost of college tuition and fees, which has increased at over four times the rate of inflation over the past 25 years, a process that has accelerated in recent years as budget cuts target higher education spending in states across the country.

Average tuition at public four-year universities has tripled over the past three decades, as states have shifted the burden of paying for college onto students. According to “State of Young America,” a report by the policy center Demos and the Young Invincibles, “In 1985, 23 percent of higher ed revenue was from tuition–by 2010, it had climbed to 40 percent.”

At the same time that the cost of college has risen dramatically, students in need of assistance who once received grants now have to borrow to pay tuition and fees. “Federal financial aid has shifted from a grant-based to a loan-based system,” says the Demos report. “Today, 36 percent of all federal aid is grant-based, down from 55 percent in 1980.”

And, grants available to low-income students have not kept pace with rising costs. According to the report, “in 1980, the maximum Pell grant covered 70 percent of the costs of a 4-year public college, including room and board…today, it covers 34 percent.”

African Americans are also disproportionately indebted. According to Demos, “among 2008 bachelor’s degree graduates, 80 percent of African American students borrowed to pay for their education in 2008, graduating with an average debt of nearly $29,000.”

Those who do not graduate must still pay back their loans, without the higher wages on average that come from a college degree. David from New York City explains:

After four years at college, I left half way through my engineering program because of mental health issues. Since then I’ve worked in the service industry, making about 25 cents more than minimum wage. I had $10,000 debt when I left school…I still have the same amount of debt now despite 10 years of making payments over the last 25 years. I’ve been in debt my entire adult life…it’s been a ball and chain around my neck for 30 years.

Unlike credit card and mortgage debt that can be discharged in bankruptcy, student loan debt cannot be gotten rid of except by paying it off or having it forgiven through select programs like the IBR. Wages and even Social Security payments can be garnished to collect. In other words, in order to obtain access to higher education, working-class students are forced into massive debt that in some cases can continue to haunt them even after they retire.

Ben, a student at the University of Massachusetts-Amherst, a public university, who will graduate with $50,000 in loans, said:

My financial aid was pretty good–for the first two semesters. Then my grants dried up. Then more of my loans were of the unsubsidized kind, meaning my debt will have an even higher rate of interest charged. It’s a scam, it’s unjust, it’s modern day indentured servitude. I’ll be paying this debt off for the rest of my life–and when I die, there will probably still be some left.

Youth unemployment is at record highs, with less than 50 percent of youth aged 16-24 employed, the lowest figure on record at the Bureau of Labor Statistics. More people in what the mainstream media is calling a “lost generation” are unable to keep up with student loan payments. According to USA Today, “The portion of borrowers in default–more than nine months behind on payments–rose from 6.7 percent in 2007 to 8.8 percent in 2009, according to the most recent federal data.”

How can we tolerate an educational system that is more worried about making money than educating people? Especially now, when they check your credit score for any loan approval–when you’re looking for a place to live, buying a car or even when you look for a job…It’s economic disenfranchisement. We already have a generation of students with loans like myself who won’t be addressed by Obama’s plan. What about all of us who can’t discharge or pay off these student loans? What about our future?

In addition to only impacting a fraction of borrowers, Obama’s executive order does not even begin to address the root causes of the student loan crisis–skyrocketing tuition and fees, stagnant wages and record youth unemployment. It is a bandage on a gaping wound.

The student loan crisis is one of the many grievances driving the Occupy movement around the country. Protestors at Occupy Wall Street have proposed demands including free higher education and the forgiveness of all student loans. At Occupy Philly, there is a “Student Loans Jubilee Working Group” raising similar demands.

On October 5, as workers joined in a community-labor march in which 20,000 people take to the streets of New York City, thousands of students on hundreds of campuses in New York and across the country walked out, protesting among other things the rising cost of higher education and the loans that students are saddled with just to obtain a degree.

It is in this context, as well as the approaching 2012 election, where Obama will be hard-pressed to match the unprecedented youth turnout that was a key to his victory in 2008, that Obama issued his order on student loan debt. He and his advisers no doubt hope his plan will bolster support for his re-election bid–and make it seem as though the government is listening to the Occupy movement and taking action.

But while many Occupy supporters understand that Obama’s executive order on student debt is a response to the pressure he is feeling from Occupy Wall Street, they aren’t satisfied and are demanding more.

According to New York Public Radio, “[M]any Occupy Wall Street protesters see the president’s move as trying to harness their energy without doing enough to change the system.”

“It’s really frustrating to see how something [that’s presented] in the language of helping us is not actually doing anything,” said protester Jason Ahmadi. “The people have these real concerns and mobilized to look for real answers, and they make changes that have the language of solving the problem, but actually don’t do anything.”

Rather than dampen the struggle, Obama’s announcement has spurred activists to take further steps–Occupy supporters have declared November 12 “Student Debt Day,” with protests planned at Zuccotti Park, the site of Occupy Wall Street, and a call for it to spread to other encampments.

This article was originally posted by Socialist Worker.