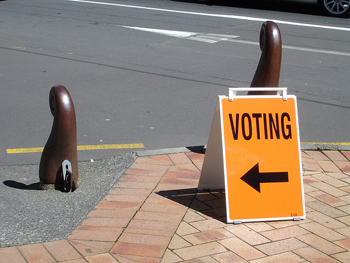 A year after Republican politicians and their media echo chamber claimed that American had—with the GOP “wave” election of November, 2010—embraced conservative economic, social and political values, the voters of November, 2011, chose to:

Ohio voters rejected Governor John Kasich’s assault on collective bargaining protections and public employee unions by an overwhelming 61-39 vote. Said AFL-CIO President Richard Trumka, “Ohio’s working people successfully fought back against lies pushed by shadowy multi-national corporations and their anonymous front groups that attempted to scapegoat public service employees and everyone they serve by assaulting collective bargaining rights.” The result was not just a win for organized labor. It was a rejection of the crude politics of austerity that would balance budgets in the backs of working families in oder to reward CEO and banksters. “Ohioans from all backgrounds and political parties rejected the crazy notion that the 99 percent — nurses, bridge inspectors, firefighters,and social workers — caused the economic collapse, rather than Wall Street.” said Trumka.

Arizona State Senate President Russell Pearse, the author of that state’s draconian anti-immigrant legislation, was removed from office in a recall election that saw the right-wing Republican defeated by moderate Republican Jerry Lewis. Randy Parraz, the co-founder of Citizens for a Better Arizona, the group that  organized the recall drive, said: “This election shows that such extremist behavior will not be rewarded, and will be held accountable.”

Maine Governor Paul LePage and his allies eliminated same-day registration rules that made it possible for citizens to register and vote on election day. A petition campaign by Mainers forced a referendum on the issue and, on Tuesday, voters chose by a 61-39 margin to restore same-day registration. “The path of history is clear,” said former Senate Majority Leader George Mitchell, D-Maine. “Our country has consistently marched forward, making our elections more accessible and open and encouraging people to participate.”

Mississippi voters were asked to amend the state Constitution to define life “to include every human being from the moment of fertilization, cloning or the functional equivalent thereof.” The general assumption among pundits was that the amendment would be adopted. Instead, it was rejected with relative ease — by a 58-42 margin. “The message from Mississippi is clear,” said Nancy Keenan, president of NARAL Pro-Choice America. “An amendment that allows politicians to further interfere in our personal, private medical decisions, including a woman’s right to choose safe, legal abortion, is unacceptable.”

5. Give Democrats Critical Victories in Kentucky, Iowa and New Jersey.

In Kentucky, which voted for John McCain in 2008 and Rand Paul in 2010, Democratic Governor Steve Beshear was reelected by a 21-point margin as Democrats one down-ballot races in a result that suggested the Republican “wave” of last fall has receded. At the same time, a special-election win in Iowa allowed Democrats to retain control of the state Senate in that state. In New Jersey, voters rejected Republican Governor Chris Christie’s attempt to shift the state Senate from Democratic to Republican control; in fact, they expanded Democratic control of the legislative chamber.

Democrats did not win everywhere. There were setbacks in legislative contests in southern states such as Virginia and Tennessee.

Progressives experienced disappointments. In Mississippi, for instance, a Voter ID law that will erect new barriers to participation in the political proces won 60-40.

This article was originally published by The Nation.