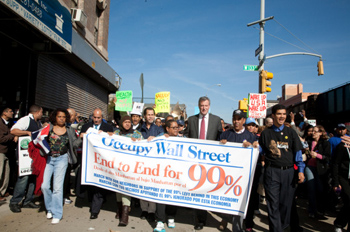 The Occupy Wall Street movement made its presence felt across the length of Manhattan Monday, November 7th, as hundreds of indignant New Yorkers marched almost 200 blocks from Washington Heights to Zuccotti Park, under the slogan “End to End for the 99%.” CUNY faculty and students were among the participants.“The movement is spreading,” said Lizette Colón, an academic counselor at Hostos Community College. “It’s not just happening in Zuccotti Park. It’s happening everywhere.”

Colón, who had the day off from work, said she joined the march because she sees her students’ opportunities being diminished, as the impact of the recession is made worse by austerity measures. Colón said it makes no economic or political sense to increase tuition and cut CUNY’s budget while the State’s millionaire’s tax is allowed to expire

“My students’ access to education is a right and a moral responsibility and I see it fading away every day,” said Colón. 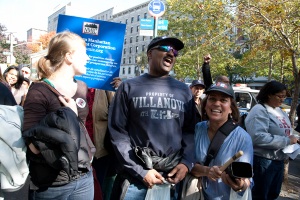 Monday’s march began at 181st and St. Nicholas Avenue in the heart of Washington Heights, where the mainly Latino and immigrant residents have long felt the impact of poverty and a lack of government services. Stretched along several blocks of sidewalk, the boisterous crowd spilled down several blocks of St. Nicholas Ave. Participants chanted “We are the 99%” and “Somos el 99%,” alternating between English and Spanish, and drawing the attention of people standing in storefronts and looking down from tenement windows.

“Those are the people we have to get out from behind their windows and into the streets,” said Paola Martinez, a Baruch College student who lives in Washington Heights.

Martinez, 23, a political science major, goes to school full-time while working two part-time jobs and raising a small child. She would like to go onto graduate school but faces a likely $40,000 debt when she finishes her undergraduate degree in two years.

“People from my generation,” Martinez said, “are going to take longer to achieve things in life, whether it’s buying a car, or owing a home or starting a family, because of all this debt.”

The march turned onto Broadway at 168th St. and made its way through Harlem, the Upper West Side, Chelsea, Union Square and Soho before finally arriving in Zuccotti Park (renamed “Liberty Park” by the Occupy Wall Street protesters) about six hours after it began.

“Communities like Washington Heights have been dealing with these issues forever,” said Christine Williams, a member of Transit Workers Union Local 100, as she marched on Broadway. “It took OWS to bring us all together – black, brown or white, we are all the 99%.”

This article was originally published by PSC-CUNY.

John Tarleton is Associate Editor for the PSC Clarion.