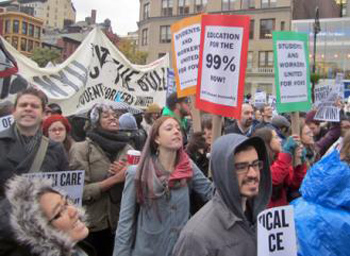 The chant “We are the 99 percent” echoed through the streets of New York and dozens of other cities around the country during a national day of action November 17 that marked the two-month anniversary of the Occupy Wall Street protest movement.

Some 35,000 people filled lower Manhattan’s Foley Square in the early evening hours, and thousands more spilled onto the surrounding streets as the culmination of a day of action that began with civil disobedience aimed at disrupting the opening of the New York Stock Exchange.

The day showed the potential of the Occupy movement to gather new supporters, as hundreds gathered at transit hubs in New York City’s outer boroughs, conducting a people’s microphone on subway cars on their way to the convergence at Foley Square.

“I’m here because both my parents have to work at age 64,” said Norma Gatica on the subway ride to Foley Square on the Occupy Queens contingent. “I’m deep in debt and can’t find a job, because there are none.”

Meanwhile, some 5,000 students gathered in Union Square for an unpermitted march to the main rally, evading police attempts to corral them.

Among the students at Foley Square was a doctoral student at New York University who had brought her 2-year-old to the demonstration because she couldn’t afford child care. “Let me be clear: NYU is union-busting,” she said of the university, which has taken a hard line against graduate employee attempts to unionize. “NYU is not for students. NYU is not for education. NYU is for profit.”

As Foley Square filled for the 5 p.m. convergence, a light show projected the words “We are the 99 percent,” and “Another world is possible, we are unstoppable” onto the Verizon headquarters building, as thousands took up the chants. A series of speakers gave moving accounts of their personal plight–of unemployment, debt and impoverishment–that resonated with the demonstrators.

The huge, multiracial and working-class crowd–including many thousands of union members–reaffirmed the broad popularity of the Occupy movement in the wake of Mayor Michael Bloomberg’s police crackdown on the Occupy encampment. While politicians in Washington are negotiating a deal to slash Medicare and other social programs, Occupy’s message of stopping the cuts and taxing the rich has captured the imagination of working people across the U.S.

The Foley Square protesters had a special message for the billionaire, who ordered the NYPD’s early morning raid on Zuccotti Park November 15: “Bloomberg, beware, Zuccotti Park is everywhere!”

But the protest also highlighted new political challenges to the movement–in particular, how to deal with increasingly aggressive police. Less than three days after the cops’ military-style sweep of Zuccotti Park, police took every opportunity to intimidate protesters. At a protest at the New York City Department of Education, police shoved barricades into a relatively small crowd, even after the parents and teachers chanted, “There are children here!”

Later, at Foley Square, police aggressively penned in the crowd with barricades in order to prevent thousands from joining the main demonstration. The cops were violent toward anyone who even hesitated to comply with their orders–beating one man with professional-grade photography equipment.

Given police attempts to limit and bully the protests, many Occupy Wall Street activists were angry at the way the protest marshals–most of them from the 1199 Service Employees International Union (SEIU)–worked with the police.

When police severely restricted the numbers of people who could leave Foley Square at any one time in order to participate in a march over the Brooklyn Bridge, the marshals physically prevented protesters from walking in the road, funneling the crowd into a pedestrian walkway instead. The march took place after a protest on the bridge led to the arrest of about 100 protesters, including SEIU President Mary Kay Henry.

“With the numbers they had there, we could have gone back to Zuccotti Park or could have taken the streets,” said one activist. “There was a good section of the crowd, if not the whole crowd, who wanted to go. In that sense, it was a missed opportunity.”

Occupy activists who participated in planning for the Foley Square rally were also upset that the agreed-upon plan for several decentralized speakouts was scrapped. Instead, a single sound stage was set up, apparently controlled by the SEIU, thereby limiting the number of people who could speak.

The move raised questions among Occupy Wall Street activists who have helped develop what has been a powerful and productive alliance between the movement and organized labor.

One issue will be the movement’s attitude to the 2012 elections. The day before the November 17 protests–which were mostly driven by the SEIU across the U.S.–the union announced its endorsement of President Barack Obama for re-election. Many of the core Occupy activists, by contrast, joined the movement because it targeted the corporate dominance of both political parties.

The issue will come to the fore soon, as SEIU calls for a tent city encampment on the National Mall in Washington, D.C. to advocate for Obama’s jobs legislation. This signals an effort by the SEIU to shift the focus of the movement away from Wall Street and corporate power–and toward the Republican-controlled House of Representatives, to the benefit of Democrats, who control the White House and the Senate.

While New York’s November 17 protests were the biggest, there were demonstrations in dozens of cities from Coast to Coast.

In Los Angeles, Occupy activists marched to a Bank of America branch and then set up tents in the middle of Figueroa Street–the crowd swelled to more than 1,000 at its high point.

In other cities like Seattle, demonstrators followed New York’s lead by targeting major bridges. This was a symbol suggested by unions to draw attention to the demand that the government launch a jobs program aimed at fixing infrastructure around the country. The focus of the Chicago protest was similar, with a handful of union activists getting arrested for blocking a bridge over the Chicago River during a three-hour protest that drew more than 2,000 Occupy activists and union members.

The sheer size and number of protests highlight how far the movement has come since it began only two months ago. Occupy Wall Street began with just 500 demonstrators rallying and marching in Manhattan’s financial district. That demonstration ended with the movement settling down in little-known Zuccotti Park, a bland corporate-owned plaza a block away from the World Trade Center site.

Within weeks, Zuccotti Park–renamed Liberty Plaza by the movement–became the heart of a mass protest movement unlike any the U.S. has seen in generations.

Many thousands of people were drawn to Liberty Plaza by the excitement of coming together with so many others expressing the widespread bitterness at a society run by the 1 percent in the interests of profits and power. Many more people who never got to Zuccotti Park took inspiration from the Occupy struggle, and hope that we can stand up and demand change.

The scale of the political and police assault on the movement is an indication of how seriously it is taken by America’s ruling elite.

Police crackdowns against Occupy encampments and protests have been escalating for weeks. That culminated in New York in the early-morning hours of November 15, when the NYPD attacked Zuccotti Park–with hundreds of cops in riot gear sealing off the area, arresting anyone who remained behind and trashing the camp’s tents, equipment and library.

But if Bloomberg and New York City’s 1 percent thought they had conquered the Occupy movement, the November 17 day of action proved that this struggle is here to stay, whether the encampment in Zuccotti Park is reestablished or not.

One indication of the determination to continue the fight was the morning protest that clogged the narrow streets around the New York Stock Exchange. Occupy supporters confronted the bankers and speculators as they scrambled into the building.

The familiar chant, “We are the 99 percent” was followed by another, with the same cadence: “We are the source of all your wealth.”

At the corner of William and Exchange Streets, there was an inspiring speakout. Using the people’s microphone, protesters shared the stories that had brought them to the movement–from a worker fired by the insurance giant AIG, to an adjunct professor at City University of New York making $12,000 a year, to a homeless trans youth, to a Chilean immigrant who led the crowd in a chant of “Allende vive!” in honor of the country’s Socialist Party president killed in a U.S.-backed coup in 1973.

The NYPD used its typical brutality against those committing civil disobedience. The mainstream media captured images of a woman being dragged across a sidewalk by an officer and that of another man who was taken out of Zuccotti Park with blood streaming down his face after police arrested him, allegedly for knocking an officer’s hat off his head.

But this latest round of police violence and intimidation hasn’t silenced the movement. As activists debate how to cope with the outlawing of encampments, organizing will continue on a number of fronts–from solidarity efforts to support transit workers facing contract deadlines in Chicago and New York, to challenging school closings, to occupying foreclosed homes and more.

The November 17 protests emphasized the point made on the Occupy Wall Street website as the Zuccotti raid shut down the encampment: You can’t evict an idea whose time has come.

Jen Roesch, Doug Singsen and Sherry Wolf contributed to this article. This article was originally published by Socialist Worker.