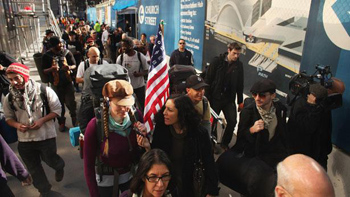 Since the financial meltdown in 2008, Wall Street has witnessed countless protests calling attention to issues like the use of bailout money for bonuses, bailed-out banks’ unwillingness to loan money to small firms and average citizens, the $25 billion “earned” by the top 25 hedge-fund managers, the $114 billion in bonuses paid out to Wall Street executives in 2010, the incestuous relationship between Goldman Sachs and top White House advisors, and the weaknesses in the Dodd-Frank bill that was supposed to rein in Wall Street. But they all failed to ignite broader public anger.

According to noted academic and activist Frances Fox Piven, far-reaching movements of social protest are impossible to predict. Piven and her husband Richard Cloward helped form the National Welfare Rights Organization, and their book Poor People’s Movements is regarded as a (controversial) classic about U.S. protest movements. Most recently, Piven assembled an anthology called Who’s Afraid of Frances Fox Piven? in response to Glenn Beck’s personal campaign against her. He labeled the 78-year-old grandmother  “an enemy of the Constitution,” triggering a tidal wave of death threats delivered by mail and e-mail.

But Piven remains unshaken. As she sees it, a fundamental structural crisis that weakens people’s bonds to the existing order is a precondition for an outbreak of “mass defiance,” but not sufficient.

“Occupy Wall Street does reflect a structural crisis,” she told In These Times in a phone interview. “There has been a steady increase in inequality and a steady decrease in the quality of the public sector. We’ve got high unemployment.”

There is simply no way of forecasting what level of shrinking opportunities and increasing humiliation will set people off, she says.

Another crucial component for the take-off of a powerful movement is a social space where people are brought together (e.g., the GM auto assembly plant in Flint, Mich., or Zuccotti Park in Manhattan) or come together on their own to explore their common grievances, build solidarity and strategize about levers of power.

For the Flint workers, the key lever was disrupting production through a sit-down strike strategy that spread like wildfire across American workplaces. Sit-downs prevented management from either taking machinery out or bringing scabs in, so they were enormously effective. (The Republic Doors and Windows occupation of December 2008 was a reminder of why Corporate America was desperate to make them illegal, as the Supreme Court’s 1940 Fansteel decision did.)

The Occupy Wall Street protesters’ social space was Zuccotti Park near Wall Street. Their leverage has proved to be the ongoing occupation of the park in defiance of Mayor Bloomberg and their constant presence at the symbolic pinnacle of American capitalism.

“The brilliant innovation is the occupation, instead of a march or a rally or a one-day general strike,” Piven enthused. “They said that they were occupying a public space. That gave them time to attract attention and build public support.“

Moreover,  their location on and near Wall Street sent a powerful message across the United States and the world. “Occupy Wall Street sits on the symbols that exemplify the fount of America’s inequality, that speaks the language of ‘we are the 99%,’” observed Piven.

“The Occupiers captured the understanding that financial capitalism is the cause of declining prospects of so many people, especially the young,” Piven notes. Further, the 1%  vs. 99% divide has transformed inequality into a major moral question.

“The movement’s moral call is reminiscent of earlier historical moments when popular uprisings invoked ideas of a “moral economy” to justify demands for bread or grain or wages —for, that is, a measure of economic justice,” she wrote recently.

On Wall Street, the extended presence of the protesters created a nonconfrontational but still very visible disruption of the routines of everyday life. The constant presence of thousands of anti-corporate demonstrators in the capitalists’ lair made news, provoked animated discussions and inspired imitators across the country.

But unlike the sit-down strikers in Flint, the action by OWS has not interrupted the flow of profits. “They haven’t been disruptive except in a minor way,” Piven noted in ther interview.

Nonetheless, the acts of mass defiance occurring from Wall Street to Chicago to Oakland are placing severe political strains on the Democratic political coalition at both the local and national levels, just as the UAW’s sit-down strikes did in mid-1930s.

While U.S.  social protest movements generally seek independence from the Democratic Party—and Occupy is clearly no exception—the reverberations of these movements inevitably create electoral tensions within the party that result in concessions aimed at easing the pressures the movements exert.

“Major egalitarian reforms in American history were the result of the interaction between electoral politics and movement politics,” she points out in Who’s Afraid of…? “Movements were nourished in the first place by electoral regimes that, because they share constituencies with the movement, were inclined to be at least rhetorically conciliatory. And movements won what they won when they threatened to cause divisions and defections among those constituencies. “

For example, “By the mid-1930s,” as Piven recounts it in her book, “mass strikers were a threat to economic recovery and to the Democratic voting majorities had put FDR in office. A pro-union labor policy was far from Roosvelt’s mind when he took office in 1933. But by 1935, with strikes escalating aand the election of 1936 approaching, he was ready to sign the National Labor Relations Act,” establishing workers’ right to a union voice and collective bargaining.

Obama continues to infuriate Democratic constituencies with his recent approval of three NAFTA-style trade agreements and playing along with the congressional “Super Committee’s” willingness to endanger Social Security, Medicare and Medicaid.

However, Obama now faces a major force to his Left that is unafraid of offending him. In the present situation, “Occupy Wall Street threatens to activate and polarize the Democratic voter constituencies,” says Piven. “It’s the only way to affect Obama.”

Pressure from the Occupy movement is likely to produce both policy concessions that serve to legitimate the movement’s cause. “I suspect that the run-up to the election will be played out with Obama moving to the Left,” she predicts. “He has largely accepted the parameters set by the Republicans, and the movement will be forcing him to move.”

This article was originally posted by In These Times.