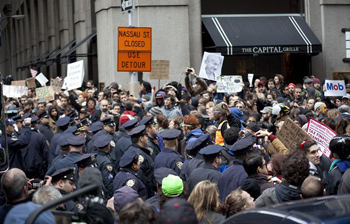 If New York Mayor Michael Bloomberg thought he was upping the ante by kicking the Occupy Wall Street protesters out of Zuccotti Park in a paramilitary predawn raid on Tuesday, Thursday, Nov. 17, was the day the movement struck back.

Thousands of protesters surged into Foley Square and over the Brooklyn Bridge, packing the lopsided V between the courthouses and government office buildings all the way from Chambers to Worth streets. Streams of students and alphabet-soup leftist sects, union members carrying the purple pennants of the building-service workers, the scarlet signs of the adjunct professors, and the blue-gear logo of the United Auto Workers. Verizon employees, a few months off a bitter strike, adjusted the company’s logo to “Verigreedy.” One young woman carried a sign written in lolcat—“Ohai, Police State! Kittehs DO NOT WANT!”

The protest had a hip-hop feel to it, though the sound system was pretty hopeless in the square’s batcave reverb. Despite the movement’s human PA—“Mic check! Mic check!”—not many phrases got through. “We’ll keep alive!” “Organize!” “Unionize!” “I… will survive.” “Occupy Wall Street! All day! All week!”

The rhythms carried the day, the rumble of drums on the back of the square a groove under the bleeping of ringtones, later made more explicit by the Occupy the Hood DJs, playing scratchy oldies like James Brown’s “The Payback” and Public Enemy’s “Fight the Power” under chants of “March! March!” The crowd oozed into Lafayette Street and headed for the bridge. Squads of restive police blocked the entrance to the Brooklyn Bridge subway station, with scores more lined up behind their bicycle-rack barricades between the march and One Police Plaza.

Over it all stood the State Supreme Court building, its gray stone marquee intoning, “The True Administration of Justice Is the Firmest Pillar of Good Government.”

That sign might be more believable if anyone from Wall Street other than Bernie Madoff was in jail for turning the U.S. economy into a giant Ponzi scheme, gambling on derivatives with ten times the value of the annual economic output of the entire world, getting bailed out by working Americans’ taxes, and then whining “class warfare” whenever anyone suggests even token regulations. It might be more believable if Bloomberg and Police Commissioner Ray Kelly’s longstanding policies of violently suppressing protests earned them prison time for violating Title 18, Section 242 of the U.S. Code, a Reconstruction-era statute that makes it a felony to deprive someone of their constitutional rights under color of law.

(That law was dusted off in the 1960s, when all-white Southern juries refused to convict racist killers; Cecil Price, the Mississippi deputy sheriff who arrested civil-rights activists James Chaney, Mickey Schwerner, and Andrew Goodman in 1964 and collaborated with the Ku Klux Klan to murder them, was jailed under it in 1967. If you want another civil-rights era parallel, you might want to compare the New York Post’s relentless slagging of the Occupy movement with the Mississippi newspaper whose story the day after Martin Luther King’s 1963 “I Have a Dream” speech focused on post-march garbage collection, under the headline, “Washington Is Clean Again With Negro Trash Removed.”)
What’s Next?
So what is next for the Occupy movement? With its campsite bases removed in numerous cities, it has to keep active and grow to survive and succeed. It has to be militant without falling into left-sectarian fetishes, and it has to be massive without falling into tepid vote-Democratic platitudes. Right now it’s tapped into a huge vein of rage against Wall Street greed and the economic injustice of the last three decades, but sooner or later there may well be a split between those who want to reform capitalism and those who think trying to reform capitalism is like trying to reform cancer.

The problem—and one of the things that provoked the Occupy uprising—is that the political techniques of the last generation haven’t worked in a long time.

Democracy is a beautiful ideal, but voting is useless when money dominates the process so much that the only choice is between loose-cannon Republicans who call Social Security a Ponzi scheme and “responsible” Democrats who hide behind evasive euphemisms about “reforming entitlements”—when it should be obscene even to think about taking money away from people who’ve worked all their lives and are now trying to survive on $13,200 a year.

Civil disobedience is symbolic, so it depends on publicity to succeed, and it’s usually ignored. Demonstrations are suppressed and ignored. Guerrilla warfare is a doomed-romantic fantasy of taking on the biggest military in the world, and it makes dissidents look like terrorists. Black-bloc-style window-breaking, in the words of a former waitress I know, accomplishes little beyond scaring underpaid Starbucks baristas.

I’m a writer, not an organizer, but it seems to me that the road to economic justice runs through the labor unions. The power to strike is a nonviolent direct-action tactic that actually disrupts things, instead of being merely symbolic. Rent strikes stop landlords’ cash flow. Labor strikes interrupt production and the normal functioning of the money machine.

People have to be creative, they have to develop mass solidarity and militance, and they have to think in terms of being effective. The one percent will not concede any demand out of the goodness of their hearts. They will concede only when they are forced to. And economic justice is a demand that threatens their very existence as the nation’s tyrannical elite.

Steven Wishnia is a New York-based journalist and musician. The author of Exit 25 Utopia and The Cannabis Companion, he has won two New York City Independent Press Association awards for his coverage of housing issues. This article originally appeared on Alternet.