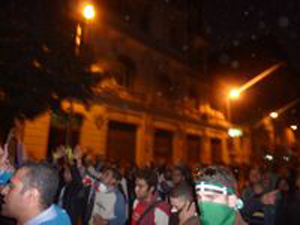 Days of clashes between protesters and security forces culminated on Tuesday evening in what was estimated to be a million-man rally in Cairo’s Tahrir Square to demand an end to military rule. The new political crisis has prompted fears that Egypt’s first post-Mubarak parliamentary polls, slated to begin only five days from now, could be called off.

“There have been running street battles between police and protesters for the last four days,” Ashraf Barouma, president of the centrist Kenana Party, told IPS. “How can elections be held under these circumstances?”

On Friday (Nov. 18), hundreds of thousands of protesters gathered in Tahrir Square to protest the policies of Egypt’s ruling Supreme Council of the Armed Forces (SCAF), which has governed the country since the February departure of ousted president Hosni Mubarak. Along with demanding presidential elections next year, protesters voiced their rejection of a raft of government-proposed “supra-constitutional principles” granting the military exceptionally broad powers.

At the end of the day, protesters – most of whom were of Islamist orientation – packed up their tents and left the square. Several dozen people, however, including the families of some of those killed in the January uprising, remained in the square overnight.

The crisis began the following morning, when security forces abruptly broke up the modest sit-in with unexpected ferocity. When Egypt’s activist community got wind of the episode, mainly through social- networking media, protesters soon began arriving at the square in the hundreds, then thousands.

For the next three days, downtown Cairo witnessed sights unseen since the 18-day uprising in January, as pitched battles raged between the interior ministry’s Central Security Forces – relying on the liberal use of teargas, rubber bullets and live ammunition – and roving bands of stone-throwing activists.

On Monday, security forces withdrew from the square, leaving it in the hands of tens of thousands of protesters – including many from major political parties and revolutionary youth groups – who vowed not to leave until their mounting grievances were addressed. Skirmishes, meanwhile, continued on adjacent streets, as protesters made repeated attempts on the nearby interior ministry building before being repulsed by security forces.

As of Tuesday night, more than 25 protesters had been reported killed and more than 1,000 seriously injured.

“What is happening now shows that the interior ministry is still willing to use the same violent tactics against unarmed protesters as it did under the Mubarak regime,” Moustafa Abdel Moneim, general coordinator of the Bedaya youth movement, told IPS.

But the mounting death toll appears to have only steeled protesters’ resolve.

“The fall of all these martyrs has served to unify our ranks and make us more resolute in our demand for a speedy transition to civilian rule,” said Abdel Moneim, who has remained in the square since Saturday.

Protesters, he explained, were demanding the formation of a revolutionary government with full powers to manage Egypt’s current transitional phase; the creation of a civilian presidential council; and the immediate prosecution of security officers responsible for killing protesters.

The Bedaya youth movement, along with 36 other revolutionary youth groups, has declared an open- ended sit-in in Tahrir Square until their demands are met. By Tuesday night, hundreds of thousands – some say more than a million – had converged on the square in Egypt’s biggest mass demonstration since the uprising in January.

At about 8 pm, under mounting pressure to issue a statement, SCAF chief Field-Marshal Hussein Tantawi finally delivered a televised address in which he announced a small handful of concessions. Looking drawn, Tantawi declared that he had accepted the government’s collective resignation and promised presidential elections no later than June of next year.

Notably, he went on to reiterate the SCAF’s commitment to holding next week’s parliamentary elections on schedule.

Many political figures, however, dismissed the resignation of the government – which was appointed by the SCAF in the wake of the revolution – as insignificant.

“This resignation doesn’t mean anything since the government had acted as little more than a secretary to the SCAF, which continues to serve as Egypt’s de facto ruler,” Magdi Sherif, president of the recently- licensed Haras al-Thawra (Guardians of the Revolution) Party, told IPS.

Protesters in Tahrir Square, meanwhile, entirely rejected Tantawi’s statement, vowing to stay put until a civilian authority could be drawn up to replace the ruling military council.

“We will stay in the square until a government of national salvation or a presidential council – with full powers to run country – is established, and until the army returns to the barracks,” said Abdel Moneim.

As for holding parliamentary polls next week, many are not so sure. They believe the initial crackdown on protesters on Saturday had been meant to provoke the violence, thereby providing justification for delaying the polls.

“The only explanation I can think of for causing this trouble only days before scheduled elections is that the interior ministry doesn’t want the polls to take place,” said Sherif.

Barouma, for his part, warned that holding elections in the current tense atmosphere could only lead to an escalation of violence.

“The post-revolution security vacuum, coupled with the recent preponderance of weapons among the public – most of which are now coming from Libya – is sure to turn the elections into a bloodbath,” he said.