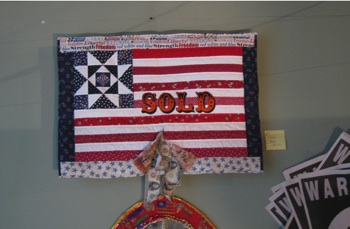 Red and black. And gray. That’s what I think of when I recall “No Comment,” a hastily-assembled exhibit in the echo-y lobby of the historic JP Morgan building, just a few blocks from Liberty Park — the epicenter of the Occupy Wall Street movement. The purpose of the exhibit apparently was not to showcase media relating to the protests — there will be enough of that in the months to come. (Over at Liberty Park, it seems, every other person is holding a video camera).

“No Comment” was something much rarer: an art show held in tandem with the protests — art as part of a movement, rather than art about a movement. Though it was only up for about a week, the show seems to have through several iterations (a new version of the exhibition may be coming to the Chelsea Art Museum). When I went on Oct. 13, I had to pick up a few paintings off the floor, and people were still installing their work for that night’s closing party. The show was being set up to be taken down.

There are, of course, reasons protest movements don’t usually spawn concurrent gallery exhibitions. For people who are big fans of both things — people like me — it always seems that art and activism should be kindred pursuits. And it’s always vexing when the two prove somewhat incompatible. It’s sad, but the slow-burning contemplation that defines so much good art often doesn’t mesh with the street-level immediacy that is necessary for effective protest. In the case of “No Comment,” there was a lot of work that could just as easily been taped to a sign and held aloft at a rally, but this wasn’t a rally — it was an art exhibition Just a few blocks from Liberty, removing this stuff from the throes of protest turns it into something strained and flimsy. In paintings and prints: images of starving African children, oil derricks, menacing businessmen and riot cops, defaced American flags and all that red and black; this work can feel (I won’t say “oppressive”) dispiritingly similar. At the same time, some of the art frustrated with its lack of discernible messages. Tunji Dada’s 2001 sculpture of post-genocidal fashion dummies didn’t know what to do with my attention once it had grabbed it. Anton Kandinsky’s recent paintings — combining high-nationalist iconography with trompe l’oeil gemstones — sport a winning pictorial audacity, but the politics are muddy.

The most effective work showed a more subtle solidarity with the movement at large, seeking out the spiritual and personal territory amidst the oil fields and broken banks. Several works included landscapes in disarray; one memorable painting shows a hellish Boschian orgy — a sort of right-wing fever-dream given strange life. Michael Greathouse’s digital collages reconfigure American money into Baphomet-like evil oracles — the sinister dimensions of wealth, felt at some level by folks across the political spectrum. Abraham Lubelski’s 250,000 works on paper (1991-ongoing) was presented here as a mass of simple, harsh little abstractions, free for the taking, packed into a trash can — Lubelski has been criticized for his practices as an art dealer (the organizers of “No Comment” have come under similar criticism), but his bonfire-ready piece really did channel some of the conflicted, semi-Utopian energy of the protests outside. Paintings by Artem Mirolevich and others, in which melancholy scrawls and whorls coalesce into animalistic figurations lack direct polemical symbolism, but feel instead like evocative gestures (little dances, maybe) in the face of a failing world.

At a show organized around an activist happening, it makes sense that one of the best pieces would have also emerged out of an activist happening: in Los Angeles several human rights groups occupied an abandoned house and asked people to contribute their thoughts on “home.” The simple photos (cats and kids and pepper plants) and handwritten notes (“where you feel safe, snuggle under quilts reading a book”) highlight why Occupy Wall Street has generated so much worldwide support: more than any one ideology or ideal, the protesters are struggling for the basics — a sustainable economy, a chance to live a decent life. After all, what happens when there aren’t enough jobs, when people can’t afford their homes, when people don’t have even the basic resources to make art or act up? No comment.