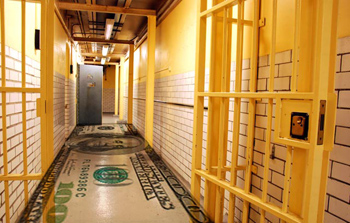 A new report released by the American Civil Liberties Union puts the spotlight on the disturbing realities of prison privatization, a multi-billion dollar industry that has exploded in the past three decades. “Banking on Bondage: Private Prisons and Mass Incarceration” is the first comprehensive analysis of privatization’s destructive impacts on the already overgrown prison industry.

In the U.S., mass incarceration separates families, consumes valuable resources and strips away the freedom—and sometimes the rights—of record numbers of prisoners, disproportionately affecting people of color. Private prison companies exacerbate these problems by feeding off of high rates of imprisonment. There have been reports of heightened rates of violence in private facilities, but for-profit prison advocates have been known to engage in heavy lobbying and campaign contributions to keep their business booming.

According to David Shapiro, ACLU staff attorney and author of the report, the lure of privatizing prisons threatens to derail serious criminal justice reform.

“Although the evidence is mixed at best, the private prison industry puts forward the idea that privatization saves taxpayer money,” Shapiro explained to Colorlines.com.

The situation in Arizona is especially disturbing. Last year, a National Public Radio investigation found that the Corrections Corporation of America, one of the two leading for-profit prison companies, played a pivotal role in conceiving, writing and naming the law that would become SB 1070. Together with other companies, it identifies immigrant detention as a strategic area of their growth plan.

While for-profit prisons may actually cost more than publicly run facilities, Arizona Auditor General recently released in a statement that reveals the state’s plans to contract with private companies to make space for 5,000 additional prisoners. Meanwhile, the burden of the deficit in Arizona’s Department of Corrections falls on the families of prisoners: the state now charges $25 per visitor for a one-time “background check fee”, an added expense that is too much for some.

The ACLU report calls out the industry for leeching billions of dollars in revenue, in some cases paying millions to their top executives. Not only do they sell thousands of prison beds to cash-strapped governments, they report says, but they also sell this idea to the general public that privatizing prisons saves money.

“If you really want to make meaningful change so that there are more funds for things like schools, roads, support for families, you need to give the opportunity for probation and parole.” Shapiro says. “That would reduce the numbers of unnecessary imprisonment. It would reduce the extent to which incarceration is tearing families apart.”